The Con Clown and the Phantom Constituents 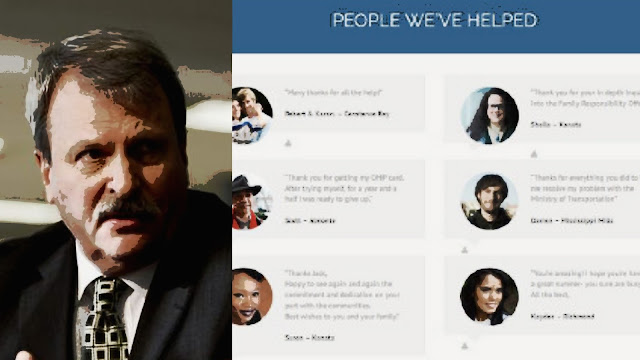 Jack MacLaren is a Con MPP in Ontario's Legislative Assembly, an absolute clown, and a constant source of embarrassment.

Just over a week ago he disgraced himself by cracking a vulgar sexist joke at a fundraiser.

A Progressive Conservative MPP made “crude and vulgar” comments to a woman who is his federal Liberal counterpart in an Ottawa Valley riding, embarrassing her and many in the audience at a “men’s night” cancer fundraising event attended by 350 people.

And now he's in trouble again. 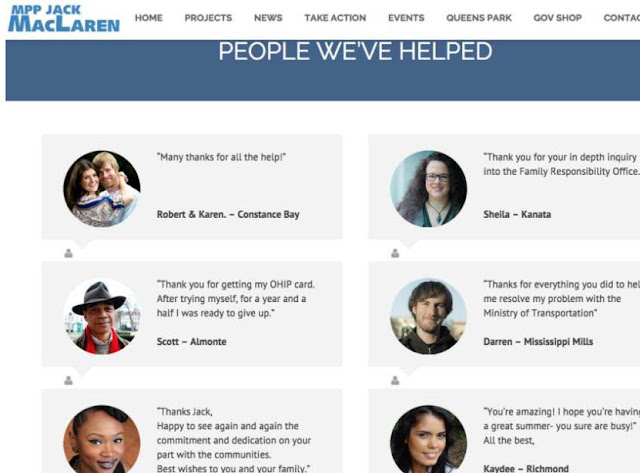 For running this page of glowing testimonials from constituents thanking him for what he had done for them.

Only to have it revealed that he didn't do anything for them, and they were just  phantoms.

Pressure is mounting on Progressive Conservative Leader Patrick Brown to discipline Jack MacLaren after the controversial MPP was forced to remove fake testimonials from his official website.

“Thanks for everything you did to help me resolve my problem with the Ministry of Transportation,” said “Darren,” from Mississippi Mills, Ont., beside his alleged photograph. But the Citizen found “Darren” is actually Sam Muirhead, a New Zealand-born software developer who lives in Berlin, Germany.

There was also a discrepancy over “Scott” from Almonte, Ont. “Thank you for getting my OHIP card. After trying myself, for a year and a half, I was ready to give up,” he said on MacLaren’s website. However, the photo of “Scott” was taken by a photographer in the Netherlands and has been swirling around the Internet for almost a decade.

And while the Con clown tried to claim that they were real testimonials, and only the pictures had been changed.

“Measures were taken to protect the privacy of individuals who provided positive feedback to my office,” the MPP said in a statement Wednesday. “While this was not intended to be misleading, I recognize that it was improper. I apologize and have asked for the content to be removed immediately.”

And the Twittersphere went wild.

Thanks for helping us get Timmy out of that abandoned well, Mr. MacLaren. #JackMacLarenTestimonials pic.twitter.com/Beig5Jew6j
— Neil Laverdiere (@Neil_mtl) April 13, 2016

#JackMacLarenTestimonials
"Jack, dude, major props. I'm sure it would have taken 8 or 9 days without your help." pic.twitter.com/wxJCZHig9G
— TheHarperGovInExile (@TheHarperGov) April 13, 2016

And as for MacLaren's boss, the sinister Con leader Patrick Brown... 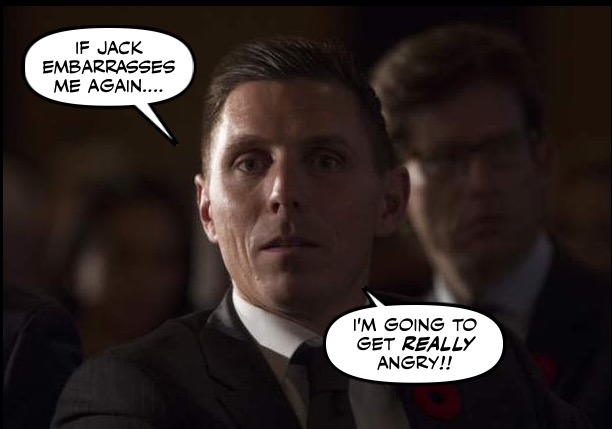 He was so embarrassed, and so hapless, he just gave him a slap on the wrist.

Brown refused to discuss the punishment options available, which could include ejecting MacLaren from caucus.

Sources said late Wednesday the troublesome MPP had been demoted from his ceremonial role as chair of the Tories’ Eastern Ontario caucus, a symbolic body that has never held a meeting with him at the helm.

When all those fake testimonials sound so familiar... 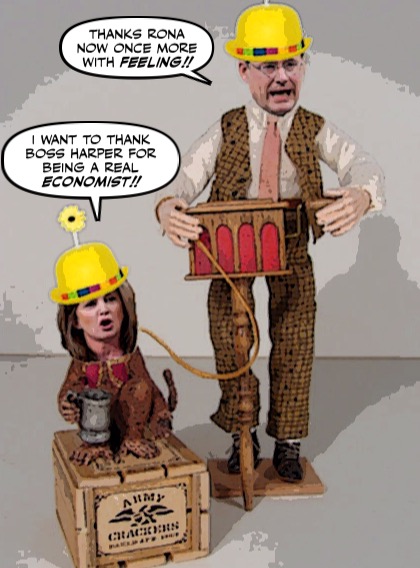 They are all Cons or Con artists,

They are the scummiest politicians this country has ever known.

And you can't trust any of them...

MacLaren is a disgrace and should have been turfed. Patrick Brown is such a hypocrite and an equal disgrace when he pledges zero tolerance for the exact bullshit this misogynist and fraud has done. Why? Because good old Jack was among the first to support Brown's leadership bid.
Here's my testimonial: Thank you so much Jack for helping me to see, to see what an absolute arse you truly are.
JD

gawd, this guy is priceless!!! You'd have to pay big bucks to see this caliber of comedian in Toronto and here we get him and all this con-sponsored hilarity for free! mcclownen is probably a rob ford school of politics early alumnus, isn't he? And to think the con leadership was worried about which inmate would run their asylum after whoodat crashed and burned...
With guys like patty boy and mcclownen around, I'd say the con legacy is in pretty safe and secure hands, ay what?

Thank you Simon for writing about this. He is a disgrace.

Thanks for this Simon. Yea, King Rat Harper is finally gone but the Con Party Is still scurrying around in the darkness and droppings.

They need to be carefully monitored, fact and reality checked. Called out for their outrageous pronouncements and actions. Hopefully the more they are caught out, the more they are exposed for their irrelevance... the better for our country's future.

with guys like that, it might help reduce the Cons to third place in the next federal election.

hi JD...I didn't realize that Jacko was an early supporter of Patrick Brown. But it's all good. Brown has been trying to peddle his redneck party as new or nouveau. And people like MacLaren only shows that they're the same old Cons...

hi anon... yes, MacLaren is a real Con clown. And the fact that he screw up twice in about a week makes me look forward to his next performance. And hopefully him and others can finish off the Ontario Cons long before the next election. Although I've got to give MacLaren a couple of points for inventing the KFC recipe... ;)

hi TS...you're welcome. He is a disgrace, and I always enjoy it when the Cons reveal who they really are....

hi Bill...yes they are still scurrying around in the darkness, and unlike the ones in Ottawa the Ontario Cons could be a threat in the next provincial election. Brown is trying to buff up their image, and the Ontario have been hit by a series of scandals, so we do have to expose Brown and his gang and knock as many feathers off them as possible...

hi e.a.f...one can only hope. The Wynne government has been making some mistakes recently, but it's still a lot better than the Harris Cons...

Thank you for reproducing my tweet, Simon. I am flattered and honoured.

Keep up your stellar work.