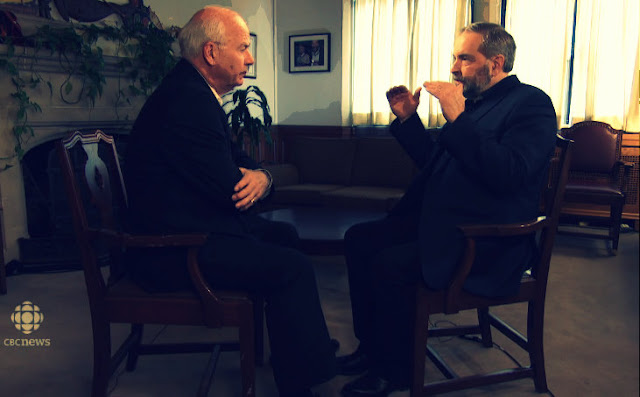 I watched Tom Mulcair being interviewed by Peter Mansbridge last night, and I have to say I was not impressed.

He still strikes me as more of a professional politician, than a genuine left-wing leader.

And this only reinforces that belief. 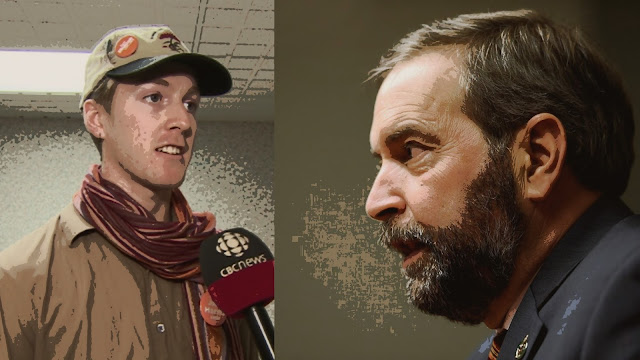 The way him and the Mulcair Party betrayed their young supporters.

It’s no tall tale that Young New Democrats worked exceptionally hard in the years and months leading up to last election, and that many of us were key organizers on campuses, local campaigns and national efforts to make sure that we replaced Harper’s government with our first ever federal NDP government.

So you can imagine our frustration as we watched scores of our peers, many first-time voters, head to the polls on Oct 19 and cast a ballot for a different party.

For I share their frustration at the way they were sent out to campaign for a boring, uninspiring platform whose positions and values they did not share.

We argued against the legalization of marijuana, against the inclusion of other parties in debates, against our leader’s participation in a debate on women’s issues, and defended our non-position on hydraulic fracturing.

Simply put, given what we were selling, it’s no surprise that our peers were just not buying it. By the time Thanksgiving had rolled around we were gasping for something inspiring, but nothing came. We were abandoned and forgotten.

I am stunned by the way they were treated like children, and cut out of the decision making process. 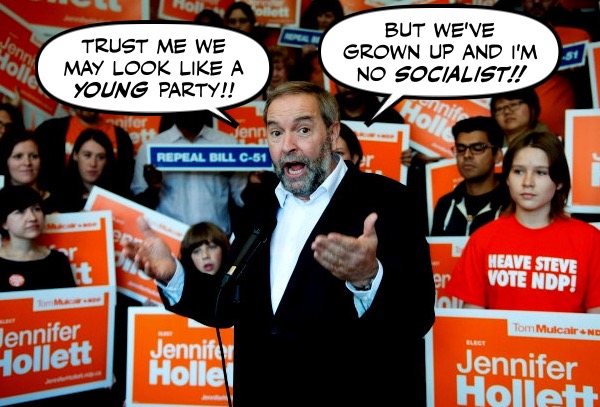 None of us were consulted or even brought into the discussion when it came to platform development — or, for that matter, when it came to the out-of-touch materials we were asked to distribute on campuses. For two years we were tasked with drumming up support for “dropping interest on credit card fees” while other parties campaigned directly on issues that mattered to youth.

For the left is the future, and it's the only way to save this country and world from those who would destroy them.

And if the decent but hopelessly old fashioned fuddy-duddies who run the way too conservative Mulcair Party don't get it, they should ALL be replaced along with their leader.

For they are only proving that the party really does need generational change... 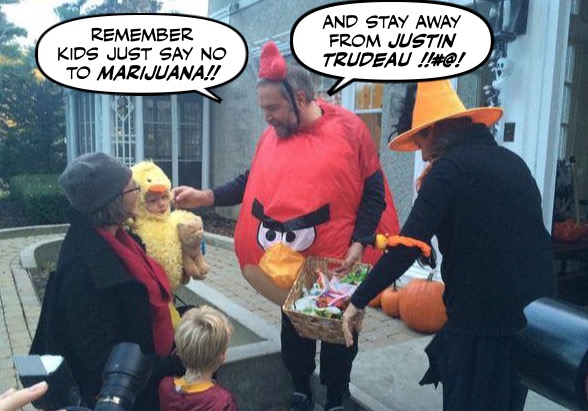 You know, I have to admit that some of my NDP friends give me a harder time than do the Cons. They get angry with me for not being hyper partisan, and never ceasing to try to unite progressives rather than divide them.

And of course, some of them are absolutely furious with me for having voted for the NDP, but now have no problem happily supporting Justin Trudeau.

I also have to confess that because I am somewhat hotheaded myself, sometimes I feel like strangling them. Or at the very least grabbing them by the shoulders, shaking them violently, and shouting SHUDDUP !!!!!

If I want to celebrate the downfall of the Con regime, and the return of a more decent Canada I WILL !!!!

But I also must say that some of them, like others across the country, are the finest young idealists I have ever known, and for that I love them dearly.

They are the future of the NDP.

They were betrayed and treated shabbily.

And for that alone Tom Mulcair should resign... 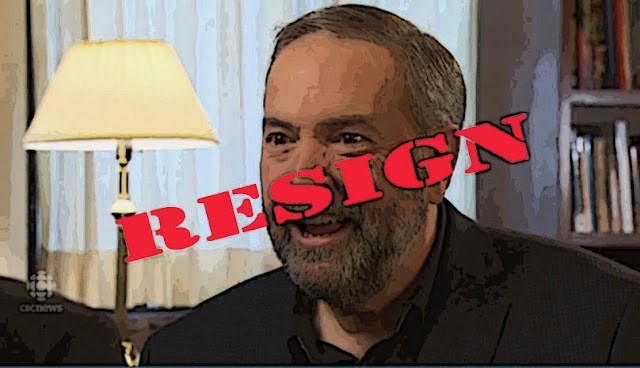 "And for that alone Tom Mulcair should resign..."
Isn't this the same mulcair reputed to have been in the liberocon party and then crossing the floor to become an N.D.P.er? If he would betray his own party then, realistically, what right do we have to expect him to legitimately run this one? I truly think mulcair sabotaged the last election to insure Trudea, who happens to be a liberocon himself, was swept into office by virtue of the absolutely shitty "new and improved" NDP platform that they pulled out of their asses as being the new direction for Canada to go in. horwath's stunning victory here in Ontario should be proof enough of what the now-tired and rundown party of "the left" has left to offer young and young-thinking real Canadians at this point in history. If mulcair is re-elected as the NDP party leader this week, it will only alienate me and quite a few other folks as well from ever bothering with them again. I will vote my conscience and conscientiously waste my vote on the Greens or Socialists forever and let the chips fall where they may. At least I won't feel sick to my stomach trying to support the piece of shit the NDP has become. The NDP is heretofore relegated to the dustbin of history until they stop campaigning further right than the libs and actually become the "party of the left" rather than the rightwing bullshit producer that idiots like horwath and mulcair have turned it into.
And fuck the niqab thing! One or two lousy issues doesn't mean you're on the left! mulcair and horwath went so far right past the liberocons that it made me ashamed to even tell people that I was in favor of the NDP at one time. . . . AND THEN WE GOT OUR ASSES HANDED TO US IN THE LAST ELECTION!
I'M SURE YOU'RE NOT PAYING ANY ATTENTION TO THIS TOM! YOU'RE TOO BUSY TRYING TO IMPRESS YOURSELF AND YOUR SMALL CIRCLE OF FRIENDS WITH HOW GREAT AND POWERFUL A LEADER YOU ARE! YOU FUCKING BLEW IT! GET THE FUCK OUT OF THE WAY SO SOMEBODY THAT CAN DO SOME GOOD HAS A CHANCE TO DO SO!
Pax Vobiscum.

Anon 7:12, Mulcair resigned Liberal Party of Quebec for very good reasons. He was a hard working principled Environment Minister who quit over the development of a Provincial Patk in Townships. My memory is foggy on details, but he didn't cross the floor, it was a different house.

Hoping that the NDP can keep him on with the Party in their next phase. He does have a lot to offer. Granted he can be rabid with his ideas at times, and could learn a lesson or two from Trudeau on the art of listening.

They tried to move closer to the center to attract a larger following. That did not work. Now it seems Mulcair has reverted to seeking support from large collective barging units. A necessity in the past but now that manufacturing jobs controlled by the 1% are disappearing and will not return their main emphasis are on public services. Ironic that struggling taxpayers who have no safety net are being ransomed to pay for indexed pensions and other benefits that they themselves will never see. There is so much the NDP could promote to bridge the rapidly changing workforce landscape but they really need to start listening to the youth and have a vision of the future.Its all about creating a supportive environment that will allow individuals to reach their full potential not by continuing to fight past battles in old ways.I have great respect for Tom Mulcair and his contribution to Canada but its time for the NDP to look to the future.
RT

And who should lead them?

I like Niki Ashton. Young, female, whip-smart, good on her feet, progressive. It's who I supported at the convention that saw Mulcair's elevation. Of course some will say the NDP has gone down the road of female leaders without much success, but I've got a feeling about Ms Ashton. I believe she could be a force to reckon with.

hi anon...well I see you feel strongly about this issue. ;) But I doubt Mulcair sabotaged his own campaign to help Trudeau, since he clearly hates him with a passion. He lost the election by running a rotten boring campaign, and for making the same mistake the hapless Andrea Horwath did, and taking the NDP to the right rather than the left.
Whether most NDP members realize that however, remains to be seen...

hi TS...yes, I think it's fair to pint that out. Mulcair did resign over a matter of principle over the development of a Provincial Park. The man does have his merits, and I'm not suggesting he doesn't, or that he is some kind of villain. I just think he's basically too conservative to lead the NDP in the direction it has to go. And he definitely should remain a member of the party for he can still contribute a lot. But just not as leader...

hi RT....yes, I know why they moved in a rightward direction. But all they managed to do was look boringly conservative-lite, and actually alienate people who were looking for change. As well as making it look as if there is something wrong with being proudly left-wing. I really don't like attacking Mulcair, for he did contribute greatly to the anti-Harper struggle, but he lost his way and led the party to disaster, and he should let others take the party in a new and more exciting direction....

hi Ben...I suggest the NDP appoint an interim leader, like the Cons have done. Put a new face on the party while starting a massive search for a new leader to be chosen in about a year, or shortly after the Cons choose their new leader. There's no need to rush things, but the NDP does need to get it right...

hi Omar...I honestly don't know much about Ashton, but she seems very bright, and she would represent generational change which the NDP needs if it's ever going to be able to compete with Justin Trudeau....