Michael Harris on the Duffy Verdict and the Harper Nightmare 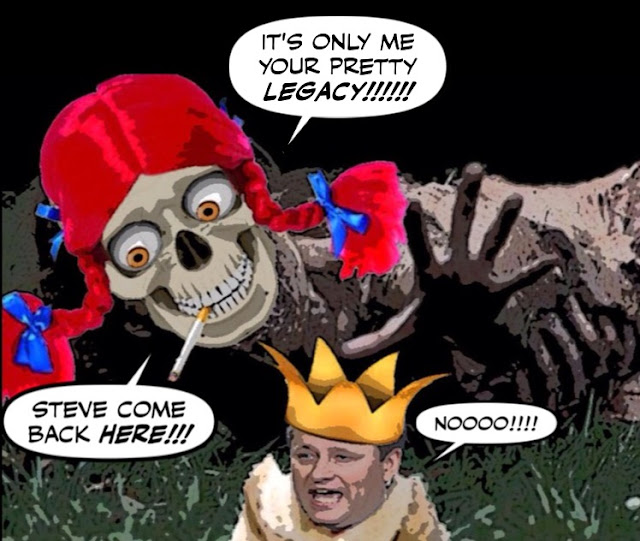 In one of my last posts I looked at the fallout from the Duffy trial.

Celebrated the way the judge's scathing indictment had damaged what was left of Stephen Harper's legacy.

Rejoiced at the way it must have left him quivering in his closet.

And of course roared with laughter at how Mike Duffy's acquittal turned out to be the ultimate payback. 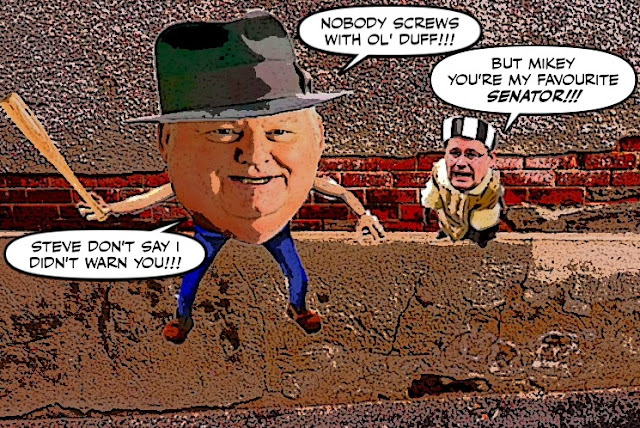 Wait,” Mike Duffy said in his last speech in the Senate, back in 2013, when he claimed Stephen Harper’s PMO had railroaded him. “There is even more.” He wasn’t kidding.

On Thursday, Justice Charles Vaillancourt acquitted Senator Duffy on all 31 charges of bribery, fraud, and breach of trust. And in a sense, he convicted Mr. Harper’s PMO.

But while there is so much to celebrate, as Michael Harris points out, the trial also raised some dark questions that must be answered.

This case is about something more than the utter demolition of a criminal case against an individual. It’s also about a justice system — at both the prosecutorial and police level — being brought into disrepute. The Duffy affair, like the robocalls scandal, played out in a landscape populated by shadowy players. Very few of them ever received much scrutiny, and society never got to the bottom of either of these scandals.

What was going on in the shadowy moral darkness of the PMO?

Why did the RCMP charge Duffy but not Nigel Wright? 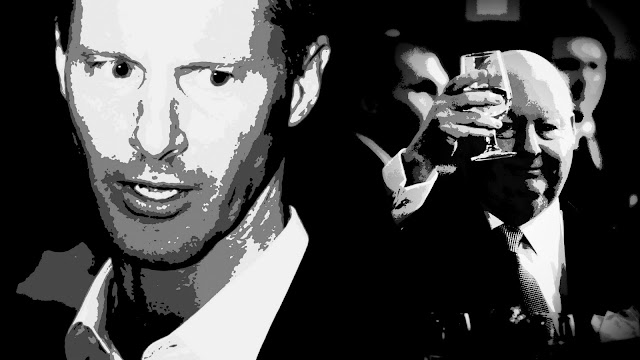 The Force conducted the investigation into Wright and Duffy and decided to exonerate the former and crush the latter. With Vaillancourt’s decision, the RCMP’s grasp of the Criminal Code looks as tenuous as that of the Justice Department. Canadians are still waiting for the commissioner of the RCMP to explain why Duffy was charged with taking a bribe while Wright was not charged with giving one.

The answer had better not be that the national police force was doing the bidding of the Harper government — or, worse, that Wright had Harper’s approval to do the deal.

And of course why was Stephen Harper never made to pay for that obvious cover-up?

Donald Trump might have called Harper ‘Lyin’ Steve’ for the multiple versions of the facts he gave about Duffygate — none of them true. The former PM insisted that the whole affair had unfolded between Wright and Duffy. In fact, more than a dozen people in his office worked on the file, pressuring Duffy to do the deal or risk losing his Senate seat.

Or for lying like a thief or a Con artist... 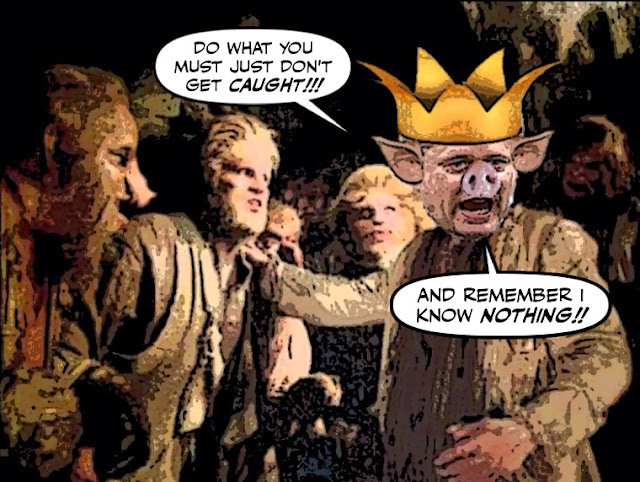 When as Duffy always claimed, Boss Harper was at the centre of that sordid  PMO conspiracy.

As Mike Duffy told me many months ago, all roads in this fiasco lead back to the former prime minister. Today proved him right. Stephen Harper subverted Parliament, politics, the inner workings of the Senate and his own party during his one-man government. But thanks to a fearless defence attorney and an unblinking judge, he was not able to subvert justice.

And there can be no justice until the day he is punished.

But as I said in my last post, the good news is that the judge's scathing indictment is just another nail in the coffin of Harper's foul legacy.

It will do him and his party enormous damage.

It can only make more Canadians demand a full public inquiry into the activities of his monstrous regime... 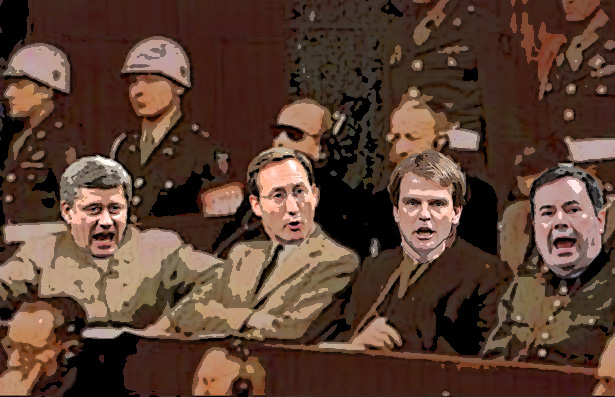 And even if Harper and his Cons are able to avoid the jail time they deserve.

They will not escape the verdict of history...

Simon, do you know if Harper, as an MP, can use parliamentary privilege to weasel out of testifying? If so, he will cling to that seat as long as possible and if not, I expect he'll flee the country.
His legacy sealed and a cowardly end befitting an ousted Tin Pot Dictator.
JD

We had a zen Mounty who thought not buying a dog was buying a dog. Way to investigate there Dudley. But our sterling accounting industry were also lost up their own ass. A top notch, top price forensic accountant couldn't find $3or400 grand, because he didn't ask about it. The fix was in.

I always thought that Muldoon meant Bryce when he sais there was no whore like an old whore but Margie's little sit and spin last night made me see the error of my ways.

Bribery seems like the kind of crime where it takes two to tango.
If one person is charged with accepting a bribe, isn't it logical someone else should be charged with offering the bribe?
That's why many Canadians are scratching their heads about why Sen. Mike Duffy has been left without a dance partner, facing the music all alone.
Nigel Wright is a morally depleted useless piece of human flesh!!!!!! I guess thats what makes Nigel such a great "Christian"!!!!! LOL LOL LOL LOL LOL
Now it makes sense when my father always told me "only bad people have to go to church"!!!! LOL LOL LOL Prime example of two faced, dishonest, dishourable scum that RCMP is!!!!!!

I am not surprised about the verdict as the Canadian Justice System usually lets the elites off. For example: this is why only the US system could nail a piece of crap like former NHLPA head Alan Eagleson to the wall because it could never be done in Canada thanks to the Eagle's connections to the legal profession, Tories and Liberals.

This is about as close as things will get for the Puffster who was publicly humiliated in the process which is good enough for me. He pretty much torched whatever status (money/power) he had (which if the satirical media is correct) because it was what he spent his life coveting.

Much like Brian "Muldoon" Mulrooney who wasn't convicted in the courts, but the Schriber public hearings pretty much crushed any attempts by him (and his media bumboys) to clear his rep among Canadians (at least those who remember.)

Same for Harper. Nothing he does now will rehabilitate his image. He'll come out for some public events, but knowing that people will point fingers or look disapprovingly in the passive aggressive way of Canadians.

As for the RCMP, they need to clean house of the top and middle ranking commanders and make it apolitical (if it ever were.)

For someone obsessed with rewriting Canadian history its must be a real piss off to realize that an Ontario provincial court judge has documented Stevies legacy in a most unflattering manner. Lyin Stevie is now destined to be a footnote in future social studies on how a democratic country can be subverted by delusional autocratic leaders.Perhaps this case will not as famous as Tricky Dick and Watergate but I am sure he will get honorable mention and like Nixon that's all he will be remembered for.Thank you judge Vaillancourt for restoring some confidence in our justice system by stating what many were thinking.Although Duffy is certainly a terrible example of a Senator working for the betterment of the Canadian people he certainly pales in comparison to an autocratic leader willing to eat his own to achieve his twisted vision for Canada.
RT

Dan, you have to stop drinking whatever has you in its grip. Duffy wasn't "let off." The case against him was rigged. It was a political show trial to give Harper a scapegoat. Duffy was to be the sacrifice. If you look into the tort of malicious prosecution you'll see this rings all the bells.

Whether you like it or not, Duffy was exonerated. Read the judgment

this is what you get when you elected religious zealots to positions of power. The are convinced their way is the right way and nothing ought to stand between them and their goals. Duffy got in the way. he was an example to others not to cross harper el al.

Poulson has to go! He has damaged the force and there morale .

hi JD...I believe it is possible to claim parliamentary immunity, under certain conditions, and for a certain period of time. But it will probably never be tested because according to his lawyer Duffy is a very sick man, is lucky to be still alive, and most probably will not have the strength to sue the Harper gang....

hi rumleyfips...there was something terribly wrong with the whole police investigation. The crown was amateurish beyond belief, and the RCMP commissioner has yet to explain why they didn't charge Nigel wright, even though he promised to do that many many months ago...

hi anon...Wright was no doubt operating under the assumption he was doing the Lord's work, by helping to keep those theocons in power. The RCMP apparently claims that he wasn't charged because he had nothing to gain personally from the bribe to try to cover-up a scandal. When in fact he was protecting the Harper government and by so doing protecting his job. So it is a travesty of justice...

Duffy embezzled money from the Canadian taxpayers, with the blessing of Harper, because Duffy was travelling around the country promoting the Conservative Party. The judge's verdict does not change those facts.

Poulson has to go for a lot more than "damage". The RCMP was damaged a long time ago. if one single employer has 300 of its former and current employees involved in a class action lawsuit regarding sexual harassment, bullying, etc. there is a very big problem.

Hi Dan...I never really cared what happened to Duffy. I always saw him as a pathetic figure. But I was hoping the scandal would damage Harper's legacy and taint the surviving Cons. And in that respect the outcome couldn't be better...

Hi Mound...please mind your manners and don't insult people who comment here or it will be the last time you comment here. You are right that Duffy was exonerated, but only because there are no rules and the crown didn't do its job. And no Duffy doesn't smell like roses no matter what you might have us believe...

Hi RT....yes, it's a great way to put a seal or a tombstone on Harper's sordid career. In the end everything went wrong. He was defeated and humiliated by a man he claimed wasn't ready. His legacy is being demolished. He never built anything worth remembering, he will occupy a tiny space in Canadian history, and after the judge's verdict his legacy will reek....

Hi e.a.f...Paulson promised he would explain why Wright wasn't charged many months before the election, so he does owe us an explanation...