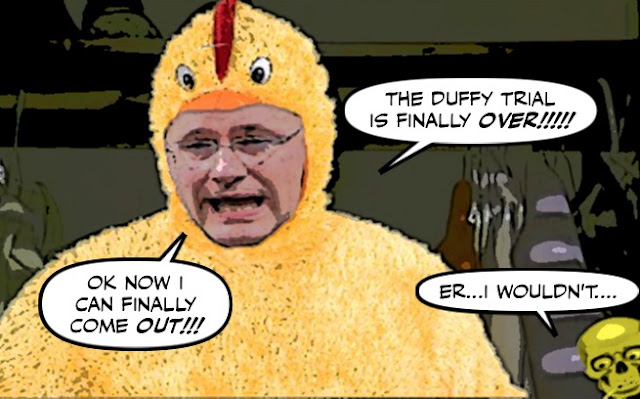 Well today was going to be the day Stephen Harper finally emerged from the closet where he has been hiding for months. The day the Duffy trial finally ended.

But sadly for Great Feathered Leader it seems he's going to have to stay there a while lot longer. Or move to Paraguay.

Because while the trial judge acquitted Ol' Duff of all charges, he blasted the Harper PMO. 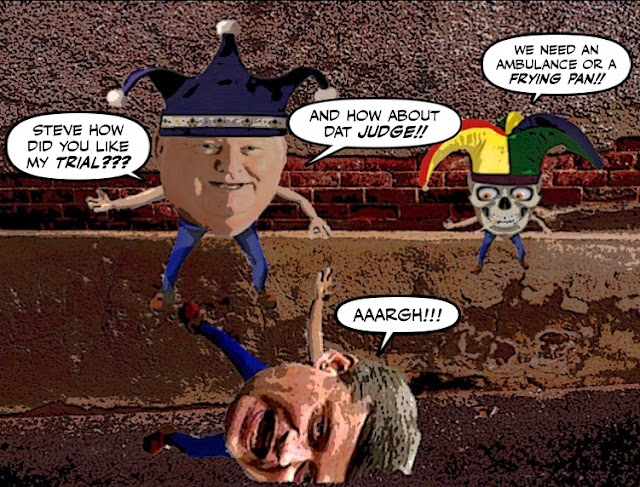 Accusing him and his political thugs of mind-boggling and shocking behaviour.

A judge has cleared Senator Mike Duffy of all 31 criminal charges and delivered a scathing indictment of the political operations of the office of former prime minister Stephen Harper. He called the actions of the Prime Minister's Office under Harper "mind-boggling and shocking."

Justice Charles Vaillancourt said that Harper's former chief of staff Nigel Wright and other PMO staff executed operations with a precision that would make any military commander proud, all with the objective of containing political damage.

Slamming Wright and his Con gang for running a covert operation to try to cover up a scandal that was threatening to embarrass Boss Harper. 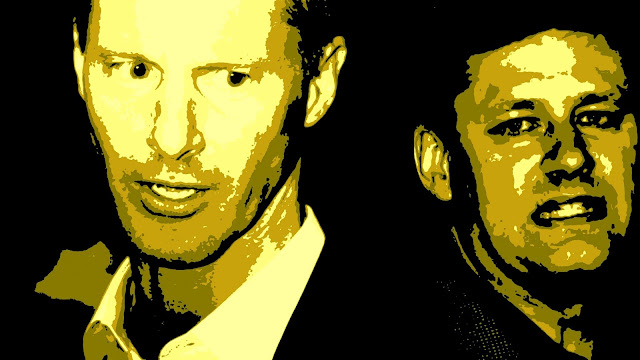 Duffy was another "piece on the chess board," and the unwilling partner in a scheme to cover back $90,000 in expenses, even though they were likely legitimate, Vaillancourt said.

"Could Hollywood match their creativity?" he asked.

Which can only raise more questions about why Wright and some of the others weren't charged.

And couldn't be a more damning indictment of Stephen Harper and his foul regime.

Ol' Duff did indeed come back to haunt him... 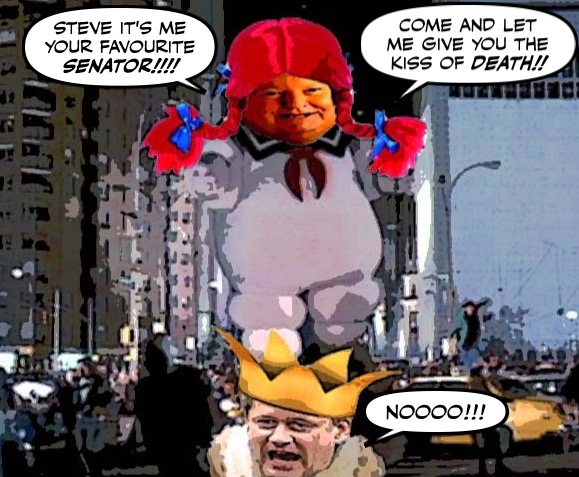 Did demolish what's left of his legacy.

Which can only humiliate Harper further, if that's possible.

And will no doubt force him to adjust what he was planning to tell his faithful followers at next month's Con convention... 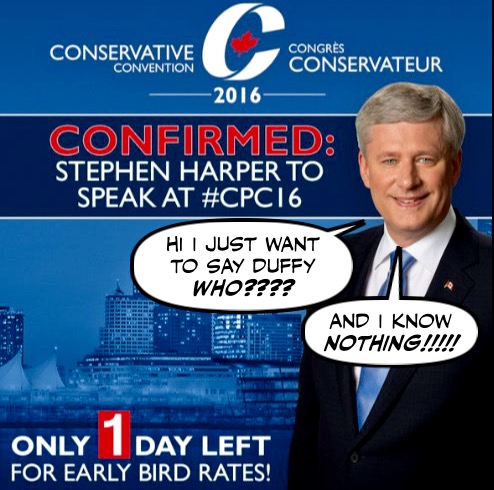 Because one really has to wonder what might happen next?

Will the RCMP re-open the case as this high profile criminal investigator once suggested.

Will it influence whether charges are laid against Pamela Wallin?

Will Duffy sue Harper and his gang? 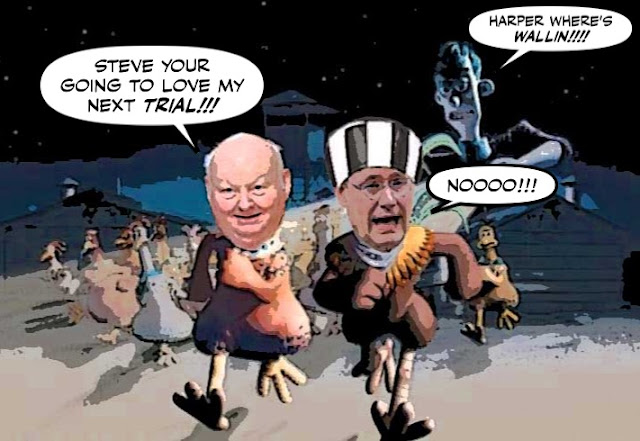 Will the Liberals call a public inquiry into the activities of the Con regime?

Will the Cons stop running this slogan aimed at Justin Trudeau? 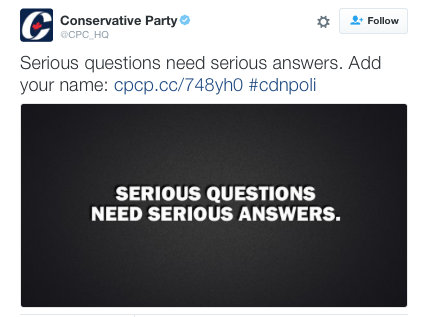 Lest it be used against them.

And Harper is taking his party with him... 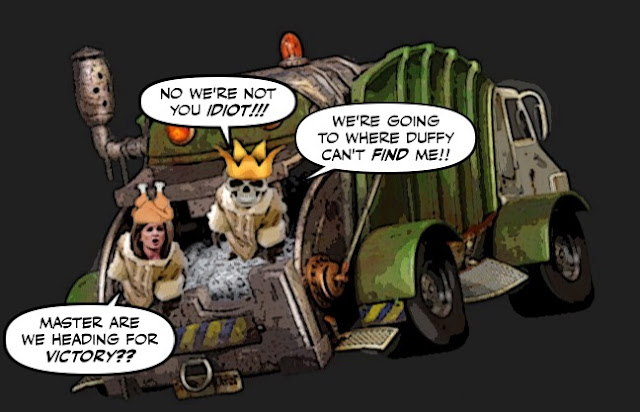 Simon - I doubt Mr Harper et al will see any criminal charges against them because there's too much back scratching among the elite in Ottawa (see Mulroney, Brian) but the lawsuit by Duffy that's coming and his tell all book to follow will be gold. Expect Harper to resign as MP in the very near future and end up relocating somewhere a writ can't be delivered to thanks to one of his corporate supporters. Harper is too much of a coward to sit through questioning by Duffy's lawyer.

Am looking forward to seeing Duffy report to the Senate. Apparently he's been preparing paper work he needs to do just that. Then there's the question of recouping the vast sum he's spend on his defense. Suing Harper et al would seem logical. Wright seems to have the dough, so he'd be a good target. Maybe Stevie has some Panama papers too. The plot thickens...

I hope Duffy is enjoying some celebrations with friends and family tonight. I even forgive home for being a conservative.

After all the millions they've pissed away on this needless trial, they better have an inquiry Simon. I hope Duffy sues as well.
What Harper did here to preserve his "image" has to be illegal at the highest level. He needs to be brought before the courts to answer for this and the sooner the better. Will he lie in court? Probably. Will his past minions cover for him? I doubt it. Nothing in it for them now.
The good I see in this is, sure, old duff was gorging at the trough, but so were the same ones vilifying him. He went by the rules.
I believe PMJT will change those rules and while he's at it, fire Bob Paulson for allowing this ridiculous trial to proceed in the first place.
JD

Who has any faith in the RCMP? Anyone? Anyone?

The Judge pretty much said it all. Now all that needs to be decided by Duffy is, will he sue. It is doubtful any case against Wright and/or Harper et al will go forward via the "justice system".

We can now wait to see what Duffy decides to do.

It is a lesson which they ought to teach in civics class, about how politicians and their henchmen can manipulate things and along the way almost destroy our democracy.

With the exception of the supreme court the Harper Cons owned the federal legal system but as the Duffy acquittal and Del Mastro incarceration demonstrates they did not own the Ontario provincial court system. Based on the outcome of these two trials one would suspect that the provincial judges saw the Harper Cons for exactly what they were.I am sure that given enough time Harper would have replaced the majority of them with clones of Vic Towes but fortunately time ran out before they could complete the job.A monumental job still remains to clean up the half finished project and haul all of the trash to the dump where it came from.
RT

That was a half-ass come to Jesus moment but no worries, her steely resolve will be back tomorrow.

Can't wait for Duffy's book to come out. He probably has written 90 per cent of it.

What the judge said about the harper government was completely justified, but Duffy himself in the beginning was pretty scummy, campaigning for the party on senate time and expenses. A tacit agreement - you do this thing and you will get a senate job. And it was suggested he would sue the government. Surely we citizens won't have to pay double for this unsavory mess. Are harper and Wright immune to law suits as ex parliamentary people? Time senate rules were made as clear as crystal if we are to put up with it in the future.

This is exactly what happens when the "private sector" take over political office. Hopefully Canadians will remember this disgraceful episode in Canadian Political history, but I doubt it. One only has to look at Saskatchewan for the answer. The old Con government there had several ministers placed in jail but they now happily vote for the Sask party.

Your pictures today are a scream Simon. I LOL. They capture the whole dirty saga of Haroers treachory in trying to destroy Duffy and his resounding loss.

Exactly. I don't understand the adoration of Duffy that I have been seeing online. Duffy, Harper and the rest of the Conservatives have ripped us off bigtime. None of them are being held accountable, and we are stuck with the bill.