The Panama Papers and the Tax Scandals of Stephen Harper 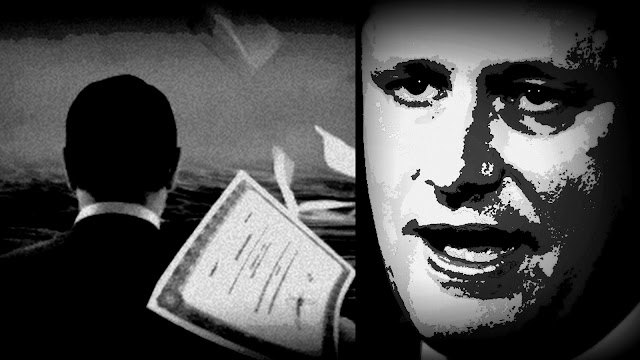 I'm glad to see that the Liberal government is vowing to go after those involved in the Panama Papers' scandal.

Revenue Minister Diane Lebouthillier is vowing to investigate whether some Canadians used a Panamanian law firm, shell companies and offshore bank accounts to evade Canadian taxes, following one of the biggest leaks of confidential records in history.

“The Canada Revenue Agency (CRA) will initiate risk assessments and, where appropriate, audit activities, based on the information that can be obtained from this data and from its treaty partners,” said Chloé Luciani-Girouard, press secretary to Lebouthillier.

And hopefully after that they can investigate the CRA, and the tax scandals of the Harper regime. 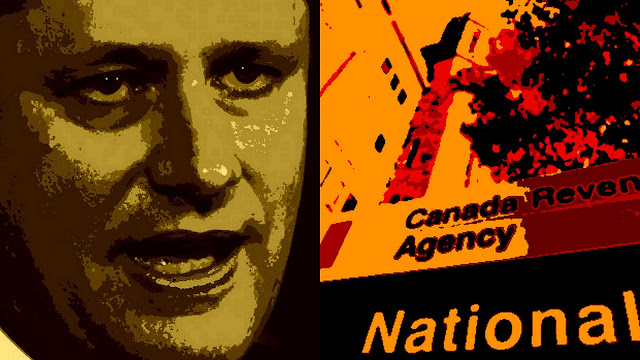 For this is scandalous

A three-year effort to estimate the amount of tax revenue lost to Ottawa because of offshore tax havens and other dodges appears to be stalled again, despite a Liberal election commitment to "immediately begin" an analysis of the so-called "tax gap."

The Parliamentary Budget Office has locked horns with the Canada Revenue Agency since 2013 in its attempt to get tax data needed to make an independent estimate, repeatedly rebuffed by arguments that the information is confidential.

The tax gap is used in other countries, like the U.S. and Britain, to determine the difference between the money that is received, and the money that should have been collected.

It is the only way to determine how efficient the CRA is in cracking down on tax cheats.

And this was criminal.

The Canada Revenue Agency is planning to cut auditors at the same time it acknowledges difficulty in tracking and collecting billions of dollars in unreported income from domestic and international tax evasion.

Planned cuts to auditors at the CRA come as the auditor general warned in November the agency is unprepared to investigate the growing amount of information it is receiving on international tax evasion and Canadians with potential offshore accounts.

For lest we forget, two years ago, even though he knew the country had a tax evasion problem, Stephen Harper was whacking auditors. 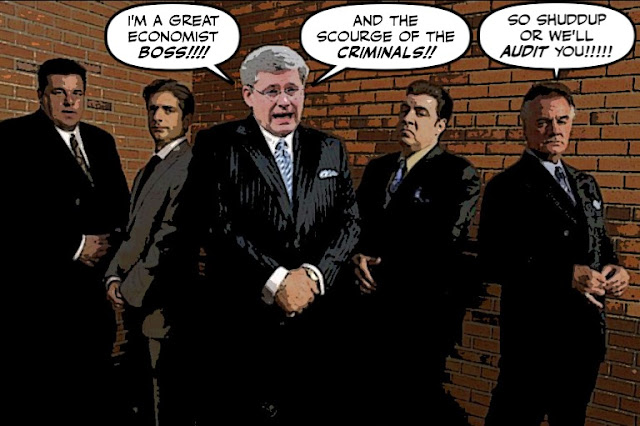 While posing as a Great Economist Leader and a Great Crime Busting Leader,

Who wouldn't give the CRA enough money to go after tax dodging criminals.

But did give it millions a few months later, to investigate the political activities of decent groups like Pen Canada.

Or this group of birdwatchers. 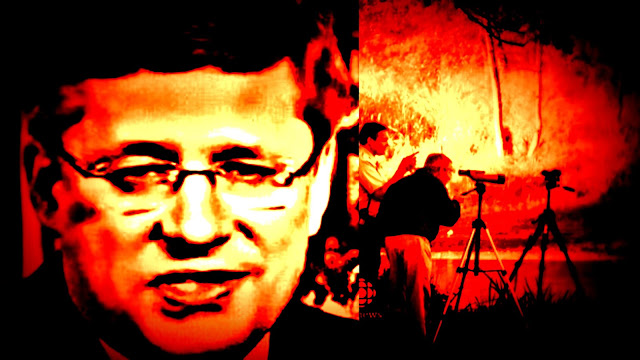 A small group of nature lovers in southern Ontario enjoy spending weekends watching birds and other wildlife, but lately they're the ones under watch — by the Canada Revenue Agency.

The Canada Revenue Agency launched a special program of so-called political activity audits after Budget 2012 provided $8 million for the project, later topped up to $13.4 million.

Which couldn't be more disgusting, or more cowardly.

But does explain why the Cons were downplaying the Panama Papers' story yesterday.

“The Conservative Party has a strong record of standing up to international tax avoidance and the Liberal should quickly determine if there has been any wrongdoing by Canadian taxpayers or companies,” his office said in a statement.

And why Rona Ambrose ignored the story altogether, but did have time to tweet this: 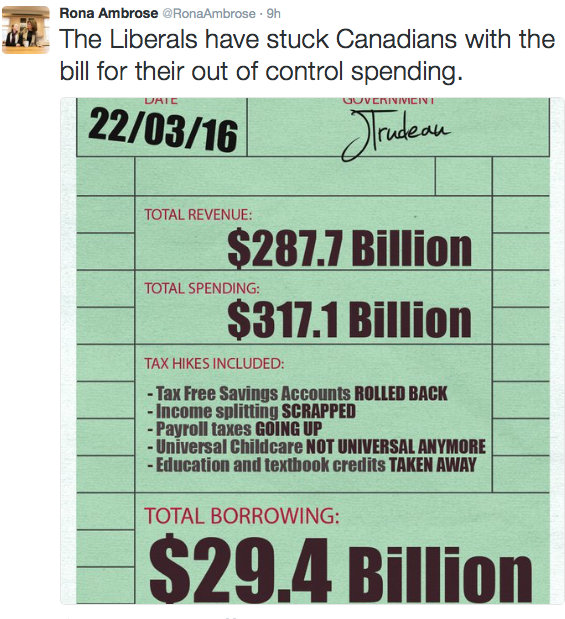 Even though all those uncollected billions, would alone make short work of that deficit.

And the reason the Cons didn't try harder to collect them is because they knew that the less money the government had, the more they could hack away at it. 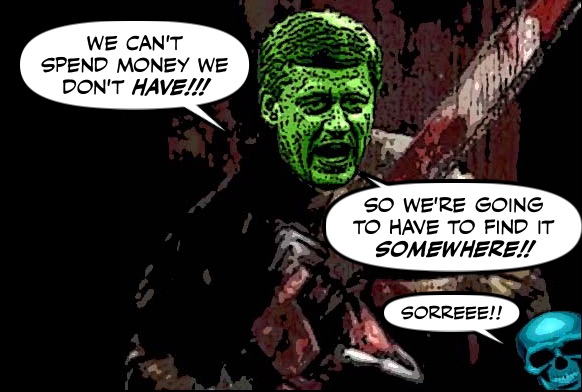 Which was the only thing Stephen Harper was ever really interested in.

And is the reason why I believe that this isn't the only scandal that needs to be investigated.

It already seems so long since Stephen Harper lorded over our nation. But before memories fade of this awful ordeal there are some critical house-cleaning items to take care of. Perhaps the most pressing is the need to uncover whether the Canada Revenue Agency was improperly taking political direction from the Prime Minister's Office.

We need a full public inquiry into the activities of the foul Con regime.

So the truth can finally be revealed.

We can find out exactly what those years in power cost this country.

And hopefully the guilty can finally be punished... 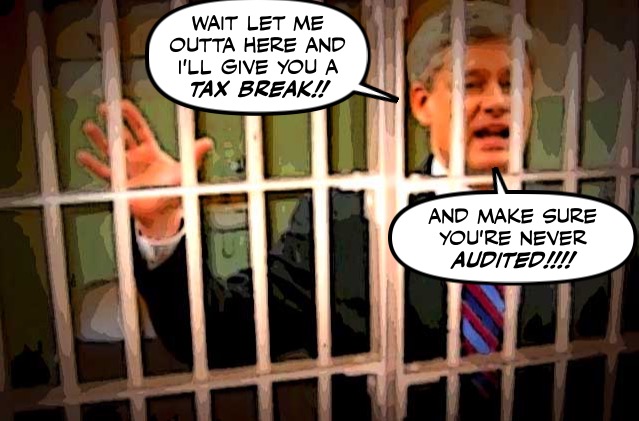 How much got deposited, from Ukraine to Harper account in Panama.

during Harper's tenure as P.M. the CRA disbanded the unit which looked into such things as corporations avoiding taxes while he spent $14M going after charities and churches, right down to the little bird watching group and P.E.N. with their $16K a yr budget. But if you have $16 MILLION OR BILLION, who cared.

The deficit, shown in this years budget may be easily over come if the CRA goes after any of those with tax dodges and of course those on the list of the Panama papers. Some are legit, but some are breaking Canadian tax codes. those need to be held accountable, the taxes collected, and fined.

As to who has their money in with the Panama law firm, it sure would be nice to know. Iceland's P.M. has already resigned. Now the son can not be held responsible for the sins of the father, but David Cameron, must have some "explaining" to do and we can understand his drive for lower taxes for the rich.

The sense of entitlement amongst the financially elite is amazing.

Governments need money to provide services to its citizens. Everybody ought to pay their fair share. The financial elite got rich in this country, they can help pay for its infrastructure.

There's no doubt in my mind that there will be links to Harper either directly or through his pals if all the names of the hundreds of Canadians linked to this are revealed.
This leak could prove to be a gift that just keeps on giving.
JD

Stop thinking the same thing I am thinking!!!!!! CRA is so not prepared to attack these offshore tax fraudsters. Being in the tax profession my good ginger snaps they are lame!!!!!!!

As Cons have labelled Canadians advocating for the environment as “eco-terrorists,” I managed to find a copy of a speech Harper wrote (but never delivered) because the Liberals won the election:

“It is the eco-terrorists who endanger our security and would take away our freedoms. It doesn’t matter what the age of the person is, or whether they’re in a garden, or planting a tree, or whether they’re in a forest watching birds or somewhere else. When you are engaged in activities that explicitly promote or advocate clean air and clean rivers, lakes and streams, that is a, serious criminal offence no matter who you are. We cannot tolerate this.”

The Man Who Foretold the Panama Papers
http://thetyee.ca/Opinion/2016/04/05/Panama-Papers-Foretold/

And where did you find that copy of an undelivered speech lol. C'mon, you don't have to have a triple digit i.q. to see this is hogwash...

JOKES FROM THE ROCK said...

Its about time that the identified Canadians will be audited by the CRA. If found guilty of tax evasion, they will be prosecuted. Resorting to voluntary disclosure is the best solution at the moment.
Visit more more information: https://taxlawcanada.com/articles/tax-evasion-and-tax-fraud/tax-evasion-prosecution-for-panama-papers-leak.php

Thank you Anonymous; for that painfully ironic tid-bit.