Bernie Sanders and the Rise of the Pro Democracy Movement 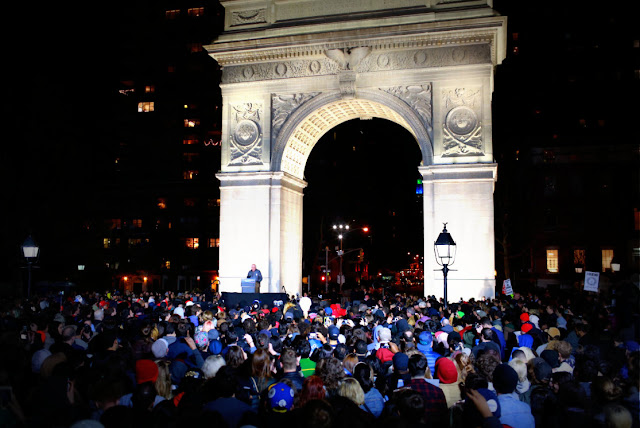 And although it was one of the biggest rallies of the campaign, CNN and other TV news channels all but ignored the event, and Sanders' message.

But it doesn't really matter because he is mobilizing the future... 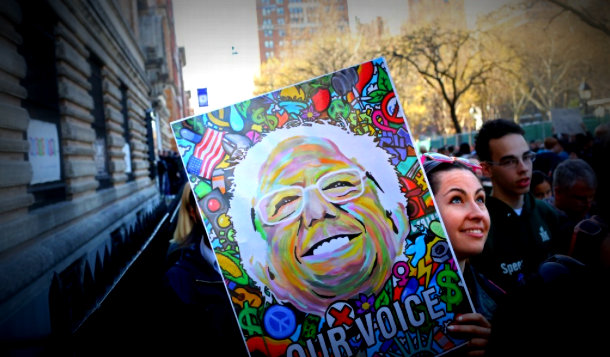 And the pro-democracy movement is spreading all over the world. 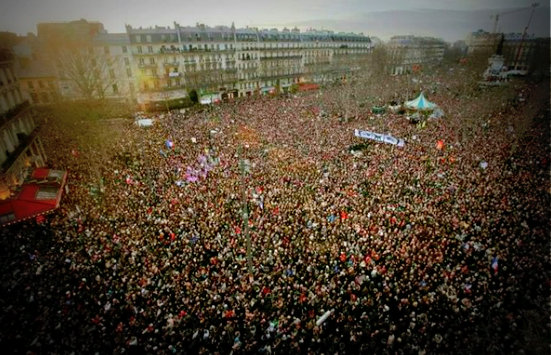 In France they're calling them the Nuit Debout or the Up All Night protests.

Demonstrations this weekend were held in as many as 60 cities and towns across France as well as in Belgium, Germany, and Spain, according to reports, as an estimated 120,000 protested against austerity, globalization, increasing inequality, privatization, and the continent's severe anti-migrant policies.

In Britain thousands have been demanding that David Cameron resign for his role in the Panama Papers' scandal. 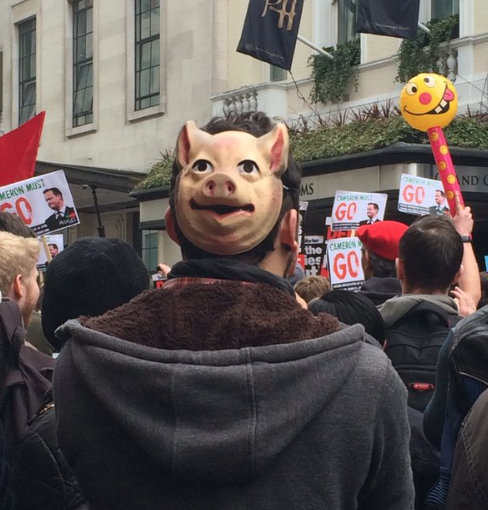 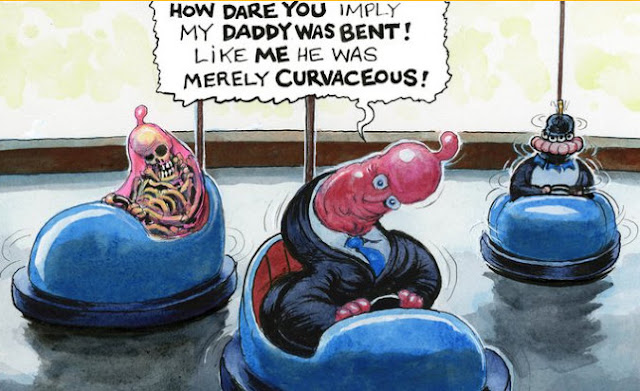 And in Hong Kong, Joshua Wong, one of the leaders of the so-called Umbrella Revolution, has formed a party to take his revolution for change from the streets to the ballot box. 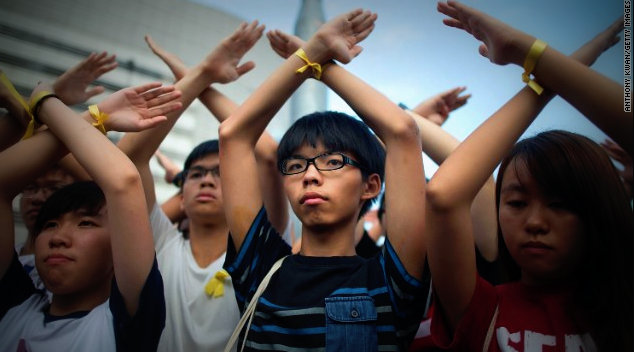 "Street activism is not enough if we want to fight for a better future," he tells me. "We have to enter the system, create a political party and shape the political agenda, in order to drive forward our movement for self-determination."

And I must say I love this poster for that new party... 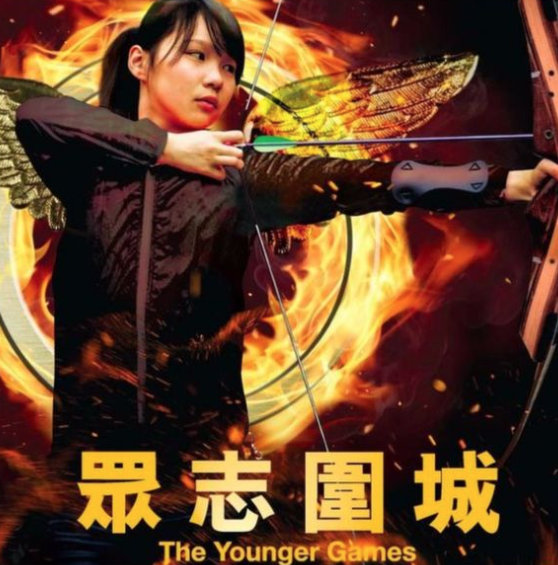 Because it tells me that the young of the world are waking up, getting engaged in the political process, and pushing for real change.

Almost two years ago at the time of the Umbrella Revolution, I made a video to show my solidarity.

And I think its spirit still lives...

You know, when you read some of the gloomy posts in the progressive blogosphere these days, you'd think the world was going to end tomorrow, and that we're all doomed.

And that poisonous pessimism is enough to make you feel like crawling back into bed, or killing yourself.

I believe we can change the world, and save it from those who would destroy it.

I believe in the future.

And of course I believe in Bernie... 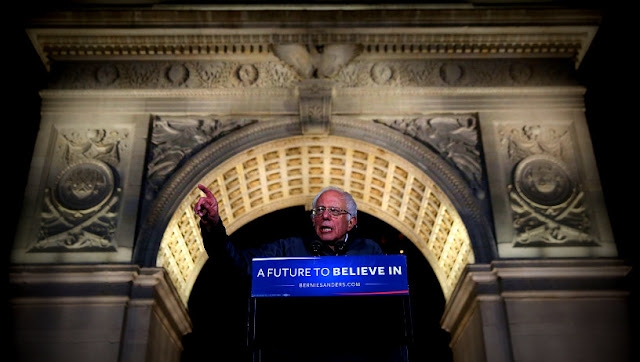 so far the milleniuals are sending a message and its, its not business as usual. They want change. That's a good thing.

Bernie Saunders has given the political elites in the U.S.A a run for their money and sent a very strong message. he may not become President, but next time, some one with the same message and organization might. Change will come

Yes hope is everything. We don't have the luxury of laying down on the sidewalk and waiting to die. Because our children and grandchildren will be left paying the bill. They will face the terrifying consequences of all our irresponsible actions (Baby Boomers and Gen-Xers.)

Bernie is FDR bringing a New Deal to the world before the fascist revolutions break out. Time is also a luxury we don't have.

Bernie could change the direction Justin Trudeau is taking. Right now we might as well have Ben Mulroney as prime minister. Bernie plans on $1-trillion in stimulus. The Canadian equivalent is about $100-billion. Trudeau offers $10-billion over 2 years which is actually less than his promised $6-billion a year increase in infrastructure spending.

The New Democrats could bring the movement to Canada. And this whole thing is about a progressive grassroots movement. Linda McQuaig might be the ideal leader. She's spent the last 30 years exposing all this plutocratic corruption. So she knows the subject matter inside and out. Like Bernie, she's someone who can be trusted. Someone who never supported neoliberal economic ideology. No corrupt establishment agenda.

Bernie is the wake-up call. Nobody thought FDR could do it. But he basically created modern living standards as his Keynesian New Deal economics were carried through into the post-war era. So yes it can be done. And yes these policies are tried-and-true.

"We have always known that heedless self-interest was bad morals; we know now that it is bad economics." FDR, 1937

Even the Guardian doesn't cover this properly!!!

you'd think the world was going to end tomorrow, and that we're all doomed.
Well politically things may be looking up a bit in various parts of the world from Myanmar to the USA. Things like Podomos (sp?) in Spain are definitely encouraging.

It looks like the younger generation is coming to realise that politics is important and realising that a lot of politicians of any stripe are career politicians and unlikely to press for radical change. Oh where is Elizabeth May when one needs her.

On the Climate Change front we are in deep doo-doo and it's piling up fast. WE'RE DOOMED!!! Sorry about that, I feel better now.

However re climate change--- the Paris meeting and steps by such countries as the US and China are very encouraging but they are tiny first step. Still the old adage that "Every journey begins with a single step" holds. At least most countries seem to have seriously recognised the drastic nature of the problem.

Great post Simon! Lovely video. I like to think that Canada has had a small part in the way the world seems to be going when we threw Harper out. Will be interesting to see Saunders in Rome over the weekend.

US voters in states with a large white working class want change, but are unsure of what kind of change. In the mid west rust belt Republicans want an authoritarian bully. In New England, Democrats want a 60's socialist. Any real revolution will have to reconcile factions inalterably opposed.

hi e.a.f...yes the millennials are finally waking up all over the world, and they are fuelling Bernie's revolution. And you're right too, he may not win but change is coming...

hi Ron...good lord we agree on something at last. Hope is everything, if Bernie wins he could push Trudeau further to the left, as well as inspiring people all over the world. And yes, if the NDP is smart it should bring that movement to Canada. But as you know I have my doubts about that one. I mean we can't agree on EVERYTHING...; )

hi anon...no they don't. The Guardian is a good publication, but whenever they confront a homegrown threat to the establishment like Jeremy Corbyn, or the Scottish National Party, they suddenly become very conservative...

hi jrkrideau...I don't want to minimize the challenges we face, especially on the climate change front. For they are daunting. But I find too many would rather mope and wallow in despair instead of getting off their asses and actually encouraging those fighting for change...

hi TS...I'm glad you liked the video. It was banned in Germany for some reason, but I enjoyed making it. I realize the kids in Hong Kong face powerful enemies, but I have always admired their spirit. And I love the fact that Jason Wong has founded a party even though he is too young to vote...

hi rumleyfips...Bernie Sanders is up against all those factors you mention, as well as unfortunately the African American, and the power of the Democrat establishment. But whatever the result, what he has started will continue, and politics in America will never be the same again...