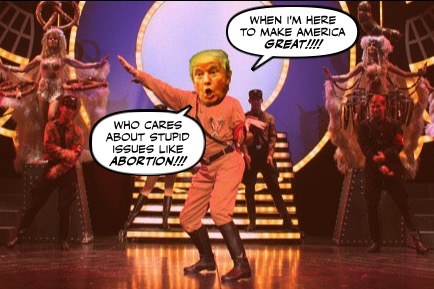 But Donald Trump is looking and sounding a lot less confident these days.

It was a REALLY bad week.

Trump is facing the toughest test of his campaign after a week in which he veered into a series of unexpected controversies and -- for a change -- seemed to struggle in his response.

His parade of missteps on issues ranging from national security to abortion have left the Republican front-runner wading through his roughest patch yet on the campaign trail.

He has a massive problem with women. Seven out of ten of them now hold an unfavourable opinion of him.

The Republican establishment is in a full blown panic, and claiming he could not only lose the general election.

"He has completely turned off huge swaths of the electorate. His numbers have continued to get worse. He would get absolutely massacred on a historic scale (in a general election). All of the data demonstrates it."

He could also blow up the Republican Congress and the party itself.

And sadly for the Republicans they could be right. Polls do suggest that in a general election both Bernie Sanders and Hillary Clinton would beat him handily.

Trump now trails Clinton by 9 points in the HuffPost Pollster polling average and by 11.2 points in RealClearPolitics' average — and he's behind Bernie Sanders by even more in both. Any of these showings from Trump would be the weakest performance from a major party nominee in the past 20 years.

And so desperate are the Republican bosses that many of them are now backing Ted Cruz... 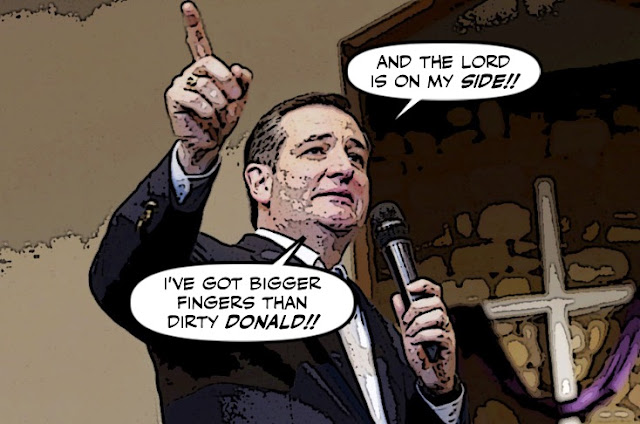 Even though he's a tool of the religious right, who believes that a woman should never be able to get an abortion even in the case of rape or incest.

Which should make him really popular with female voters.

And even though most of those Republicans absolutely detest Cruz, as The Donald himself pointed out yesterday.

Even if he didn't run the full quote from Cruz's Princeton roommate.

"I would rather have anybody else be the president of the United States," screenwriter Craig Mazin told the Daily Beast in 2013. "Anyone. I would rather pick somebody from the phone book."

Which tells me, along with all those gaffes that Trump has been making, that he doesn't have a very good political organization.

The sequence of events not only tests Trump's Teflon aura but also calls into question his unique method of campaigning, which relies on off-the-cuff calls from the gut, assaults on political correctness and an unusually small-scale political operation around the billionaire.

And only strengthens my belief that in the beginning at least, Trump's campaign was just a half assed attempt to boost his brand. That he wasn't really serious about running for President, he just wanted to reap the free publicity.

Until he realized he could actually become an accidental president.

And now the joke is on him.

So I'm glad to see that Jimmy Kimmel agrees...


And the best news?

The Trump story may not end exactly like that, but the ending will be ugly.

And when it's finally over the Republicans will not be laughing.

The billionaire buffoon came out to play, and blew them all out of the water...

Things could change, but Trump's foreign advisor team seems to be hand picked yooouge foreign policy gurus in the same way as his 'hand picked' real estate gurus at his crap fest of a 'university'/scam. No one knows what the hell they're talking about or doing with very real bloody consequences for every misstep.

I'm laughing because the Repubs spent 08 and 12 comparing Obama's supporters to a cult and Trump's base goes out and show it was psychological projection all along.

If Trump had been a little smarter he would have told Matthew's MSNBC the US Supreme Court had a already ruled on abortion.Then shut up.

In the meantime he's right on some things and not so much on others.

Donald Trump has been making many revolutionary proposals.
Unfortunately, they have often been obscured by the furor over his fumbled remarks about abortion and the pulsating hatred of America’s Republican ruling class.

The media have attacked Trump like a school of enraged piranhas. A contrived incident mounted by the hard right wing tried to make his campaign manager, Corey Lewandowski, look like a woman abuser. I met Lewandowski two weeks ago in Palm Beach. He’s a reserved person and certainly no abuser.

Last week, Trump claimed the USA was paying too much to sustain NATO. It was time, he asserted, to cut way back on US financial support and get Europe to pay its fair share for “protecting itself from threats.”

More outrage greeted Trump’s attack on the post World War II status quo. But he was quite right. The US subsidizes about 73% of NATO’s total military, economic and social costs. NATO’s European members pay only about 1% of their gross national product.

I would be surprised if Trump goes to the convention. He is nor emotionally strong enough to lose and will find an excuse to quit the race ( they are being unfair to me ). This is exaggerated by the probability of being beat by a girl; something Trump's fragile male ego cannot stand.

Anon 10:41 NATO has guidelines for funding, based on GDP and defense spending spending, and under these guidelines the US is paying what they had agreed to. IMO this is not nearly enough because the once defensive organization seems to have become a tool for US aggression and American hegemony.

Trump has made many contradictory and controversial remarks, often bringing to mind the quote “Sometimes I believe in as many as six impossible things before breakfast.”

Many people can meet an abuser and not be aware of that fact they are an abuser. What is your secret to claiming you can recognize one by the mere act of meeting?

I didn't meet him.Eric Margolis did.Guess you didn't read the link.I did watch the video though concerning the alleged abuse on the female reporter.Where is the abuse?

hi Dan...yes it really is an insane clown posse show isn't it? Give them a week in power and they could blow up the world. Fortunately however it looks like their dangerous incompetence is finally showing, and hopefully Trump won't get anywhere near the White House....

hi anon...some of the things Trump says do make sense, and account for the fact that there is some crossover between his and Sander's supporters. I for example believe that NATO has outlived its usefulness, and is now an organization in search of a war. But the problem is that so many other things Trump says don't make sense, and some of them are dangerous. The truth is he isn't properly prepared to be President, and he doesn't have a proper organization to keep him on an even keel...

hi rumleyfips....that may be so, but right now Trump is making noises about a third party candidacy, so he does seem to believe that he can still be President. God helps all, because every day his foreign policy announcements sound crazier and more dangerous....