There's a Reason They Call It the Conservative Broadcasting Corporation 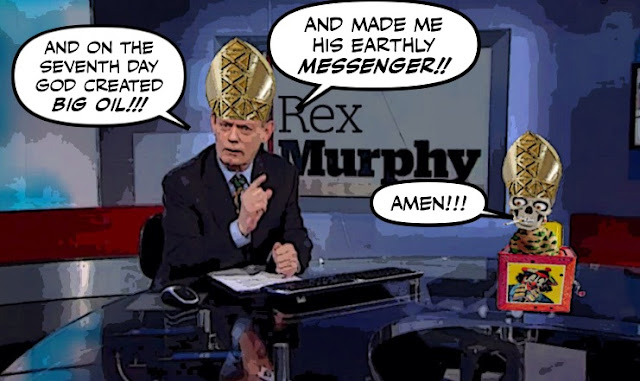 As you know, I frequently question the judgement of the hapless stooges who run the CBC.

I question how they let a shabby tea bagger and climate change denier like Rex Murphy act like the high priest of Big Oil on The National, their flagship news program.

Or for that matter, why on the day the Duffy verdict came down, with its scathing criticism of the Harper PMO, the National led its newscast with fifteen minutes on the death of Prince.

But then there's a reason they call it the Conservative Broadcasting Corporation. 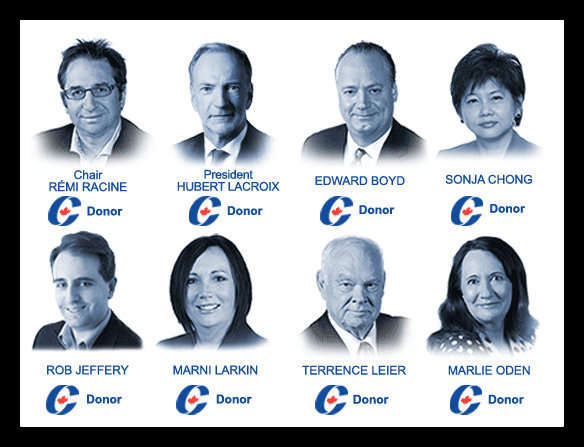 Because that's a lot of Con supporters eh?

Even without the one who didn't make it into that group photo. 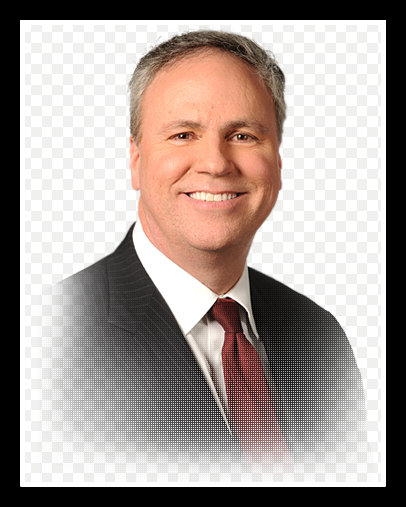 A member of the Canadian Broadcasting Corporation's board of directors has resigned from his position to seek the presidency of the Conservative Party of Canada, The Tyee has learned. Brian Mitchell, a Montreal lawyer, confirmed that he resigned Sunday after eight years on the government-funded broadcaster's board of directors and its pension board of trustees

Who is riding to the rescue of his party.

And no doubt, along with the other Cons, looked on loyally or cheered wildly, as Stephen Harper gutted the CBC... Or bled it dry.

The scary part is that the remaining Cons will determine how the $675 million the Liberals just gave the CBC will be spent.

Which is like asking the fox to save the chickens.

And yes, if we are going to take back the CBC, like we are taking back our Canada, we have to get rid of that Con board. And replace it with one based on merit not party affiliation.

We need to purge the upper ranks of management.

And of course we need to fire this ghastly teabagger... 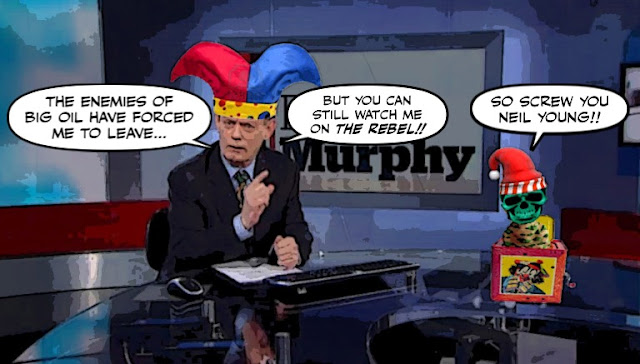 I wrote to the minister. I have been tweeting her. It requires some sort of combined effort to get her attention it seems.

Can someone please explain to me, why someone like Rex Murphy, a paid shill for the oil industry, is allowed to use a government platform like CBC, which is paid for by Canadian taxpayers, as a vehicle to launch his bullshit reality on what these criminals are doing to our fresh water supplies and our enviroment?

I friggin despise that ignorant, bullshitting Rex Murphy bye!!!!!! The most stupid Newfie to ever leave the rock..... But thankfully we Newfies are some happy bye that his ship sailed to the mainland my son!!!!!!! Good riddance to that bad rubbish!!!!!! He rates up there with Candy Bergen.......maybe she is Rex in drag???????? CBC.....ever what the crew on Power and Politics giggle and giggle. What is the meaning of this one sided, useless, so called news program? If Stockwell Day can appear on it, bye they are scrapping the bottom of the barrel at CBC!!!!!

the CBC needs a new B of D. One which is a tad more diverse. perhaps people interested in broadcasting, Canadian talent, people who actually watch the CBC, you know some taxpayers. The Liberals could be really, really daring and appoint some people who actually aren't members of political parties or give each political party a specific number of seats or any member of the Canadian music hall of fame, all retired members of Canadian hockey teams, you get my drift, any one but these Cons.

as usual, as much as I dislike Rex Murphy and what he says, I still believe the CBC needs to keep him in his job. we need not all sing from the same song book. He has a following and they also have the right to be represented on the CBC. Its a freedom of speech issue.

Write the minister. Tweet the minister. Get her attention. We can gripe on line but if we want change we have to gripe at those who can bring it about. Bombard her with tweets.

hi anon...good for you. I don't know what the minister can do, because getting rid of the Harper appointees isn't easy. But any pressure that can be brought to bear on the government is a good thing. For until those Cons are cleaned out the CBC will not reflect our culture or our values....

hi GreazedLitenen...don't ask me, I've been asking the same question for years, and getting no answers. It violates every journalistic principle in the books, and makes The National look pathetic. At any other organization I'd suspect the hand of big oil, but at the CBC I fear it's just the incompetence of its managers. Or the cronyism of people like Peter Mansbridge who protects his friend Rexy....

hi anon...you're lucky he left the rock. He ran for the provincial Liberals not once but twice. And if he hadn't lost, he might have been your premier today. And then you'd have to leave... ;)

hi e.a.f....in an ideal world the members of the CBC board would be some of the brightest people in Canada instead of political hacks. And they would help the corporation become more exciting an relevant, instead of suppressing good ideas, taking no risks, and vulgarizing their program schedule. Thank goodness I believe in public broadcasting or I would have given up long ago....


Since 2007, the CBC has been presided over by lawyer Hubert T. Lacroix, who used to work at the Canada’s most powerful corporate law firm, McCarthy Tétrault, as a business lawyer. He’s embraced, without complaint, every effort by the Harper Conservative Federal government to kill off the CBC. Meanwhile, the CBC board is made up of Conservative appointees, most of whom have business or corporate law backgrounds.

Is anyone else as annoyed as I am that Jennifer McGuire has decided that if we want to comment on the CBC Power & Politics programme we have to go to facebook? Isn't CBC supposed to bring Canadians together rather than divide them.