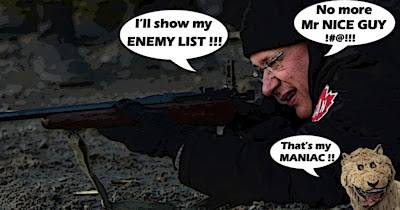 I suppose we should have seen it coming. The strange look in his eyes when he fired that rifle.

The way he kicked off his Great Escape Tour by attacking the opposition like a rabid walrus. While holding up what looked like a handcuff.

And now the Third Sign of the Con Apocalypse.

The unmistakable sign that Stephen Harper is preparing to go to WAR.

Changes in the senior staff ranks at the office of Prime Minister Stephen Harper and at the Conservative Party’s headquarters signal a hardening of battle lines as the Conservative government heads into 2015 campaign mode.

Many of the shifts amount to a retrenching of Harper’s troops that will see experienced but young politicos take over key jobs, bringing their undivided loyalty to Harper and no-holds-barred approach to the government’s top office.

Because now there are no moderating voices in the PMO. Just a bunch of young right-wing fanatics who would do ANYTHING to win, and pleasure their deranged cult leader.

And with Jenni Byrne, the most uber aggressive Con operative of them all, now galloping around the PMO...

You can be sure the Cons will be rolling in the mud like they never have before. And going after their opponents like a pack of wolves hogs from hell.

Because all you have to do is read Byrne's Twitter feed.

To know where this one is going eh? 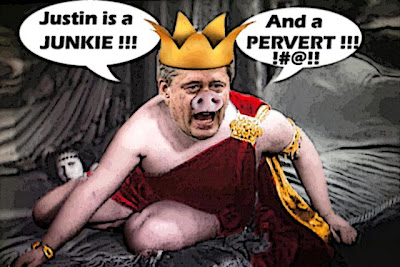 And if you thought you had seen Great Ugly Leader crawl through the gutter before, you ain't seen nothing yet.

Because this is not the kind of PMO that runs a new/nouveau government. This is the kind of mob that will wage war on all those on its Enemy List.

And the most depraved and dangerous gang of Con fanatics this country has ever seen.... 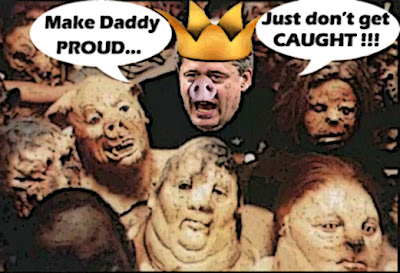 But then I suppose Stephen Harper felt he had no choice but to surround himself with his most loyal freaks. The ones he suckled himself. Because in his advanced state of mental degeneration they are the only ones he still trusts.

And the good news?  None of this will make him more popular. It will only make him look more crazy desperate, even dangerous. And convince more Canadians that it's time he went. Before he does more weird and dirty things.

As for the new gang of young fanatics in the PMO, the senate scandal will no doubt whip them up into a frenzy, until they're all howling at the moon. Or saying and doing horrible things in the middle of the night.

For all they need to do now is appoint Ezra Levnt as the new press secretary, and It will be Teabagistan on the Rideau. Stephen Harper will be out of control and so will his little fanatics.They will feed on each other. Until they make a terrible mistake. Or they are caught. Or the old Cons in the caucus revolt.

The moves are interesting given last spring’s explosive departure from caucus by MP Brent Rathgeber and the problems he highlighted from a caucus member’s point of view. The Edmonton MP was fed up with being forced to take orders from “unelected staffers about half my age.” He suggested the Conservative party had lost its way after seven years in power.

And then if we're lucky, his own monsters will consume him... 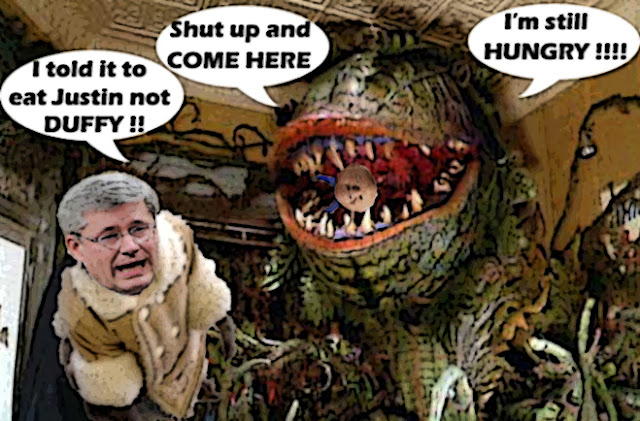 But if they don't, we will. And if they want a war then that's what they'll get eh?

For this insane nightmare has lasted long enough.

And it's really time it ended...

I think most Canadians, his hard core base, and even his corporate sponsors are getting tired of Steve.

Steve is like yesterday's newspaper, blowing down Sparks street.

based upon his comments today I would not be surprised if he is going to surrender on pot and de criminalize to blunt Justin.

Jenni Byrne is a greasy Con cultist. That dumb Connie makes KKK Ann Coulter look rational. She as director should be held accountable for Connie robo calls, as illegal as they were, and which also did not identify where they came from and broke CRTC rules. She's a typical lying loudmouth Conservative crapologist.

“For this insane nightmare has lasted long enough.” No sir, we're just arriving at the “compounding mistakes” phase, where it starts to get extra-tasty-crispy. Stevie needs an XL decision, but Syria's in the limelight for Oval Office attention, so Stevie gets to hurry-up and wait, which ruins any operational timing. Meanwhile the Senate-Duffy-Porkela problem festers. Who knows if there might be a chestburster-type surprise in the next few weeks? The F-35 is a turd of a problem, waiting its turn to be back in the consciousness, too. Remember, Murphy loves Stevie.

hi anonymous...I think you're right, even some of his strongest supporters are getting tired of him. And I like your image a lot. Make it a newspaper used as a fish wrapper, and it would be even better... ;)

hi Steve...I'm also wondering the same thing. I think he could go for the police proposal,which would make him look a little more hip, but wouldn't really change much. As I've written before, the marijuana issue may pale in importance to others, but it is a significant marker of change. And I don't think Jarper can afford to be on the wrong side of that one...

hi wazz...Byrne certainly embodies the worst habits of the Harper Cons. She is an old reformer, a Harper groupie, and if anyone can drag the PMO even further into the gutter, she is the one...

hi Edstock...yes I thin I should have been clearer. It's my nightmare because I am so damn sick of the man and his rotten government. But hopefully it will soon be his nightmare as all his crimes come home to roost. I too feel that the Cons are in for some unpleasant surprises. And maybe I should just sit back and make sure I have enough popcorn, because the end of the Con regime should be ghastly but alose BEAUTIFUL... ;)