Is Mike Duffy Planning to Take Stephen Harper to Court? 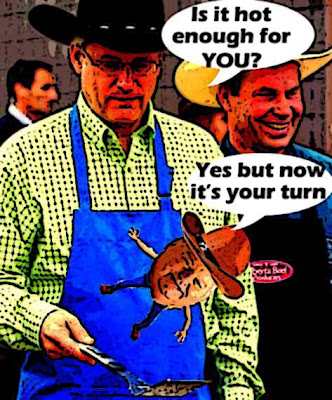 OMG. It's come to this. Stephen Harper and Mike Duffy are no longer good BBQ buddies.

Old Duff feels he's been roasted enough by the PMO, and now he wants Harper to feel the HEAT !!!!

If the RCMP investigation into Mike Duffy over alleged breach of trust reaches court, the senator’s lawyers will call Stephen Harper as a witness and grill the Prime Minister under oath, sources said.

Or feel his PAIN.

Mr. Duffy’s lawyers have barred him from speaking to the press but he has told friends that he feels he has been thrown under the bus and that the Conservative PR machine is out to destroy him.

Golly. Isn't that a stunning development ? And I thought Pammy was the only one he had to worry about...

Because you better believe she's not going quietly either eh?

Not with this kind of ammunition in her purse.

Postmedia News reported Thursday that new senators, including Mr. Duffy and Pamela Wallin, were told that they could bill for certain partisan travel. Also Thursday, the auditor general confirmed he will perform a comprehensive audit of the expenses of all senators.

Both developments will be welcomed by Mr. Duffy and Ms. Wallin, since it seems unlikely they will be the only senators who fall foul of the auditors. There are already rumblings that Liberal and Conservative senators will join forces to try to limit the scope of the audit to the 2011 and 2012 calendar years (Mr. Duffy and Ms. Wallin’s audits went back to include 2009 and 2010).

Because now it's not just her and Old Duff.

Now the whole Senate is in a PANIC !!!

Gobbling back at the PMO. Or planning a mass retirement party.

While the stories about Harper preparing to abolish the House of Pork Turkey, that I wrote about here, are getting louder and louder.

The expectation of many Senate watchers is that the Prime Minister will campaign to abolish the Upper House, based on the alleged transgressions of Mr. Duffy and Ms. Wallin, in an attempt to wedge Justin Trudeau’s Liberals, who advocate retaining a reformed Senate. “If the provinces or the Supreme Court tries to stop him, he looks like a hero to the base,” said one senator.

And I haven't the slightest doubt that the voices in Great Ugly Leader's head are heatedly debating the disadvantages of abolishing the Senate (national unity crisis etc etc) versus the sheer joy of screwing Justin Trudeau. And that the screw Trudeau AND the Senate faction is winning.

Even though the outer Steve once had nobler pretensions.

And such an abrupt reversal will only make it look like he's trying to put a pair of cement shoes on the Senate, as well as Duffy. And cut the scandal loose with a chainsaw, before any other Senators start gobbling or SQUEALING.

That won't help his mobster image. And neither will having to testify in court, for let's not forget that there are many questions about the Duffy Affair that have never been answered. And if Harper is compelled to answer them under oath who knows what might happen?

And of course if Old Duff gets even MORE pissed off at the PMO, and starts telling all those stories he knows. The ones he sniffed out all over Ottawa. The ones he used to tell the old drunks at the Press Gallery for the price of six beers.

Great Shattered Leader might find abolishing the Senate the least of his problems... 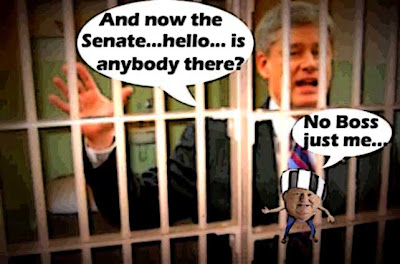 Can't you just hear him:

"I Stephen Harper promise to tell the truth and nothing but the truth, so help me God."

Wouldn't that alone be worth the price of admission?

Lordy. You know, the other day I said the summer was so cold and grey it REALLY felt like I was living in Harperland.

But since then the sun came out. And now that the Senate scandal is starting to look like a prison drama. And the Cons are fighting themselves.

Suddenly I feel like I'm back in Canada again eh? 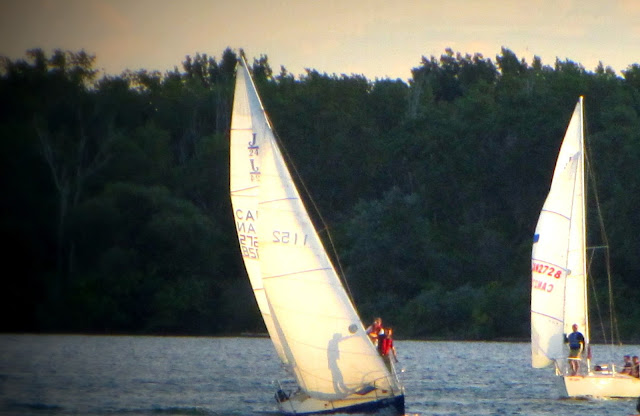 Anybody have a copy of Jail House Rock?

Canada is a vast pit of corruption and Harper controls absolutely everything in this country. Harper uses every dirty tactic in the book to stay in office. Harper is corrupt, evil and vile. Don't count on Harper not getting away, with this crime either.

Harper prorogued Parliament so he wouldn't have to answer for his crime of, the torture of the Detainee's. Harper stonewalled and blocked his, robo-call scam investigation. Harper was in contempt of the House. Harper misled Canadians. Harper's economic and job action plans are bogus. He thieved our tax dollars for his misleading lies. Harper has got away with handing Canada over to Communist China. Harper's Omnibus Bill gives China permission to sue Canada if, anyone tries to block China's takeover of Canada. China sued in BC to take the, 200 BC mining jobs away from BC and Canadian miners. Harper's FIPA deal with China, allows that country to be in Canada for 31 years. Everyone I know, signed the petition against, Harper's FIPA deal with China.

That's only the tip of the ice berg. Harper is the worst, most corrupt evil PM in the recorded history of this Nation. Harper belongs in prison for, being a Traitor to Canada, doing acts of Treason.