Pamela Wallin and the Corruption Cons 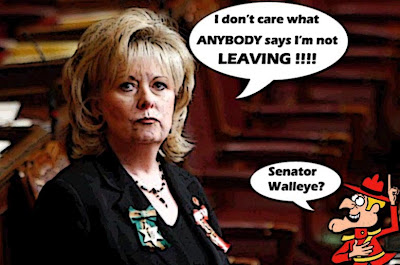 Well in the beginning of the end it was almost an anti-climax eh?

Another damning report, another Con Senator being investigated by the RCMP.

The independent audit of Senator Pamela Wallin's expenses has been referred to the RCMP by a Senate committee that is also imposing restrictions on her travel and asking her to repay more of her expenses.

Another Con hack blaming others and refusing to resign.

And although I quite enjoyed the way the Walleye Jumbo landed...

Nose to the ground and ass in the air.

I wouldn't be surprised if Wallin manages to walk limp crawl away from this one.

Because she's got more than enough money to repay the full amount she charged the taxpayers.

And hire a good lawyer... 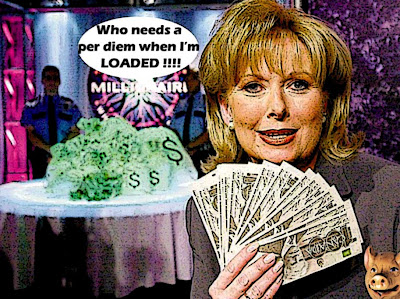 And I'm sure she will also find a way to get around this:

The Senate report also places restrictions on Wallin's future travel, recommending: The Senate only authorize direct flights or immediate connecting flights between Ottawa and Saskatchewan. All other itineraries be pre-approved by a Senate committee. All of Wallin's travel claims be monitored for the next year. 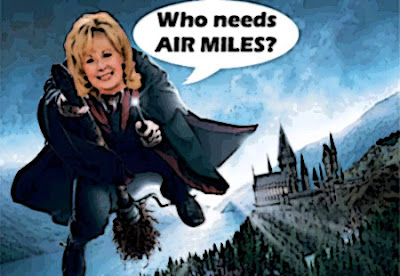 On a broom stick, or a balloon filled with her own hot air.

On the other hand, the police take a dim view of those who would try to cover-up the facts, so if we're really lucky we might get TWO Con Senators for the price of ONE.

And of course whatever happens it's only going to hurt Stephen Harper. Because he PERSONALLY reviewed Wallin's expenses and found them satisfactory. Which makes it look like he either can't count, or he's an absolute idiot.

And now he's facing the possibility that not one but THREE of his most recent Senate appointments could end being convicted of some crime or the other. Which must surely make even the dumbest Canadians question his judgement and/or his SANITY.

While the robocall scandal swings like a pendulum over his head, and just about EVERYTHING the Cons touch smells like shite.

An ethics watchdog and at least one politician are raising questions about how it was possible for a Manitoba MP to resign and take a new job in the private sector hours later.

And this at a time when Great Ugly Leader is trying to put a NEW/NOUVEAU face on his government.

Good luck with that one... 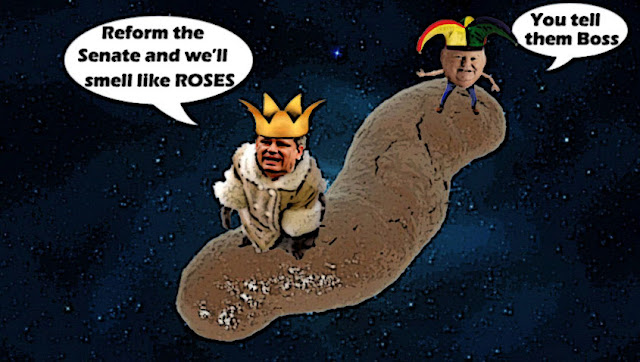 Because you can be sure that we will use all these sordid scandals to smear him with the stench of corruption all the way to the next election.

From Ottawa, to New York, to Toronto, and Wadena.

Yup. The Corruption Cons still flying on a wing turd and a prayer. But not for much longer.

Today we laugh at them, tomorrow we will DESTROY them...

Simon, my friend, have you forgotten that Dear Leader stood in Parliament and loudly proclaimed that he had personally looked over Wallin'S claims and there was nothing wrong with them that he could see compared to other Parliamentarians from that region? Then he even went on to mock Mulcair for not reporting the attempted bribery incident sooner. Can't wait for Parliament to start to see how he is going to explain that one, eh? Already some people are predicting that he would suddenly be very busy travelling the world on important national business.

hi anonymous...I mentioned in my last post, and was planning to use it in this one, but it slipped my mind. So thank you for reminding me to add it, as I have. I don't belong to the carved in stone school of blogging and firmlt believe even my posts can be improved. ;)
Seriously though, it really is something we should mention as often as possible, since it REALLY makes him look bad. Pammy gets an A for her stirling efforts to make the Cons look bad. And he gets a D for DUMMY...

My thought exactly but it as moderated by the CBC.
What do you call a conservative senator under scrutiny in a fish tank? A Walleye.

Now I'm pissed off with the CBC . Not a mention of how the NDP wants to eradicate the senate for the last 50 years. People say that all parties are guilty . That may be true to a limited degree . But as far as the NDP and the senate they are 100% innocent

Anon 2:15am, I am not in favour of abolishing Senate because I feel our PM already has too much power and I'd rather limit it further than enhance it. However, even for those who disagree, to take this position for the last 50 years is simply not good enough. The NDP, along with the LIberals and CPC should have been working all those years to improve it and to ensure it had proper oversight and rules. In that way, all the parties are guilty of simply not doing enough to ensure Senate functioned efficiently and properly.

I don't think abolishing Senate will improve our governance, and will likely make it worse when we have PM's who exploit their power to the fullest. However, I suspect Harper would be very happy if he could get rid of Senate and with Mulcair pushing it too, and with all the scandals, this will probably be a popular view that Canadians will embrace. To explain the power concentration in the PMO is probably a losing battle in today's politics. So, while I disagree with the NDP position, it will likely be a vote-getter for them. We'll see.

Harper appoints a few Cons who he enables to abuse the Senate and VOILA! He has nitwits running to and fro declaring the entire thing is worthless. Harper justs wants people to think it should be abolished. This is staged corruption. For national decision-making to be legitimate in any Parliament or Republic the virtually universal rule is that you need something more than the assent of the House majority; you also need the assent of the regions that make up the country. For a long time Ontario and Quebec have had enough inhabitants that they could impose their will on the rest of the country. Ditto in the U.S. for a handful of big states. That is the vital role played by upper chambers like the Senate: they confer greater democratic legitimacy on national decisions by ensuring that a double majority is needed.

Totally disagree with anon 8:14am. It's in your opinion it's not good enough opinion. But the senate was originally created to create an elite upper class of Canadians who would ensure that democracy would not prevail be the rabble (elected) voted on something that was not in the interest of the monied elites in Canada - hence why the NDP has always advocated abolishment of an unelected house of overlords.
I know the Trudeau the Jr. who is a inherited millionaire wants to keep the Senate around by appointing Liberal party bagmen (women), patronage and failed candidates. He is a part of that elite class so I get it. As we already see, we have one liberal senator in jail and serving time for padding his expense claims, and Harb right now who was a bigger porker than the 3 cons.
We need to abolish the house of pork and institutionalize PP in the elected house.

hi anonymous...well as long as they all end like this fish:

hi anonymous...Don't worry, you can't count on the CBC for much these days. But people will make up their own minds, and I'm sure that the NDP's plan to abolish the Senate is growing more popular every day...

hi wazz...to be honest I'm not quite sure what to think about the Senate. On the one hand I like the idea of a Chamber of Sober Second Thought. On the other hand making the Senate more powerful could undermine the House of Commons or lead to paralysis. And Harper's slew of rotten appointments has undermined any credibility that institution has left. I would prefer to see the regional disparities you mention dealt with by something like the existing Council of the Federation. But I think it's too late for that, the train has left the station and is heading for the end of the line...