Sammy Yatim and the City of the Dead

I've now seen all I need to see about the police execution of Sammy Yatim.

Almost more than I can bear to watch. And like Rosie DiManno, more than enough to sicken me.

I am sickened that a teenager with a small knife, who’d done nothing more hostile than shout profanities, was felled by a hail of bullets. I am sickened that a suspect already shot and dying was then Tasered. I am sickened by the sight of the officer who’d fired the volley of bullets being pulled back by other cops, as if he needed to be restrained. Again I ask: Who was the impetuous and maddened instigator in this cast of characters?

Like so many others I have so many questions. Why did his self appointed executioner fire NINE bullets at the teenager when the first one brought him down? What was he thinking? What killer frenzy was he in? And why was he a police officer in Toronto, Ontario, CANADA?

But the question that haunts me the most, and may never be definitively answered, is what was happening to Sammy Yatim in the moments before he was killed? 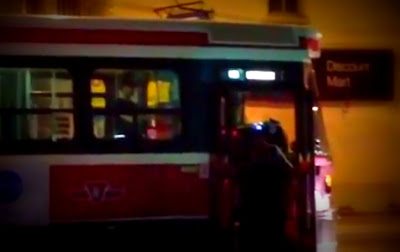 “He didn’t pay me any attention. He just walked right by me,” said 28-year-old Doyle. “He seemed angry. He was very focused on something at the front of the streetcar. I’m not sure if it was the people or just one person in particular.” When Doyle saw Yatim, the knife was in his right hand and his left held his exposed genitals.

Why was that usually quiet shy teenager exposing himself, and walking around with a knife pointed straight up, more like a light saber than a weapon? Why didn't he attack anyone?

Was he angry or frightened? Did he really beg for a chance to call his father?

Just moments before he was shot and killed by police, did Sammy Yatim beg to borrow a cellphone to call his father who was away on a business trip?

There have been several unconfirmed tips suggesting Yatim told the TTC streetcar operator he “wanted to call his dad” and that the driver was prepared to let him before instead opting to exit the streetcar. 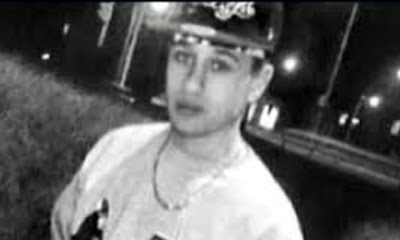 Before he was brought down by a hail of bullets like some dangerous animal.

And was he really there in that fatal streetcar? Or was he back in the hellish place he had escaped from?

Aleppo, the Syrian City of the Dead... 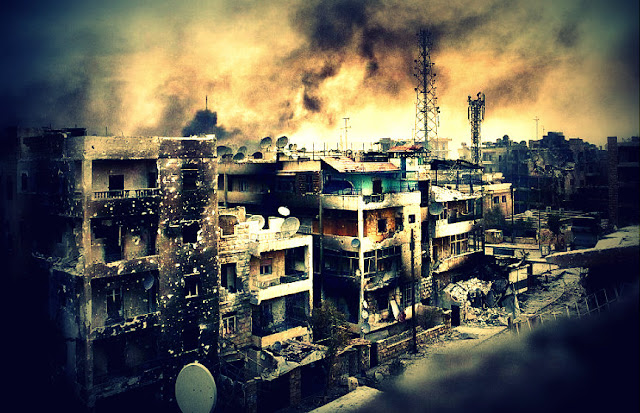 The UNESCO World Heritage site reduced to a feral place of brutal violence, and neverending horror.

His mother still lives there, so do his childhood friends. He missed them. He must have been worried about them. He tried to fit in, but how do you ever escape a place like that?

Did that horror, combined with the stress of having to leave his father's home for smoking marijuana, and all the other pressures of being a teenager and an immigrant, finally cause Sammy to crack up?

Did the police shoot another mentally ill person? Like Edmond Yu and so many others? 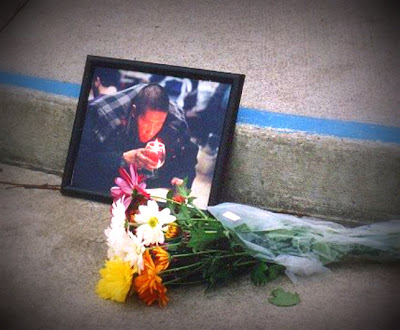 A person acts out, the cops show up, bullets fly, and the person dies. It could happen to you, your son, your brother, your cousin, your friend. It happens too often here.

Did they learn NOTHING from all those deaths?

That the aim of crisis resolution should be de-escalation and the resolution of situations without physical force.

That police officers, whenever possible, should maintain a sufficient reactionary gap to give them the time to disengage, tactically reposition themselves and or react in such a way which prevents a situation from escalating from the verbal to the violent.”

And when is enough ENOUGH? For this slaughter of the mentally ill simply cannot continue if we are to call ourselves a civilized country.

Let's just hope the senseless brutality of Sammy's death shocks the public into demanding better from our police forces. So it never happens again.

So his short life has some meaning. Instead of just savage irony.

Who escaped the City of the Dead.

Only to be murdered in Toronto... 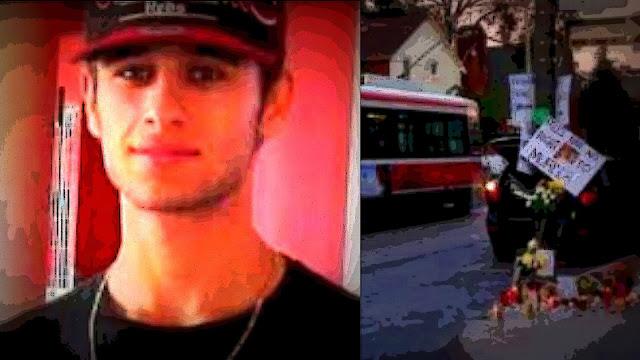 Bunch of trigger-happy Walter Mittys.
and yes, I do get to second-guess the cop on the beat, because I AM HIS EMPLOYER FFS...

Make cops get an education. Most of them are grade 12 testosterone fuelled morons that went to cop school. Reminds me of that asshole who shot Dudley George at Ipperwash - who was unarmed. And then lied about it to the Inquiry. Get these crazy boneheads off the force; bring in some with an education and brains in their noggins.

Excellent post. I don't know what else to say.

Canada has become a, sordid vast chasm of corruption. When Canada was a Democracy before Harper, very, very little of this nightmare of death occurred. Because of Harper there is no, honor, decency, ethics nor morals left in this country, what-so-ever.

What works in a Democracy, doesn't work in a Dictatorship. Harper has a list of degenerates as long as his arm. They do Harper's dirty work for him. When they are caught, Harper throws them under the bus.

Incidents such as this, will never be stopped under Harper's dictatorship. Harper does not care about human lives. Isn't that obvious since, he used his robo-call cheat to win the election?

In some cases police officers start shooting and simply, can't stop. There have been some studies on the matter. This is why, in these stand off situations, officers should not be permitted to fire unless they have someone from their negotiations dept. in place. It wasn't like the kid was holding some one as hostage. The officer should not be permitted to return to working outside. If he is to remain employed it ought to be at a desk.

We saw what negotiations did in Montreal. 20 hours later the stand off was finished and no one died.

The video shows a number of police cars and officers but there is no evidence anyone was in control of the situation. There is no evidence the police officers had a little conflab about what to do. Mr. Yatmin could have stayed on the bus for hours, why shoot him? I don't know how to resolve this type of situation, because it has happened all over Canada. Some of it maybe due simply to the stress everyone is under these days.

You would think a police officer could deal with a young man and one knife without resorting to using a gun, nine times. Did anyone think of using a baton, rubber bullets, or simply a 2 x 4. I suspect police officer training does deal with that. It deals with subduing a person asap, with out thinking of alternatives.

Although some may say officers should be tried for murder in these cases, and I agree. However, I don't think it will resolve the issue. When these types of issues come up, the officers dont stop to think of repercussions. We need to look at the psychological make up of police officers.

This whole story makes me sick.....and angry. I'm beyond pissed that the actions of this one ass will cloud the good that other officers do. I have 3 relatives in the RCMP and it troubles me that their hard work and dedication is made a mockery by this putz's savage act. In the end it doesn't just degrade them.....we are all degraded by this.

hi Jib...it seems like it was one trigger-happy officer, about twenty others who didn't know what they were doing, and nobody in charge. I realize that it was Friday night in downtown Toronto, the notoriously rowdy "Entertainment District" is not far away, and an average beat cop's nerves might be jangling. They are after all only human. But what happened in and around that streetcar wasn't just a flawed operation, it was a fatal clown show. And any decent police officer knows that. But I'm not after revenge just justice. And what I really want is that something good comes out of this, so it doesn't happen again...

hi wazz...the Toronto police force has been making an effort to diversify its ranks, so it's not the good ol' boy force it once was. But it clearly needs more training on how to behave in crisis situations. And how to defuse a situation rather than escalate it. Because this city already operates at terminal velocity. On a Friday night if you're across the bay on the islands, you can hear it humming like a hive. Everyone is in a hurry and half crazed with stress. So if the police start acting like that, and with the Mayor we have, the whole place could fly off the rails like that train in Spain. And the innocent will die in its wreckage. What I want to know is, were the police on the scene that night properly trained on how to deal with the situation? If not why not? If they were did they forget themselves? Who if anyone was in charge?
And will they please use that all that tape to teach police officers and cadets what NOT to do in a similar situation. Because not only was it tragic, it was so dumb it was PATHETIC...

hi thwap...thanks a lot. I thought I better put in a word for Sammy before the police start dressing him up as Jack the Ripper. From what I could see on that tape the kid was exhibiting all the symptoms of a pychotic/paranoid breakdown. And the fact that the officers on the scene didn't take any time to determine his mental state before they shot him is simply unforgivable. The lack of humanity shocked me to my core, the appalling incompetence left me staring in disbelief. I'm hoping that something good will come out of it. But then, as you know, I'm an optimist... ;)

hi anonymous... what I blame Harper for is playing politics with crime. Disregarding inconvenient facts, whipping up the mob, and replacing justice with revenge. It's the favourite game of every right-wing regime, and if it's not checked it will lead to fascism...

hi e.a.f...as I said in a previous post, what I also find depressing about this case is that it clearly shows how low we have fallen. Once we were known around the world for our superb negotiating skills. Now we can't even talk to a troubled kid having some kind of breakdown before we shoot him like a dog. There are many smart and human ways to deal with situations like that, and in this case it appears that none of them were followed. We need to know why? So it doesn't happen again...

hi Way Way Up...It is a sickening story. But I agree with you, it doesn't just make police officers look bad, it makes us all look bad. I shudder to think of that video playing all over the world, and what they must think of us now.
However, I'm hoping that this will shock people into action, and that better and more human and CANADIAN ways can be found to deal with similar situations in the future. We can't bring Sammy back but we can save other lives...

Yes, most cops are decent and trustworthy, and i shouldn't have generalised so much.
But there seems to have been quite a lot of this type of nastiness coming to light since the advent of the mobile phone camera. And the other thing I find particularly creepy is the steady militarisation of police forces since 9/11. More pronouned in the US, but it is still visible here. Cops dressed as soldiers, tactical units, and so on ... would be damned surprised if all that cosplay didn't eventually work its way into their behaviour and ethos...

It is Toronto, so really who cares.