Stephen Harper: The Madness and the Blindness 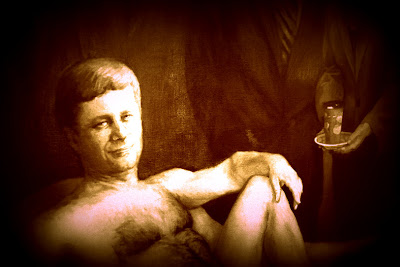 When future generations of young Canadians are forced by their teachers to study the history of Stephen Harper's years in power, the so-called Great Darkness, one question will probably be really difficult to answer.

Because it will exceed their understanding of depravity and insanity.

And it is this one: Why if he was so bad, so mad, such a compulsive liar, and such a ghastly bully, did he fool so many Canadians for so long?

Why did so many in the MSM lie down before him like lambs? Why did they fail to warn Canadians about his inner monster? Why couldn't they bring themselves to call a thug a thug?

Or call Canada a nation "ransacked by barbarians" as George Monbiot does.

“At the moment, this highly cultured, sophisticated, wonderful nation seems to be descending into a thuggish petro-state which appears to be governed by the tar patch, and its politics seem to suffer from the oil curse, as so many countries suffer from when they have found big reserves of fossil fuels.

“It’s almost as if Canada is ripping up its most precious natural assets in exchange for assets which won’t last long and which can only cause harm, and that to me seems to be completely perverse.”

For what better description is there of what this foul Con regime is doing to Canada? Why did it have to come from the pen of a foreigner?

And why are so many Canadians still so indifferent, so passive, or so fatally BLIND?

What is it about the evil of our mad emperor that they still can't see? 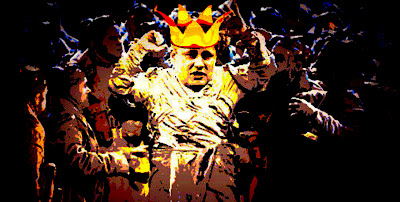 And sadly the answer is that because many older Canadians, including the so-called Boomer generation, have profited from the short-sighted economic policies of the Con regime, they don't see what they don't want to see.

As Frank Graves points out in a long but interesting report, many younger Canadians have blinded themselves, by tuning out.

Our relatively smaller cohort of younger citizens is opting out of democracy and faith in public institutions. A sclerotic gerontocracy is charting a path through the status quo – which shows no signs of arresting the slow slide from the top of the economic heap to middling status.

And this sclerotic gerontocracy has reduced us to a state of paralysis. It's limiting our choices, crippling our ability to prepare for a post-carbon future.

It is also the case that the consensus around the need to move towards a post carbon economy is much stronger in next, younger Canada. Once again we find older, Conservative Canada relatively much more offside on this consensus about need for long term trajectory shift.

They sold us out for the inflated price of a house. They dominate the conversation in the MSM and the blogosphere. They don't even bother to reach out to young Canadians, they only talk to themselves.

They are stuck in the past. They are preventing us from coming up with the new ideas we need to unite and defeat the Cons.

And whenever the young try something new, they howl like wolves, and slap them down brutally... 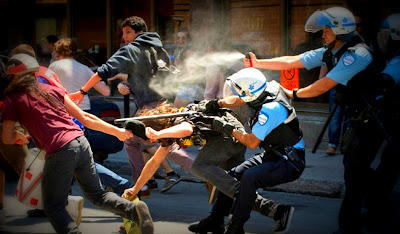 It's a depressing situation, but the good news is that it doesn't have to be that way.

The interests of younger and older Canadians are closely intertwined. One cannot do without the other. And when they work together they are both stronger.

I know that to be true, for I have seen that with my own eyes during the heady days of the Occupy, Idle No More, and Quebec student movements... 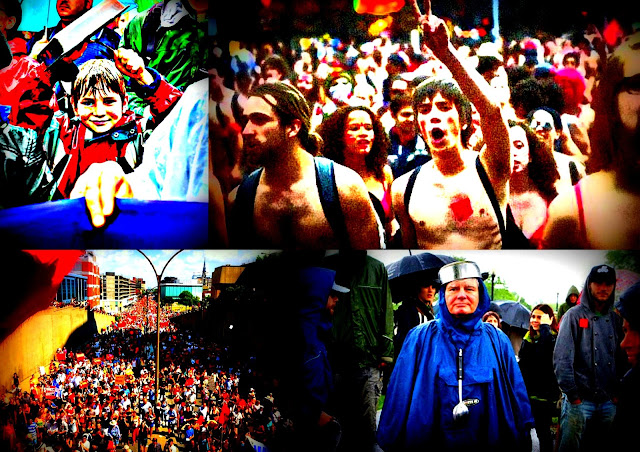 And it was simply AWESOME.

A time when young and old questioned the priorities of our society, new ideas were everywhere, and everything seemed possible.

And if it happened once it can happen again, and I believe it must. Because only a united progressive movement can drive the Cons from power forever, and save this country from the madness of Stephen Harper.

Yup. Let's make this fall a time of renewal. A time of REVOLT.

Let's unite to stop the Cons from ransacking our country further.

For the sake of our beautiful Canada and our threatened Planet.

I think that's unfair to the majority of older Canadians who don't like harper and never voted for him.

Nobody is preventing you from coming up with ideas as to how to get rid of him.

The fact is that "Occupy Toronto" was never serious about getting rid of harper. Nobody is. Nobody articulates anything. Nobody proposes any sort of strategy.

hi Thwap...I don't think I'm being unfair. I do remember vividly the torrent of hate that was aimed at the mostly young idealists of all three movements. I remember one progressive blogger calling the occupy people "rabid animals." It was sickening and disgusting. But I've forgotten all that, and my main concern is how to get younger and older Canadians to work together. I also do have some ideas on how to get rid of Harper and his Cons, and they begin with stopping the splitting of the progressive vote, which in my opinion makes us look like we're too stupid to live. Finally, I'll admit that Occupy and the other movements were not perfect, but at least they showed that we were still alive, which is more than I can say now...

I too am an older person. I have detested Harper since his, Northern Foundation days of 1989. Harper had hired Wolfgang Droege and his Heritage Front as, security for Preston Manning. I would vote for Attila the Hun before, I would ever vote for Harper. Harper does not govern, he dictates. Harper's own team resent being trained Seals.


Some Canadians were calling for, a mental assessment for Harper.
June 7/2012
dogwoodinitiative.org

Harper's bizarre behavior, is noticed by many Canadians. Harper has a huge personality problem with, getting along with people. Even other countries say this. At every meetings of Nations, Harper is the trouble maker every time. Other countries detest Harper's bullying and his hissy fits, when he doesn't get his own way. Other countries don't even want, to trade with Canada anymore.

Hi Simon. Let's play your game.
How about if you got all your young, lazy, whining friends to put down their fucking x-boxes and stop texting for one day, etc. and get the fuck out to vote instead of wandering around in circles beating on tin pots and doing nothing whatsoever constructive? "The Worst. Generation. Ever."
Where the fuck were they when only 33% of Canada went to the polls last time when harper stole his so-called "majority"?
You want to throw stones you better move out of that goddamn glass house you live in first!
I vote NDP. Are you gonna vote for that way so we don't split the progressive vote again?

hi gingersnap...I have always thought that the younger/older combination works so well because the older ones provide experience, and the younger ones provide energy. But you seem to have both. Along with an EXCELLENT record which puts mine to shame.
It's too bad so many Canadians didn't see the truth sooner...

hi anonymous...thanks for adding to the discussion and proving that some older Canadians really hate young people. But "The Worst. Generation. Ever?"
Surely not the one with the most progressive social values in human history?
And an unemployment rate twice the national average. Shame on you.
But yes it's true younger Canadians don't vote in as greater numbers as they should. But they are hardly alone, and if the politicians had aything to offer them I'm sure that number would go up. As it did in the states where marijuana legalization was on the books.
As I said in the post my objective is to get young and old to work together. A lot of constructive things, that continue today, came out of those movements. So they weren't a waste of time. And if you're not aware that the Harper regime is going after young people to cater to the prejudices of people like you, you too must be blind, or worse...

Simon, don't worry about that disgusting old bigot, he doesn't speak for boomers or anybody else. He's no NDPer either. To my ears he sounds more like a Con or a disaffected Liberal. Keep up the good work. :P