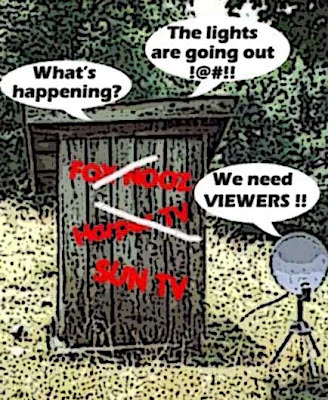 Uh oh. Somebody call a plumber, or a mortician. It looks as if Sun TV News, also known as Fox News North or Harper TV, won't be able to make us pay to keep it on life support.

Sun News Network has been denied a guaranteed spot on basic cable TV packages in a CRTC ruling released today.

But the CRTC suggested Thursday it isn't happy with the status quo and proposed "a new approach" regarding the distribution of Canadian national news services.

Which has Kory Teneycke, Harper's old flak, clinging to hope that his stinky fish might  survive... 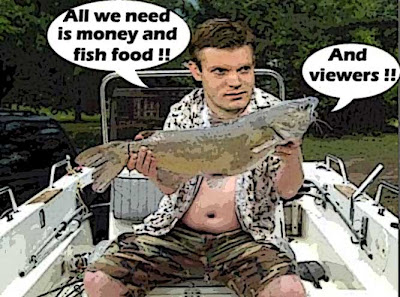 In an interview with CBC News, Kory Teneycke, the vice-president of Sun News Network, said the network was "obviously disappointed" with the ruling but remained "optimistic" about the CRTC's decision to review the current framework.

And has Paul Wells calling it a very lovely defeat.

So the CRTC won’t give Sun News the mandatory carriage that the network has called essential to its survival, but the regulator is clearly sensitive to Sun News’s threats to close up shop if its situation doesn’t change. And the regulator thinks that would be a bad thing — both on its own terms, because Sun News plays “a valuable role,” and because of the signal it might send potential future entrants into the Canadian news field.

Which will no doubt please his partner.

Also: since I’m writing about Sun News, I should disclose to readers that my partner, Lisa Samson, is a registered lobbyist for Quebecor, the station’s corporate parent.

But doesn't impress me. Because what I think every Canadian should be asking is why is the CRTC in such a hurry to shake-up the TV dial? Are they being pressured by the PMO?

When everyone knows  that those who wanted to find Harper TV knew where to find it. But there just weren't enough of them.

And the reason not enough people watched their ghastly programming was because it's not a news channel.

It's a right-wing MONSTROSITY... 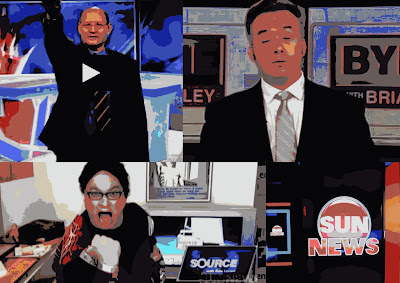 It's cheap, it's vulgar, it's biased, and bigoted.

It's a mouthpiece of the Con regime. 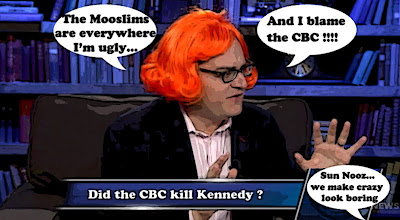 And be horrified by creepy characters like Michael Coren. 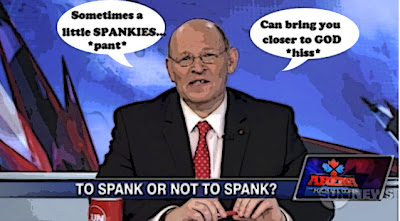 Or stunned by its sheer mediocrity.

And above all so the Con base who want to watch that garbage, can PAY for it. Because I'm NOT.

Like other Canadians held hostage by this corrupt criminal regime, I'm already paying for the ghastly Porky Action Plan ads, and I'm not paying TWICE.

But the good news is it doesn't really matter what the CRTC does. Nothing can save Sun TV News. It's just that BAD.

Kory Teneycke thought he had a brilliant idea. It wasn't. It's a bust. Not even Cons want to watch it, it's so boring. The ratings ended up in the toilet.

And Kory ended up in the ditch... 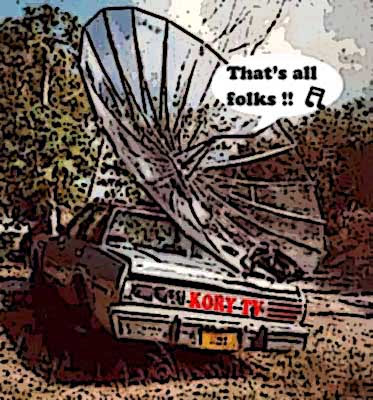 And so now we wait to see how long it will be before Fish Boy gets the hook.

And Fox News North dies a slow and painful death.

More than months I bet. But less than years.

Although I'm not ruling out that it might be able reinvent itself eh?

As a cooking channel.

Or a religious one...

Or that they might be able to last a few more months weeks.

If they sell more of their eighties looking ads like this one....

But one way or the other. Hallelujah !!!!

That freak show is almost over....

The question is, how much time will Pierre Péladeau give Tory to figure out how to steal public funds to finance this horror show? Pierre is already pissing away a couple of million a month into this black hole. Exactly how much more money is Quebecor prepared to lose?

"It's a mouthpiece of the Con regime."

I'm sure Harper will see to it, the Sun gets in. The Sun is Harper's own propaganda machine. I read the Sun's articles once, they were absolutely disgusting in their bias.

As far as Harper and his lies,deceit and corruption. He has pretty much given Canada to China.

The takeover of Nexen by Communist China,
Aug 3/2012
graysinfo.blogspot.com

Much of China's farmland has been poisoned. 40% of China's water is polluted. China will take our food crops, to feed the Chinese. No doubt Canada will be as polluted as China. There will be thousands and thousands of Chinese coming to Canada with Harper's FIPA deal with China. I have very serious doubts, China will leave Canada after 31 years. Most Canadians do not want Communist China on our Canadian soil, what-so-ever.

Not so fast Simon. The fix is in Sun News will get the mandatory carry disguised as a NEWS bundle.

hi anonymous...You must remember that for Pierre Karl Sun TV news was always a vanity project. Kornhole and his Con gang dreamed of creating a Fox News North. But for Peladeau it was about creating a blunt weapon with which bludgeon the CBC. Or more specifically Radio Canada and RDI who are blocking him from having total control of the airwaves in Quebec. So those kind of millionaire games are priceless. However, since Sun TV is only making the CBC seem more valuable, and Pierre Karl has resigned to become the chair of Hydro Quebec, and it is rumoured run for office, his successor may be less sentimental...

hi anonymous...it is a mouthpiece of the Con regime, but since it's reach is so limited, and its on-air product so bush league, even the Cons may decide that with friends like that who needs enemies?

hi Steve...I'm very concerned about the way the CRTC is acting. Maybe I'm wrong,and it's just so they can say: look we gave them every advantage but they still failed don't blame us eh? On the other hand as you suggest, they might try to bundle it with other news programs, so we could end up paying for it. Which needless to say would make me, and about 20 million others, quite upset. And we would make sure the CRTC knew that ...

"Vancouver police say they have now identified several suspects and persons of interest in a long-running scam targeting Chinese seniors whose cultural and superstitious beliefs are being used against them."

Looking at footage of the much-heralded Sun News Alaska "Freedom Cruise", it would appear the propaganda arm of Reform has been running a similar scam targeting seniors in Alberta retirement homes, whose fears, prejudices, "cultural and superstitious beliefs are being used against them" to line the pockets of Quebecor and oil industry lobbyists.

Despite all the right wing conservative hype about Sun News, that's what Peladeau is, a political scam artist who is playing the game from every angle.
In Yahoo media discussions, you have a horde of furious Reformers and Sun News champions of "free enterprise" , denouncing the CRTC, the CBC and particularly its French language service, Radio-Canada, demanding the dissolution of their ideological adversaries.

Here is a typical complaint by an angry Reformer in the Yahoo discussion on the CRTC Sun News ruling:

"I will be e-mailing my democratically elected MP today to ask them to overturn this stupid decision by the CRTC. The CRTC like the rest of the civil service is overrun by leftists who are determined to suppress any point of view other than the left-wing point of view. Sun TV is not allowed to compete on a level playing field while Canadians are taxed to pay for the ridiculous CBC and its endless leftist propaganda?? How can this be tolerated?? To make matters worse, the CBC's French-language arm, Societe Radio-Canada is not only leftist but consistently supportive of the Quebec separatist movement, something that most English-Canadians don't realize.... Can someone show me the logic in forcing Canadian taxpayers to subsidize a separatist movement that is determined to destroy the Canadian federation?...."

To which I responded:
"As far as that goes, most Reformers are quite vocal on media discussion blogs such as Yahoo and apparently quite "determined to destroy the Canadian federation" every time the issue of Quebec is raised. And why are these same Reformers going around begging for handouts and special consideration for Peladeau's Quebecor media empire? As far as "separatist" affinities goes, Peladeau who still sits on the board of Quebecor was recently appointed chairman of the board of directors of Hydro Quebec by the Marois PQ government "...

The Reform allegations pertaining to the "separatist" propaganda efforts of Radio-Canada are of course nonsense. But even were such complaints to be founded, it would be utmost hypocrisy for Reformers to complain of such activity when they themselves, every day in every conceivable media forum spew their hatred towards Quebec in the vilest possible manner and call for Quebec to be driven out of Canada. You would think if such allegations were founded that our Reform bigots would be calling for greater budget allocations to Radio-Canada in order to achieve their desired objective.

As for Quebecor, the shareholders of this corporation are businessmen, not Reform ideologues, and are coming to the realization that Peladeau seriously miscaculated in his belief on the mass popularity of a media network promoting Conservative "values", fear, hatred, and bigotry in English Canada. The market simply isn't there for such a product to survive without state assistance and investors are beating a retreat from Ezra Levant's pathetic comedy club network . Peladeau himself, the alleged champion of Conservative "free enterprise" is pursuing other interests centered apparently on publicly owned Hydro Quebec. As to Peladeau's political affinities with Reform, given that there was likely a wealth of qualified applicants for the position of chairman of the board of Hydro-Quebec from within their own ranks, it is unlikely the Marois government would have appointed the role to someone they deemed an ideological adversary.....

With such an array of bigots and crackpots out there, I'm surprised Peladeau has not added Howard Galganov to his Sun News roster as Galganov's views jive with the most reactionary, bigoted, depraved counterrevolutionary vanguard of Reform. You all recall Galganov who addressed mass rallies of angry Reformers in the wake of the last Quebec referendum, at the time the darling of the English Canadian media, advocating civil war, armed state intervention and the partition of Quebec. His program now has broadened to advocacy of civil war in the US and the secession of "Conservative" Southern states, as expounded in a recent article "Obama Is Pushing The Envelope For Civil War".

He also baldly asserts, with no apparent rational justification for such assertion, that Obama has become "Israel’s number one NIGHTMARE".


As for his views on ethnic and race relations, as expounded in a piece on the Zimmerman trial:

"Not only is the Black community its own worst enemy, they are aided and abetted by the LEFT, to the point that all of their enormous failings are blamed on the White community, INCLUDING a young Black Guy who decided to punch out . . . in his own words 'A CREEPY-ASS CRACKER.'”

"If you lived in an area where there were skulking young BLACK people wearing HOODS, walking around your community in the darkness of a drizzling night, you would beg for an ARMED George Zimmerman willing to keep you safe."

He has moved on to bigger game than Quebec separatists in his military interventionist schemes although he does dabble in advocacy and campaigns against French language rights in eastern Ontario, where he has since established himself. All in all a worthy addition to the Sun News propaganda roster....