Remembering Jack Layton and the Man on the Bike 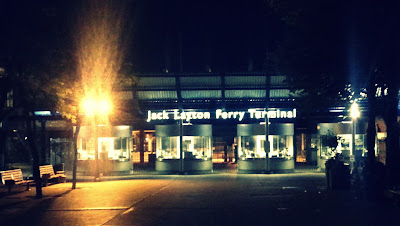 At the end of a long day, it's always a welcome sight. The little terminal to the Toronto Islands, and in the summer my escape hatch out of the city. But its new name makes it look even better.

Because Jack Layton loved the islands as much as I do. I'd see him there all the time riding a bicycle with Olivia Chow. And of course because like so many others, I loved Jack.

So today on the second anniversary of his death, I thought this was really neat.

A statue memorializing Jack Layton was unveiled Thursday, a life-size bronze sculpture depicting the former federal NDP leader riding a tandem bike and wearing a broad smile as he rolls along the city's lakeshore. 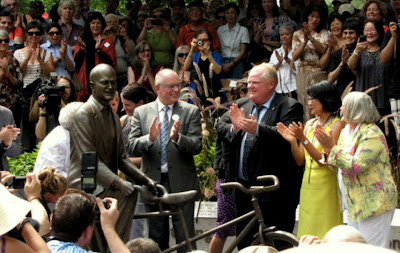 And beyond the sadness of the anniversary, what struck me was how today's event brought together even some of the fiercest of political enemies. Like Rob Ford, who came up with the idea to rename the terminal, and Sid Ryan, whose Ontario Federation of Labour donated the statue.

Standing there side by side, to pay tribute to Layton. Can you believe that eh?

But then Jack always had the ability to bring people together. To bring out the best in them, to make people laugh. It was hard to hate him.

And he was loved by many... 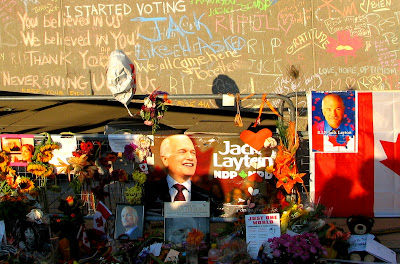 His death at the height of his popularity, was a cruel blow, a very sad thing.

I'll never forget how moved I was by the sight of Toronto City Hall turned into a giant chalk memorial... 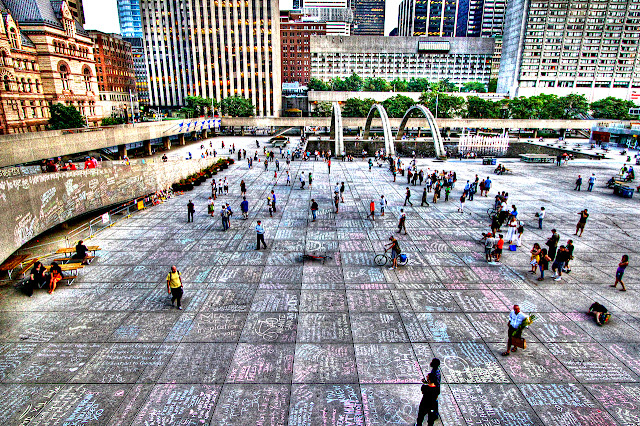 Or how inspired I was by his last words. 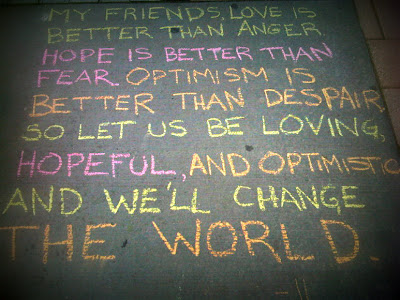 By the time I went by there this evening the large crowd that was there earlier had departed.

So I was able to stand there and stare at the statue for a while, and decide what I thought of it... 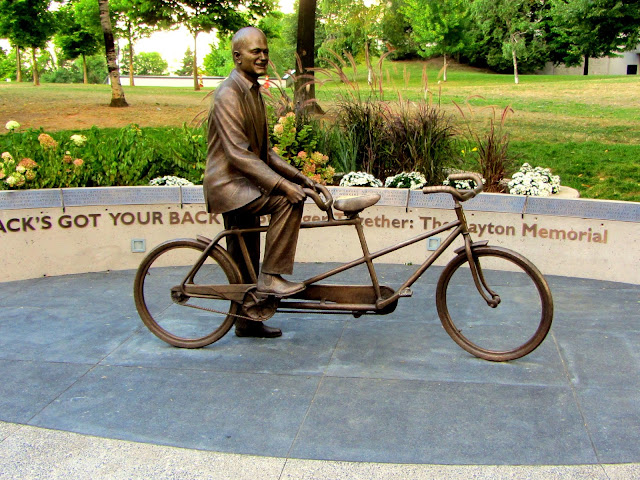 And although it reminded me of the journey we didn't get to take together. The one that was so suddenly and sadly interrupted. When I STILL couldn't help smiling I knew it was a good one eh?

And when I jumped on the front seat I liked it even better. Because it's fun, it's Jack, he's inviting you to get involved, and he'll always be coming home from the islands he loved.

Although I do wonder what future generations will make of it? What will parents tell their children on their way to the ferry?

And I guess it will be something like this:

He was a famous politician who never became REALLY famous, like a Prime Minister, because he died too soon. But he fought for all the right issues. For the powerless and the poor people. And he was greatly loved by many Canadians.

He was a good man, he was Jack, the Happy Warrior.

And now for the ages, the man on the bike... 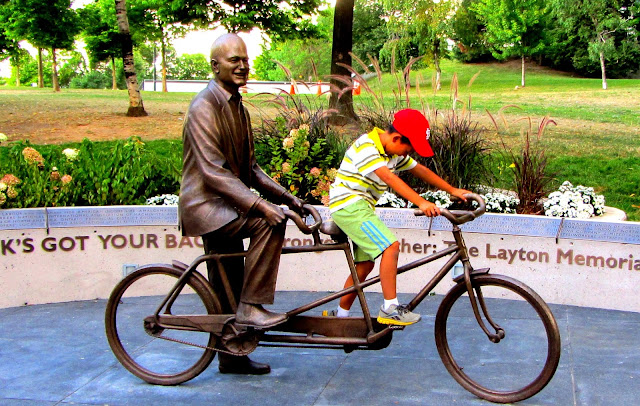 It is also very funny to see Rob Ford applauding a statue of a bicycle.

I like Jack, but he gambled and lost when he brought down the Martin Government, and Canada has been paying the bill ever since.

How I miss our Mr. Canada, Jack Layton. Canada would have been a much different country, with Jack still here. I still can't think about Jack, without a tear in my eyes. Jack and Olivia cared so very much about their people. They were such a wonderful couple. Olivia is really liked by her constituents. Olivia is a wonderful person. Jack was a wonderful man too,

Steve, is this really the time and place for phony Liberal talking points? If Layton and the NDP had voted with the Martin Liberals the government would still have fallen (by two votes). One can easily guess the Tory campaign narrative, tying the NDP to the Sponsorship Scandal.

Even so, Layton offered to support the Liberals in exchange for enhanced Medicare finding. Martin turned him down.

You can go ahead and support Canada's other conservative party. I choose to support a party that actually believes the things that Liberals like you only pretend to support.

Jack did not bring the Martin govt. The total number of NDP and Lib voting members combined would have been less than the total number of Cons, Bloc & 2 independents combined.
Canadians were horrified that the liberals took public money for their own use - adscam and had enough of liberals. Liberals defeated themselves by being corrupt.
Considering that Martin had promised to call an election in 6 wks anyhow, all that happen is that it came 6 wks sooner. Let's stick with the facts Steve.

Steve's talking point from Liberal Party headquarters that Layton is to blame for the Harper government is tired and not based in reality. The Liberals had plenty of opportunities to prevent a Harper majority government, but they offered the voters crappy leaders, crappy candidates and crappy campaigns.

Due to their similar policies, the Liberals kept propping up the Conservative minority until Ignatief gambled at the wrong time and lost. The Conservatives cheated in the election too, so their majority is illegitimate anyway. None of that can be pinned on the NDP.

Im with you Steve....I cannot look at them without thinking the same thing....in fact Olivia is still repeating the same old lies about the wonderful Paul Martin. The scandal blamed on the liberals was the work of backroom conservative operatives like Guite'....I voted for Jacks party in the last election because I could not believe the arrogance of Mr.Ignatieff in talking down to him but it was a BIG MISTAKE....I will vote LIBERAL next time although I have never had a puff and I could sure use one when I hear the"HOLIER THAN THOU' NDP members...what a pile of hogwash.

hi lagatta...I suppose it was funny, although when I think of Ford and I think of bicycles, the smile turns into a frown. I give him full credit for coming up with the idea of renaming the Ferry terminal, but when it comes to what he has done to make biking safer in the city he gets absolutely none...

hi Steve...Layton was not perfect and as partisan as all the other progressives, in our divided left But as I wrote in my post, he had a lot of admirable qualities, and whatever one thinks of the decisions he made, he was still a very nice guy...

hi anonymous...when I first saw the statue I have to admit I was struck by how quickly time passes, and saddened to think how Jack is fading into history. Especially since I live in Olivia's riding, and used to see the two of them together all the time. And you're right they were such a great couple, which is why when all is said and done it's such a sad story. I too wonder what might have been, but I know the kind of Canada he wanted, and I'm doing my best to try to make it happen...

hi everyone...I'm staying out of all of the above, because the post was really just about Jack the man, and how much I miss seeing him pedalling through my neighbourhood.
I also believe in uniting the left by whatever meaans necessary, so as to make sure we get rid of the Cons. I've got a lot of ideas about the kind of things I'd like a progressive government to do, but until the Harperites are defeated they will just just remain dreams...

I LOVE JACK LAYTON and also stephen harper so peace out people! he was a good person