The Scary Tale of Stephen Harper and Mr Chainsaw 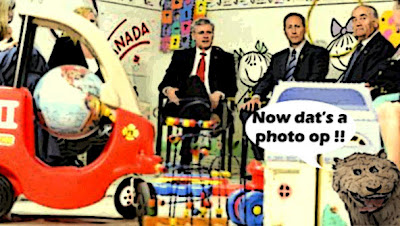 Even by the standards of the Con propaganda machine it was a bizarre photo-op. Stephen Harper, Peter MacKay, and Julie Fantino in a room full of toys, in a community centre in Toronto.

Just so Harper could play Mr Cuddly and Great Law and Order Leader at the same time.

And solemnly declare that he is determined to protect the children of this country from child predators AND Justin Trudeau.

Harper repeated his earlier criticism of Trudeau, saying the Liberal leader "displayed poor judgment" with his marijuana use. "I look at the contrast with him promoting marijuana use for our children versus saying yesterday he will have no economic policy for several years," Harper said.

Even though Trudeau's proposal would control the drug, and help keep it out of the hands of younger Canadians. While Harper would have kids associate with organized crime, and then jail them for no good reason.

Because you know, unlike Justin, Steve has good judgement.

Even though his economic policies are leading this country to financial disaster.

And he's about to scare the bejeesus out of kiddies and adults alike.

By morphing from Mr Cuddly into Mr Chainsaw.... 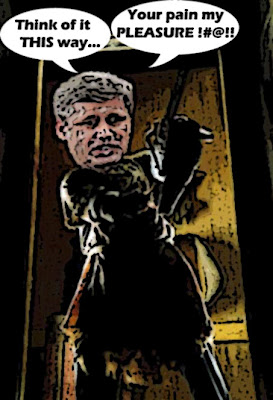 The maniac who is so determined to slay the deficit before the next election, so he can bribe voters with tax cuts, he would threaten our already weak economy.

The government, however, has little room to manoeuvre if it is determined to wipe out the deficit in two years. The revenues needed to balance the books are being squeezed by the flat economy and Flaherty’s tax cuts, particularly the Goods and Services Tax reductions that deprive Ottawa of $14 billion a year.

And the 2015 deadline for balancing Ottawa’s books is crucial, because Harper has promised several popular tax breaks once the deficit is zapped. He is unlikely to want to face voters without being able to fulfill those pledges.

The incompetent Con klown who after mutilating his own government with those tax cuts, is now planning to find the money he needs by killing more good jobs, slashing services to the poor and the elderly, going after the CBC, Via Rail, and medicare.

And even uprooting plants in government offices !!!!! 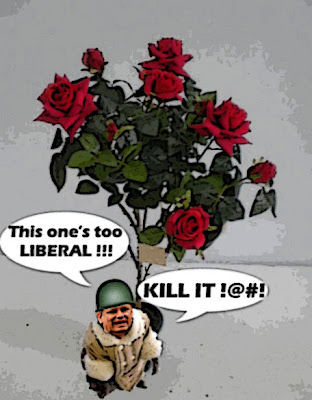 In what could be the latest resource sell-off, the federal government has plucked hundreds of tropical plants from bureaucrats’ offices in Ottawa and Gatineau and is offering them to the highest bidders through its gcsurplus.ca website.

Can you believe that eh? It would be hilarious if it wasn't so pathetic. And so many real economists weren't urgently recommending that our economy be watered or stimulated, not STRANGLED.

But then that's Boss Harper. Always putting his sleazy interests before the interests of Canada. Dumber, meaner, and now even more desperate.

Because now this is a real NIGHTMARE... 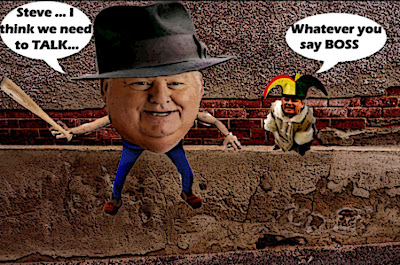 Old Duff has gone rogue and is threatening to kneecap him !!!!

If the Harperites expected Mr. Duffy to martyr himself — so that, in Frank Underwood’s words, all they had to do is “sharpen the blade, hold it at just the right angle and then 3-2-1…” — they have seriously miscalculated. Mr. Duffy is using three decades of experience on Parliament Hill to bewitch, besmirch and bewilder.

The suggestion is that the course of events recalled by Mr. Duffy do not tally with the version put on the public record by the Prime Minister — a tantalizing prospect that would surely have repercussions on Mr. Harper’s grip on power were he to add to, or change, his story under oath.

And if this mob vendetta gets any uglier, as I expect it will, and the economy starts sleeping with the fishes.

All the photo-ops in the world won't save Great Broken Leader... 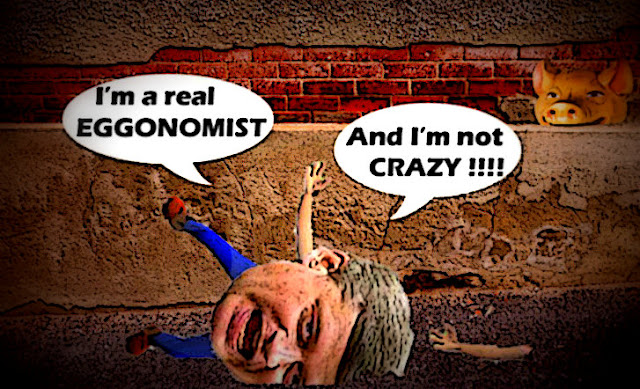 But remember this, before he comes crashing to the ground he has the capacity to do enormous damage to this country. More than he has ever done before.

So we must be prepared to fight him harder than we ever have.

Oh yeah, and since it's Friday, don't worry about the other Cons eh?

If the police don't get them first.

Their turn will come...

I don't know about that. As we all know, Harper controls everything in this country.

I just read on National Post? A judge said, Sona may not have to go to court for his robo-call fraud. And, Harper is working secretly on the TPP Trade Group. Harper also signed a deal with, the Communist China Army. Harper has been selling our farmland to Communist China.

It doesn't matter how criminal Harper is, nothing is ever done about, Harper's lies, deceit, corruption, dirty tactics and thefts. We would have to have an, armed rebellion, to run Harper out of Canada.

hi anonymous...don't worry we won't need an armed rebellion, because we are more than they are. All we have to do is organize, unite, and work harder than we ever have. And we can chase the Cons from power at the point of a ballot...