Is Stephen Harper Preparing to Abolish the Senate? 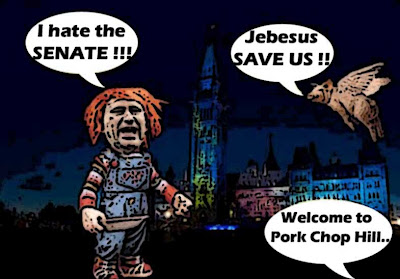 I don't know if it's constitutionally possible, but if anything can bring down the Senate it just might be this audit.

The Senate's internal economy committee has accepted a plan by the federal auditor general to review all senators' expenses, including travel and office expenses, CBC News has learned. Sources have told CBC News that senators will be required to co-operate.

Because the way things are going who knows what porky stuff it might uncover? And since it might take over a year for the results to be known. Which would bring it into the gravitational pull of the next election.

It really makes me wonder whether Stephen Harper might end up campaigning to ABOLISH the Senate rather than reform it.

Because as Bruce Anderson points out the Senate scandal has been poison for the Cons. It's always better to turn a posse into a parade.

In watching the work of the Conservatives on the Senate issue I can’t help but be reminded of what one of my first clients told me, many years ago, was the greatest communications advice he ever heard. This grizzled veteran of many public relations scraps told me, more or less, “when a posse is forming to run you out of town, the only thing to do is to get in front of it, hoist a baton, and make like it’s a parade you are leading.”

And as we know Harper is capable of ANYTHING. 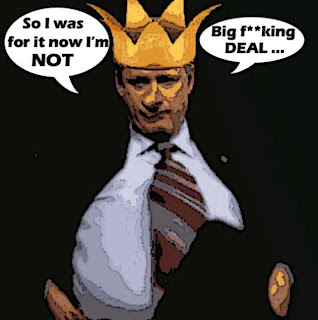 In the short term, the Harper communications machine will continue to drive the bulldozer — back and forth — over the Duffy and Wallin corpses. But in the longer term, there is every sign that Harper is prepared to leap past the Senate reform marker and go straight for abolition.

Last month, Pierre Poilievre, minister of state for democratic reform, said the government would prefer reform , not abolition, but if it cannot be reformed, it must be abolished. The government has asked the Supreme Court to advise on how abolition can be accomplished.

It would be a stunningly cynical move. But it would take some of the air out of the sails of Tom Mulcair and the NDP who have been championing the abolition of the Senate. And above all it could damage Justin Trudeau.

It would aim to take the issue away from the NDP and its “roll up the red carpet’’ campaign and could undercut Justin Trudeau’s reform message, allowing the Liberal leader to be painted as the Senate status quo leader.

Which is as we know is Great Ugly Leader's main obsession in life... 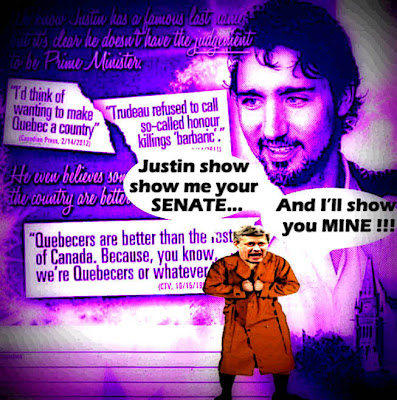 I mention all of this because I have seen quite a few progressives defending the Senate. And my advice to them is DON'T.

Because I know Great Ugly Leader all too well, and I know you can't trust him as far as you can spit.

So make sure that his escape hatch is as small as possible. Keep hammering home the message that he wasn't the one who tried to reform it. He was the one who CORRUPTED it beyond repair.

Make sure that if he suddenly turns on it, we are not caught by surprise.

And that if it does go down.

He is the only one who goes down with it... 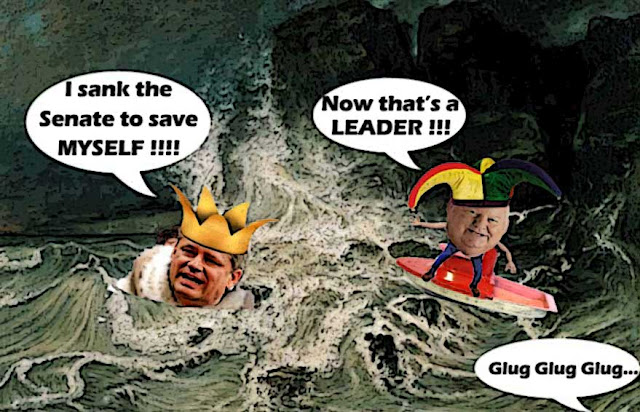 You are quite correct that Harper is quite capable of abrupt policy changes, throughout the 90's and into the new millennium, Reformers were quite vocal in Parliament in their opposition to immigration and multiculturalism, which they linked to crime, up to the point Harper's legion of bigots boosted him to power, and he maneuvered a political flip, discovered the electoral potential of the immigrant and ethnic vote and immediately reversed direction, embracing expanded immigration subservient to corporate criteria and multiculturalism as Conservative values.
In the period leading up to the 2008 election, Harper toyed with the idea of constitutional reform with respect to Quebec, seeking to win a provincial base within the ranks of the ADQ's right-wing "autonomists", which today finds expression in the CAQ, but discovered the electoral appeal of Quebec-bashing in English Canada mobilizing and spurring on his legions of Quebec-haters in media discussion blogs, performed a political flip and abandoned his ADQ allies, an anglo-chauvinist perspective demonizing Quebec which he pursues to date.

On the Senate, Reform embraced an electoral reform perspective when they backed the provincial senate election campaign of bigoted unworthies such as Bert Brown in Alberta, but such excitement fizzled and never extended beyond the borders of Alberta. Such dreams have long since been abandoned. Now that Harper has perverted and corrupted the Senate for his own partisan, criminal objectives, and given mass anger, contempt and condemnation for such a wretched institution to which it has been reduced by Harper, Harper may well perform another political about-face, sacrifice his former minions and campaign on their corpses, seeking to channel popular anger to his own ends.
Undoubtedly, he will attempt to combine the themes of Senate corruption with that of Quebec and the Quebec-based Liberal and NDP parties, suggesting perhaps that Quebec is the root of all crime, fraud and corruption which plagues Canada .....