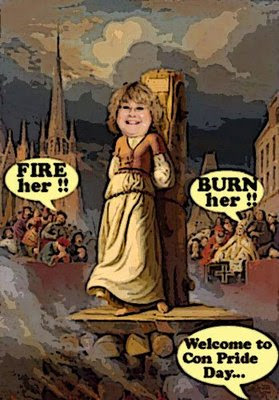 Remember how the Cons punished Diane Ablonczy for the crime of contributing cash to the Gay Pride Parade?

And how they claimed that she wasn't being burned for doing that,and that they weren't trying to appease their rabid religious base......just REVIEWING the program.

Well it seems they were lying Again.

Darren Cunningham, Clement’s spokesman, said at the time that the program was simply entering a second phase that would be managed by the senior minister.But documents obtained by The Canadian Press under Access to Information legislation raise questions about that line.

“This is to formally advise Minister Clement has revoked delegation of authority for the Marquee festivals program,” Clement’s chief of staff, Bill King, wrote to senior bureaucrats on June 29.

“All files, projects, correspondence and communications are now to be managed, approved and signed off by Minister Clement instead of Minister Ablonczy.”

And as Kady O'Malley points out.

June 29th was, of course, exactly one week after McVety issued his clarion call to supporters. Just five days later,PMO sent out a caucus-wide ‘Info Alert’ in response to what it somewhat described as an “increasing number of constituent communications related to the Marquee Tourism Events Program,” and noted that the program was now being handled by Clement, who would be reviewing “the entire program” to ensure that it was providing “genuine stimulus to the economy.”

Which makes it pretty clear in my mind that what we're dealing with here are a pack of sinister homophobes trying to appease people like the ridiculous Christianist Charles McVety and their bigot base.

And makes what Harper said about his God telling him what to do particularly ominous.

But then what do we expect when Darrell Reid, the former President of Focus on the Family Canada, is Harper's Deputy Chief of Staff ? Paul Wilson, another Christianist is the Director of Policy. And the PMO is crawling with all kinds of other theocons.

In his recent secretly taped speech Stephen Harper revealed his contempt for gays and women by calling them "left-wing fringe groups." This latest revelation shows how much these Cons HATE us.

So how much more will it take before the MSM starts asking some questions about the infiltration of our government by U.S.-style religious fanatics?

I realize that people are reluctant or scared to get involved with the religion of others. But when politics is religion and religion is politics and it dictates government policy we have a real problem.

So maybe we could just start with these BURNING questions.

Who is the real Stephen Harper?

And who is REALLY running Canada? 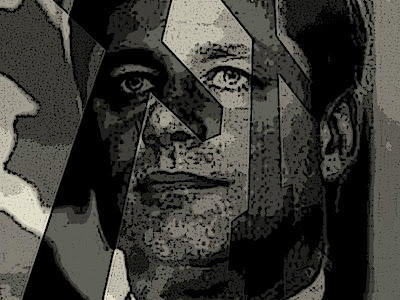 I swear go gawd Harper's personality disorder is contagious to the entire caucus. Like most narcissists Harper is stealthy but totally unfit to govern this great country. But then again, neither is Iggy who seems to be the other side of the same coin.

Harper and his propaganda team work hard to obfuscate his obvious meglomania; he must be exposed so rational people can finally see it. Surely someone could goad him during QP, press his buttons, or does he really possess that much self control?

I've been trying to figure out how anyone is going to touch this third rail -- hitting the "Christians", and the only way this is going to work is if there is a real paper trail to show, that one particular "lobby group" is receiving under influence in exchange for something else. It has to be approached from a corrupt lobbying pov or else it makes whoever picks up the challenge look like a big bad Roman....

Hi Toe...yes from what I understand the whole Con caucus is terrified of him.
And he of course has gone on record telling people he likes to see fear in the eyes of his subordinates so the place is a mad house.
I wish the media would have the courage to ask some hard questions about what is going on in the PMO, but I'm not holding my breath.
So I guess it will be up to us to try to goad him into doing or saying something crazy. And I must say I'm looking forward to it... ;)

hi anonymous...you're absolutely right. The MSM are absolutely terrified of being branded as anti-religious. But at the very least they could shine a light into the PMO, tell us a little more about who these theocons are, and let Canadians draw their own conclusions.
But as I just told Toe I'm not optimistic...