Afghanistan and our Broken Army 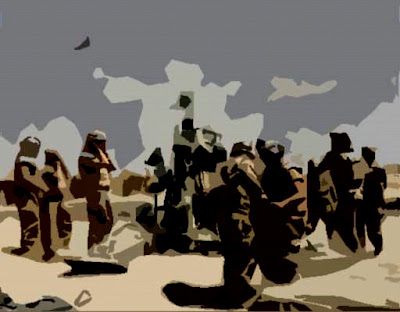 I see that Michael Ignatieff says that we are lost in Afghanistan, and that he intends to make it clear to Obama that Canadian troops will be pulled out in 2011.

"We are searching for a good strategy in Afghanistan. To be frank, we are currently lost in Afghanistan. I support the mission, but I think we are lost right now. We need to find a new strategy and I think Canada can offer a legitimate contribution."

Which is jolly decent of him...hip hip hurrah. Considering that our mission in Afghanistan has been lost for YEARS. And if it wasn't for him...and other right-wing Liberals... our troops would have been back this month. Instead of fighting a lost war we cannot win...... for two more bloody years.

With a busted army that when it finally returns won't be able to do ANYTHING.

Canada's army is being pushed to the limit by the strains of keeping a 2,700-strong military mission in Afghanistan and the force will need at least a year to recover once the troops return on schedule in 2011, the top army commander said on Monday.

Leslie said men and equipment in Afghanistan were wearing out fast and likened his job to juggling a chain saw.

So that's how Canada's Great War on Terror is going to end...not with a bang but a bloody whimper. The sickening sound of a chain saw. And of course.... the bagpipes over and over again.

We charged into a war we weren't properly prepared to fight. We wandered around in a fog for years. Many brave soldiers died. Before the enemy and too many tours took their toll. 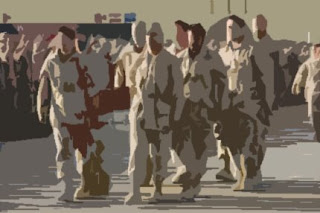 And we limped out of Afghanistan like Napoleon out of Moscow. Not because we wanted to, but because we HAD to.

With a BROKEN army.

Oh boy.You know what the worse thing is? Apart from the dead, and the injured, and the shattered idealism.

We should have seen it coming YEARS ago.

And when this bloody debacle is over, we're going to spend the next FIFTY years trying to understand why we didn't. Michael Ignatieff will write another sort of mea culpa like he did about his support for the war in Iraq.

And nobody will ever be able to explain to their loved ones.

Why all those soldiers died for NOTHING...
Posted by Simon at 9:06 PM

Should have posted that great photo of Harper strolling across the common's floor and shaking Iggy's hand - kindred spirits - priceless!

an optimist with imagination attributes to people a degree of unsubstantiated credit and an odd willingness to bear responsibility.

sorry dood, in fifteen years, twenty at the most, they won't give a fuck. they'll willingly do it all over again. don't believe it? look southward.

Ignatieff is an asshole. Like Jan said, that moment when he and Harper shook hands after the vote to extend the mission is etched forever in my mind. He thinks his weasel words will convince me of another "mea culpa"? F*ck that.

Our participation in Afghanistan is a huge blight on our international reputation. The fact that we have contributed to so much loss of life and maiming in disgraceful.

Hi Jan....I don't know why but I'm starting to get the feeling you don't like Iggy... ;)
But yeah all those who helped put wind in the sails of this doomed mission need to explain themselves.
Because they shoulda seen it coming...

Hi Unokhan...are you calling me an OPTIMIST? How dare you ;)
But yeah maybe I am a bit naive assuming that some people are capable of bearing responsibility.
I used to think that the U.S. had finally learned its lesson in Iraq. But now they're making it sound like a victory.So they are going to have to learn it all over again in Afghanistan...

Hi Beijing...hey what is this? the anti-Ignatieff fan club? :)
I'm more pragmatic than you...an unprincipled idealist you might say. Whoever can bring down Stephen Harper has my blessing.
As for Afghanistan I agree with you...this doomed mission has gone nowhere, while damaging our ability to be peacekeepers. Which is something I was proud of and should be Canada's proper role in the world...