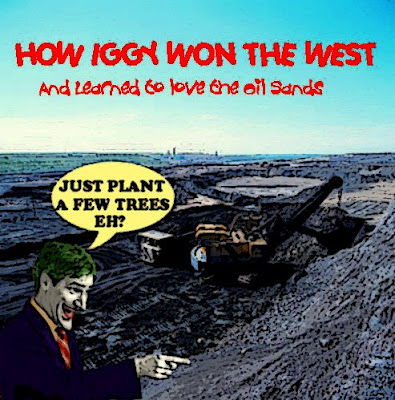 Well by now we all know how Michael Ignatieff set off to woo the West and ended up loving the Dirty Oil Sands.

"National Geographic is not going to teach me any lessons about the oilsands," he said.

"This is a huge industry. It employs Canadians from coast to coast. We have oil reserves that are going to last for the whole of the 21st century. We are where we are. We've got to clean it up, and we've got make it a sustainable place to work and live."

But somehow forgot to mention how we might do that. Which is hardly surprising because the only way to clean up that big black ugly hole that is torching the planet is to fill it in, cover it with manure, and hope that a thousand years of evolution will bring it back to life.

Because not only is carbon sequestration a monstrous fraud.

The ministerial briefing notes, initially marked "Secret," say that just a small percentage of the carbon dioxide released in mining the sands and producing fuel from them can be captured.

It could also be DANGEROUS.

Huge quantities of carbon dioxide stored underground or inside a mountain could suddenly leak out and smother entire communities. And if you don't believe that, just ask the people of Lake Nyos.

Look I know that Iggy is determined to waste his time trying to woo the West, but on the question of the oilsands he is either a liar or a dangerous idiot...who needs all the lessons he can get from National Geographic.

But definitely NOT a leader. just another Oil Pimp.

Interestingly enough that video was made by the Coen brothers. Trust them to see the horror ....and the comic potential.

Too bad Iggy doesn't see it that way. But what do you expect eh?

The oil sands are a real horror story.

Oh Simon, I know I shouldn't go on like this: but.... this is another another FABULOUS post!

There are powerful interests involved here so we are going to be dealing with some strong emotions on both sides. The oil sands has been a buzz phrase in the investment community for a while now so it should be interesting to see how this shakes out.

One would be wise to see Rex Murphy's piece on the tar sands at the CBC National news page.

I sent a letter to his Constituency office , telling him what I thought on the entire fiasco. I was very disappointed in him.

Ooh! Can I steal your graphic? With credit, of course. And that Clean Coal ad is the best one I've seen so far.

It distresses me that both Ignatieff and Obama can be so blind to the horrors represented by the tar sands projects and mountaintop removal coal mining respectively. Of course they don't strike me as being real "outdoors guys", so maybe that's it.

Personally, I don't think you should be allowed to be Prime Minister unless you know how to have sex in a canoe.

Is this part of being sure the whole country has no doubt that Dion is no longer Liberal leader?

The clean coal video is priceless. Thank you Simon.

Hi Oemissions...that's OK I don't mind at all... ;) Seriously though thanks for the encouragement.I appreciate it. I'm lucky to have some great readers who stick with me through the odd decent post and the many...um...other ones.
I just HAD to say something about Iggy and the oilsands. I realize they are a fact of life...but they should not be celebrated because they really are an ugly dirty hole that you can see from outer space...and they really are helping to torch our beautiful planet...

Hi Ryan...you're right there are mighty interests involved...especially during a time of recession and peak oil. The very least I'm asking for is that they dramatically slow the rate of development before they turn northern Alberta into a moonscape, and make any effort to reduce emissions practically impossible.
But I'm afraid I'm not optimistic....

Hi Torontonian...hey I thought you were my friend. How could you make me read what that right-wing dwarf has to say... I'm practically TRAUMATIZED....
It's certainly true that we have become dependent on oil for so many things. But sooner or later we're going to have change. And just resigning ourselves to do nothing as Rexy seems to suggest...when he isn't going on about how global warming is a myth, or Britney Spears' bikini.
Gawd I was at the supermarket the other day...and I practically stepped on him. One little accidental bump and I would have sent him flying into a pile of sausages. Now wouldn't that have been EXCELLENT? :)

Hi Cari....good for you. I know he's trying to reach out to the West and that's certainly a good thing. But that's not the way to do it. This faux outrage against National Geographic was ridiculous, when in fact the piece was quite balanced. But the pictures tell the story. It's an ecological nightmare and it's got to be stopped or brought under control....

Hi Jennifer...of course you can have the graphic...since you're excellent and thorough post gave me the idea in the first place. I knew that carbon sequestration is just another straw these oil boosters are clinging to, but I didn't realize that there was a Canadian study. So thank you :)
I think the problems all politicians have right now is that we're all too busy defending the present from the recession...and nobody is caring enough about the future. But of course it will catch up with us...it always does...

Hi Scott...well it certainly is a U-turn. From talking about a carbon tax and a greener future to writing an Ode to the Oilsands.
I can only hope that it's only pandering to Alberta...and not a sign of a more serious infatuation. Because another oil pimp in Ottawa is the LAST thing we need...