Stephen Harper and the Plains of Abraham 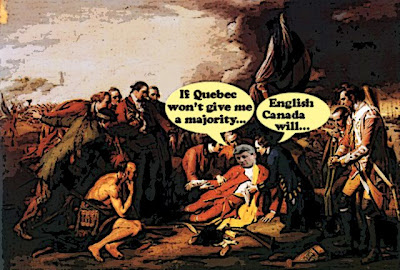 I see that Great , , Fallen Leader has thrown his pudgy body into the Great Plains of Abraham controversy.

Prime Minister Stephen Harper is calling on Quebec sovereigntists to stop trying to stir up a political war over the re-enactment of the historic Battle of the Plains of Abraham this summer in Quebec City.

"It is only for the Bloc that it is a current battle that continues because the Bloc is a party that wants to divide the people of Canada. Our government and the vast majority of Canadians and Quebecers want to continue to live in a united country."

But the headline on this story is wrong. He is not trying to quell the controversy, he's trying to pour gasoline on it. By blaming the sovereigntists when in fact many federalist Quebecers don't like the idea of a re-enactment either.

So why would he do such an irresponsible thing? So he can whip up anti-Quebec feeling in English Canada, like he did during the Coalition times, and hope it will give him the majority he craves so much. Because he's that evil. Because he's THAT crazy.

When we could turn the event into a celebration of friendship, and party together on the Plains like Sébastien and I used to do... 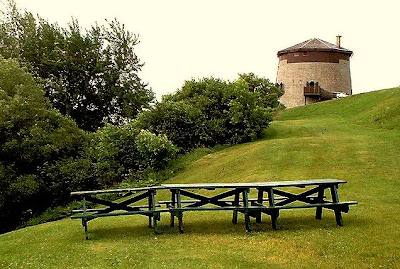 When we were dating we would meet almost every weekend in Quebec City. And on sleepy summer afternoons we would picnic on the Plains, or just lie side by side soaking up the rays and the cool breeze from the mighty St Lawrence river moving by below.

And then if I looked at Sébastien I could see the face of the Great French Nation very much alive, beautiful and proud. And if he looked at me he'd see a Scottish-born descendant of one of the Highland Frasers who fought the French that day. With stars in his eyes.

Only in Canada eh?

Which is why I say scrap this stupid re-enactment. Defeat the monster Harper who would divide and destroy our beautiful country. And if there's a big friendship party on the Plains this summer.

Question Simon..did the Liberals ever celebrate this? I don't think it is proper.

I have no idea what Harper's motivations were (undoubtedly evil), but I think you're missing the point of events like this. Reenactors and history buffs don't 'celebrate' such battles so much as they recognize and honour them as significant historical events that shaped our nation.

Personal story: I managed to make my way to the Saratoga Battlefield National Park in New York for the 225th anniversary of the Battle of Freeman's Farm. My ancestor was John Freeman. The battle was fought on his farm, and his house served as the headquarters for Gen. Burgoyne and the British.

There was very little going on that day, aside from a very friendly costumed docent telling the story to a dozen or so tourists. Most of the festivities were reserved for the 2nd Battle of Saratoga a few weeks later, which the Americans won handily. Freeman's Farm was pretty much a draw, but none of that mattered to me. It was still an incredibly moving experience, walking those fields where my ancestor lived and fought, where so many died - on both sides - and still lie unmarked under the grass where John Freeman once grew his crops.

My point is, it made no difference to me that this battle represented a pivotal defeat for the British and more than one of my Loyalist ancestors. And it shouldn't matter to the descendants of the French or English who 'won' the Battle of the Plains of Abraham. Nobody really wins or loses a war - they can only survive. All we can hope for is to learn a few lessons from history, and honour the dead in the meantime. We can only do that by learning and understanding.

BTW, John Freeman survived, only to die of smallpox along with most of his family as refugees in Quebec three months later. And yet, I don't blame the American Rebels. Much.

You're right about the stupidity of Harper in fanning the flames here. He is desperately trying to divide and conquer, and laying it thick on the BQ (which to most Quebeckers, is just thinly-veiled Quebec-bashing) plays to his base.

But the world economic situation is such a dismal mess that he is essentially right in saying only the die-hard loony separatists really give a fig about it. Most of us here are more concerned with the troubled Caisse de Depot (which handles our Quebec Pension Plan) than either this or anything Sarkozy has to say about secessionists.

If I'm not mistaken, the Plains of Abraham is a national park -- a federal national park. That fact alone has always rankled the sovereigntists even though they manage to have that huge concert at the Plains on Fête Nationale. So to have a re-enactment on the 250th anniversary could be rightly seen as an insult.

The federal Liberals -- or more accurately the Department of Heritage -- staged a re-enactment 10 years ago for the 240th but no one got into a lather over it even if the PM at the time was the man sovereigntists claim orchestrated the "Night of Long Knives," Jean Chrétien.

I suppose what the real problem is that there is now a PM that actually recognized the people of Québec are a "nation," but then does something that runs counter to that or at least has that perception.

I'm with Jennifer on this one -- I've also been to war reenactments and the point is always made they're not putting on the show to glorify war but to emphasize how maddening it can get.

Great post, I love the idea of a "friendship party", they could hold it every year. That would be such a cool Canadian thing. I would come from Winnipeg just for the party. Harper playing to his base and trashing Quebec is disgusting behaviour and unfortunately the norm.

Hi Cari...I believe it has been celebrated before under the Liberals, and the regularly "celebrate" the defeat of the patriotes in 1837.
But I think since we are a delicately balanced country it's best to let sleeping dogs lie...

Hi jennifer...you know how much I like and respect you, but I have to strongly disagree.
You have to remember that we are in a unique situation in this country.We have a nation within a nation, and tensions that subsist to this day. To even risk exarcebating those tensions just isn't worth it. And a lot of non-separatist Quebecers just don't want to re-open those old wounds.
Trust me...I half live in their culture, I understand how a minority feels. Or just consider this paragraph in the CP story.

"Harper was applauded by the assembled CAE employees when he repeated his remarks in English, but there was no audience reaction when he first said them in French."

That silence speaks VOLUMES.
And is dangerous for our country...

Hi Scott...yes you're right it is a trivial thing compared to all those other things. But that doesn't make it not bad.
And the other things is that if you read the hideous comments in say the Globe and Mail you can see how much anti-Quebec feeling there is out there. And this whole controversy is only fanning it.
The brutal truth is that there is a hideous beast loose in English Canada. And it must be culled before it destroys our country...

Hi Blastfurnace...you and Jennifer can argue about the rationality of it all, but you HAVE to understand that you are dealing with emotions which may or not be rational but are REAL nonetheless. And this battle between two foreign generals before Canada became a country is not part of our shared history. For that you have to travel to Europe and visit the graveyards where French and English lie side by side.
We have a choice in this country. We can either build a mythology both peoples can share. Or we will lose it one day. It's as simple as that...

Hi militant dipper...yes the Plains are already a party ground during the St Jean Baptiste festivities. With a GREAT urban legend BTW. The story of the guy who was so high on mescaline he walked into the big bonfire !!!
But yeah...the more Canadian parties the better...

P.S. as a BONUS there are also little clearings and bushes where the French and the English partygoers can get to know each other better... ;)

I think the Harper agenda has taken another turn. The week after the budget was used to "nail Newfoundland" to quote Danny Williams in a manner that many people regard as revenge, he is trying to get back in your province's good graces by siding with Quebec in the border dispute, something which till now has been considered to "too politically sensitive" to determine.

I believe Williams is a principled and honest man, but do not have enough of the details to take sides. I'm will not say where the border should fall, but the timing (especially in terms of Harper's less than trustworthy record) is suspicious. Why do I get the sense this is about divide and conquer at a time when Newfoundland and Quebec are largely united against the Harper government?