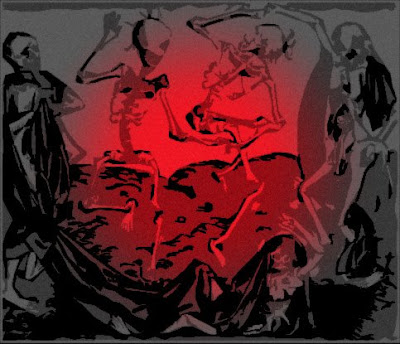 I wish I hadn't read the following story. Not today. It's too horrible. But now I have it haunts me.

In August 1949, an army unit stationed at Nirim in the Negev shot an Arab man and captured a Bedouin girl with him. Her name and age remain unknown, but she was probably in her mid-teens.

In the following hours she was taken from the hut and forced to shower naked in full view of the soldiers. Three of the men then raped her.

After the Sabbath meal the platoon commander, identified by Ha'aretz as a man called Moshe who had served in the British army during the second world war, proposed a vote on what should be done with her.

One option was to put her to work in the outpost's kitchen.

Most of the 20 or so soldiers present voted for the alternative by chanting: "We want to fuck".The commander organised a rota for groups of his men to gang rape the girl over the next three days. Moshe and one of his sergeants went first, leaving the girl unconscious. Next morning, she complicated matters by protesting about her treatment. Moshe told one of his sergeants to kill her
.
When the girl realised what was about to happen she tried to run, but only made it a few paces before she was shot by a Sergeant Michael.

Her body was buried in a grave less than a foot deep. A few days later the battalion commander, Yehuda Drexler, asked Moshe if he had carried out an order to return the girl to her village.

"They killed her," replied Moshe. "It was a shame to waste the petrol."

When I finished I felt ill. I wanted to write something more or less thoughtful. Like how could Jews do that only four years after the end of the Holocaust? When they of all people should know that when you want to massacre a people ....first you have to dehumanize them. Or why Palestians call the events of 1948 the Al Nakba or Catastrophe.

But all I have the strength to say is some men are PIGS. War turns all men into animals.That's why so many of them like it so much. That's why guns and missiles look like dicks.

And when oh when will women rule the world?

Labels: humanity at its worst, Israel, War as Crime

It is a deeply ingrained fear we live with every day, every night we walk alone, deep down. Take heart in her weakened condition she had fire in her heart to run, to still live.

Take heart in her weakened condition she had fire in her heart to run, to still live.

A very valid observation of a deeply disturbing and horrific event. The will to survive is a strong one and probably why the Palestinians have refused to be broken after so many decades of assault.

Thank you for writing, and for understanding, Simon.

War turns men into pigs because it is DESIGNED to turn men into pigs. The uniforms, the chants, the demonizing of 'the enemy' and the transformation of fellow soldiers into family worth defending to the death while being placed in a state of constant peril - all these are designed to break down our socialized inhibitions against killing other human beings for no reason.

Unfortunately, the process also breaks down a lot of other inhibitions.

The worse part is these men come home and have nowhere to put it in context. Suicide, spousal abuse, total waste of humanity. As for Israel, I suppose I will be called out for calling the state a cancer.

That platoon happened to be Jewish, but they weren't acting much differently from groups of war-hardened soldiers over the entire history of civilization. As Jennifer notes, the process defines the result. Here, the dehumanization process that makes boys into soldiers willing to kill on command is the starting point in the answer to how such a thing can happen.

For more on the subject, I recommend Gwynne Dyer's War, The New Edition (revised in 2004). Of particular interest is Chaper 2, "Anybody's Son Will Do".

I recommend this book by Michael Ghiglieri,Phd in Anthropology. Published 1999: THE DARK SIDE OF MAN: Tracing the Origins of Male Violence.

Hi anonymous...I hadn't thought of that. But you're right and it is something. Those brutal animals that poor little girl...

Hi Beijing...yup the will to survive is strong. And luckily for us all women are not only smarter than men...they're stronger too...

Hi skdadl...oh yeah I understand. My sister is a very strong feminist who taught me a lot of things when I was a small boy.So I don't just see the oppression of women as crime against humanity. I see it as a crime against the entire planet. Men and their macho attitudes have taken us to the brink of extinction. And only the
saner attitudes of women can save us...

Hi jennifer...you're absolutely right,but the process of turning boys into fucked up men begins even earlier in life.
The try to drive or beat any trace of feminine qualities out you. Although the last time I checked we're all half male and half female.
And even after the brainwashing the army gives you, most young soldiers die crying for their mothers...

Hi anonymous...yes so true. I can't imagine how anyone can go back to their families after doing something like that.
As for the state of Israel I don't consider it a cancer. It has a lot of good people, and some of the most searingly moral writing against the Gaza War came from that country.
What I believe is that Isreal is also a victim of it's long occupation of Arab lands. You can't occupy and oppress a people for forty years without dehumanizing them ...AND yourself.
Only peace can save them both...

Hi Scott...exactly...that's what I was trying say. These monsters happened to be Israelis...but every war is full of atrocities and crimes against women.
As you know I come from a family steeped in military tradition. And I have met many decent soldiers. But that doesn't change the fact that sooner or later war turns almost all men into animals.
And thanks for the recommendation it sounds interesting. I'll try to check it out...

Hi Oemissions...thanks for your book recommendation too. Geez what are you guys trying to do... EDJUCATE me? ;)
Seriously though it does sound interesting but very DEPRESSING...