How Low Can the Blogging Tories Go? 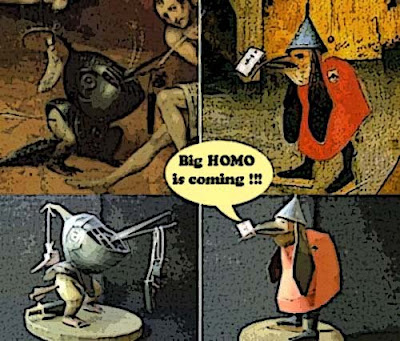 You know I don't expect much from the Blogging Tories. I expect them to go on and on about how global warming is a myth. Or how the Mooslims are invading our body fluids.

Or how Ezra Levant's fat ass should be bronzed...or polished with their tongues.

But I do expect better than this homophobic shite.

When prosecution in tainted blood case failed to prove that there is an HIV virus that could be transmitted thru transfusion of tainted blood and subsequently cause development of AIDS condition, Toronto homosexuals knew that their "HIV virus causing AIDS" scam and gravy train of government grants for seeking cure for "virus" was in danger of falling off the tracks.

What was started years ago as a way to terrorise heterosexual men, legitimise theory of "HIV virus" as a cause of AIDS, and way to blackmail (shake down) federal and provincial governments for HIV research grants (ransom) money does not look so attractive today as legal precedents that are being created now could easily be used to prosecute and incarcerate for many years majority of homosexual activists operating today in Canada.

Irony of the situation is the fact that members of BIG HOMO lobby know that AIDS is caused by sodomy and autoinfection of abdominal cavity with common bacteria and viruses residing in digestive tract leaking thru walls of damaged bowel.

Kookamunga. Who is Big Homo? Who is Karol? What the fuck is he talking about? Should we call the insane asylum...or dial 911?

And when did the Blogging Tories become Free Dominion? Stephen Taylor must be so proud of himself.

But I guess I should have known that if they were willing to let Kathy Shittle twitter. It wouldn't be long before the place was a shitter.

As for the freaky homophobe Karol all I can say is this: How did you know I was BIG dahling?

"Big Homo" is probably the best laugh I've had all day.

Oh no, not Karolak.

He's a certified basket case and online stalker. I had to ban him from commenting at my place, but he still emails me relentlessly.

Even at FD they think he's a nut.

I wonder if he was listening to the latest from Devo on his cassette Walkman when he wrote that.

Where's this person been since the mid 80's?

Funny - further down someone mentions that this guy has already been banned from their forums... and yet, there he is. Still.

At least the other commenters seem to be almost as offended as they should be at this repugnant prick.

Next up: How sanity was invented to terrorize the insane.

I consider him an anti-Semitic creep. I don't know of his other postings elsewhere and this was the first time I encountered his rantings on this particular issue. Frankly, I'm glad he's gone.

Hi woozie...I'm glad to hear that. It is pretty funny isn't it?. I probably could have had a little more fun with that one. Maybe a little more photoshop fun too. Oh well there's always a next time... ;)

Hi JJ...OMG you mean he's a SERIAL stalker !!!
You know now that you mention his surname I think I once received an e-mail from him after I wrote something about Dr Morgentaler.
I think it was about ten miles long. So I felt a bit guilty deleting it after reading only the first three lines.
But now I don't... :)

Hi Jay... WTF? indeed. I did try to read his post to try to understand what he was talking about. But when I got to bowel part I had to give up. Only a witchdoctor or a wichity grub could come up with something like that.

" I wonder if he was listening to the latest from Devo on his cassette Walkman when he wrote that."

Hi Jennifer...now that you mention it I see what you mean.
I'm going to have to give those Cons half a brownie point for that. Damn.
But still what's a matter with that site. I can't imagine anything as disgusting as that appearing on a progressive one.
And if Carol...I mean Karol is as nutty as he appears to be, how come
he's not only allowed to print his filthy garbage...but start a whole forum as well?
But then they're probably all in shock. Their whole philosophy lies in ruins. Maybe they should just give up blogging and start a choir instead. I think I can hear them now...
"Oh Carol we are just poor fools
Baby they fooled us.
Now we are just TOOLS... :)

Hi Bina...yes I must admit between the stuff about the bowels ...and his bizarre claim that AIDS was invented to terrorize straight guys...I was staring at the screen with my mouth open wondering whether I was having a stroke...or a stupidity attack...because it just didn't COMPUTE...
But now i feel better .... :)

Hi John...Oh no not anti-semitic too. I guess haters don't discriminate. BTW I noticed your comment on that board. Good for you...

Stephen Taylor's a good guy though I don't agree with a lot of his ideas. From what I know about him, he's a queer-friendly libertarian and a nice decent guy.

That said, that Karol freak is a lunatic.

Hi Tim...oh yeah I'm sure Stephen Taylor is a decent guy... for a Conservative ;)
But letting Krazy Karol fire a turd like that one into the back of the net deserves two minutes in the penalty box...

Hi Dr Dawg...yes I see it has disappeared. I liked Craig Smith's comment. Now if only I could see the look on Karol's face... :)