The Greatest Economic Crisis in 100 Years? 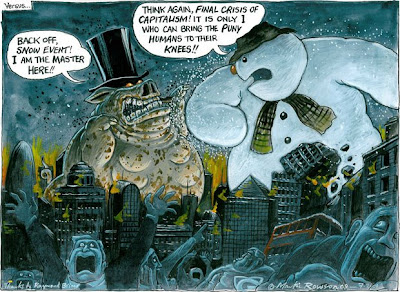 In Britain a monster recession and a monster storm are battling each other to see who can make the country collapse first.

And so far the storm monster is ahead.

Roads in Gloucestershire will be treated with table salt on Sunday night, after low supplies of rock salt forced the local county council to resort to ordering 500 tonnes of normal white salt.

But The Beast is gaining.

Britain is facing its worst financial crisis for more than a century, surpassing even the Great Depression of the 1930s, one of Gordon Brown's most senior ministers and confidants has admitted.

Mr Balls said yesterday: "The reality is that this is becoming the most serious global recession for, I'm sure, over 100 years, as it will turn out."

He warned that events worldwide were moving at a "speed, pace and ferocity which none of us have seen before" and banks were losing cash on a "scale that nobody believed possible".

"These are seismic events that are going to change the political landscape. I think this is a financial crisis more extreme and more serious than that of the 1930s, and we all remember how the politics of that era were shaped by the economy."

Meanwhile in the sleepy Great White North...where Stephen Harper's Cons can't even agree on whether we need to do MORE.... to protect Canadians from a potential economic and social CATASTROPHE

Because they didn't see it coming, and they don't know what they're doing.

I head down to the harbour to watch the proud swans begging for crumbs outside the local Tim Horton's. 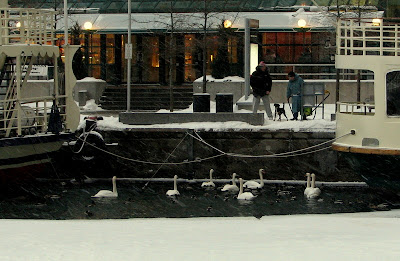 And I can't help feeling that so many Canadians are still in a state of denial. 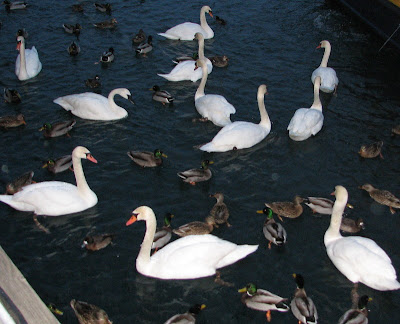 With absolutely no idea how bad it could really get.

The awakening will come. The feathers will fly.

And it will be BRUTAL...

Whooee! I reckon the swans an' ducks'll fare better than us humans in a real economic crisis. I ain't seen too many ducks with mortgages. If we slow down with the dirty pollutin' industries fer a spell, the ducks'll have cleaner air an' water. Clean air an' water don't matter to humans, but ducks take to water like ducks to water, as they say.

Sounds like happy days ahead fer the Siberians labourin' their lives away in the salt mines. Silver linings all over the place, sez I.

Well I got laid off because the small software company I worked for couldn't make payroll suddenly. They can't pay any of the bills because they can't get financing and they can't get their customers to pay their bills. Sometimes when they DO pay, the wire transfers are held back for ridiculous reasons owing to a European bank in the middle that has no liquidity itself. It's like the whole world's institutions are all suddenly only paying anyone if they absolutely bloody well HAVE TO, like if a collection agency has been busting their chops for months and they are being served with lawyers' letters.

I can just hear it: "Okay, Phillips over in Accounts Payable, in that case, go ahead and pay that $3,873 bill to the Acme Upstart Co. And good work staving that other company off we owed $139,000 to. I see they went belly-up and that means bankruptcy court pencil-pushers will get around to noticing what we owe at some point six months from now.

I got the minimum severance as dictated by law, by the way (two weeks), and they haven't issued my pay or severance owing. But I don't blame them, considering all the ways they tried to finance the company bottomed-out on them at the same time. Of course EI is overloaded and I have to wait a few weeks still to get anything there. I have to submit my Record of Employment to them, but my former employer is dragging their feet on that too.

You see, they were a successful company with a good product and big ticket customers (some even Fortune 500) - this is all new to them.

They've never had to lay anybody off before...

I was looking at the salaries of hockey, football and baseball and basket ball players. The top 25 had salaries of 20 to 30 million dollars in each sport.
That is for one year to each player.
What a weird economy.
As for storms, I love them because I get some peace and quiet from relentless traffic.
I chuckle to see them in their autos trying to get going or stuck in the snow because they all refuse to use public transit and make little attempt to car pool.

Hi Jim Bobby...oh yeah the ducks and the swans will do better than us...especially since I feed them.
The way I see it if things get really desperate that gives me the right to catch them and eat them. And yes that a great cartoon wasn't it? If I could I'd blow it up and hang it on the wall of my new hovel. I figure I better get accustomed to living below my means now...as well as practicing starving two days a week...so when the monster arrives I'll be ready...;)

Hi Scott...I'm really sorry to hear about this. And it makes me really angry to hear how you have been treated, and how you are being made to wait for E.I. It's simply outrageous especially since it's OUR money not tghe fucking governments. The last thing a person needs when they lose their job is to have to take all this nonsense from heartless bureaucrats. What makes me even sadder is that you're just the latest friend to lose a job. Just about all of my friends are worried about losing their jobs, or have had their hours cut so though they are still officially employed they are barely making enough to live on.
And I've had my shifts reorganized so I'm also losing thousands of dollars that I can hardly afford. If Sebastien wasn't getting a decent wage we'd probably be looking for another place to live. So count me lucky but worried. We really need to reclaim our country and demand that E.I. cover everyone, and provide better benefits and retraining.Get our priorities right because as far as I'm concerned this shite isn't Canadian.
I can only wish you and your family the absolute best of luck. I hope you can find another job soon and put this nightmare behind you...

Hi Oemissions...yeah life isn't fair. Although I honestly have to wonder how long teams are going to be able to afford those huge salaries when a lot of people won't be able to afford to attend the games.
As for the snow...I know I shouldn't laugh...but some of the stories I've heard about Britain are hilarious...especially the table salt. And then there's the story my mum in Scotland told me.
She told me our dinky village council had run out of money for grit...because they had invested heavily in ICELAND...
I mean really...can the end be far off ? :)