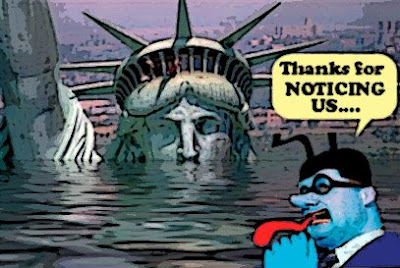 Well I see Great , , Loser Leader was in New York City today. Trying to sell some dirty oil, and thanking Americans for noticing us.

"We have the largest trading relationship in history, and the one thing we often suffer from is because we're not a squeaky wheel, we often don't get the grease and we're forgotten," Harper said.

"It was great to have that kind of attention from our great friends in the United States."

As if the Americans don't have their own problems. As if anyone was paying attention.... I mean anyone important.

Money for Breakfast with Alexis Glick? A Canadian Prime Minister? OMG. Will this ridiculous incompetent Con EVER stop humiliating us?

Will somebody please grease HIM up?

And too bad about the dirty oil.

One evening last July the clouds had merged into a band of dust sweeping west across the devastated landscape. It was being sucked into the updraft of a storm cloud. In the distance steam and smoke and gas flames belched from the stacks of the Syncrude and Suncor upgraders—"dark satanic mills" inevitably come to mind, but they're a riveting sight all the same. From many miles away, you could smell the tarry stench. It stings your lungs when you get close enough.

"It's a struggle to balance the needs of today and tomorrow when you look at the environment we're going to live in," he says. In northern Alberta the question of how to strike that balance has been left to the free market, and its answer has been to forget about tomorrow. Tomorrow is not its job.

You know what they say eh? One picture is worth a thousand SQUEAKS.

But I guess Stephen Harper figures the more he talks up the dirty oil, the more the Americans will check it out. And the more they'll pay us to put it back in the ground. To save the planet for their kids.

Oh yeah...I forgot to mention...he's also telling the Americans how great our economy is doing.

Golly. Why do I get the feeling that letting this dirty oil pimp drive our economy is like hitching a ride with another reckless idiot?

And heading straight into the eye of The Monster....

Yikes. Why do I feel that with Great Idiot Leader at the squeaky wheel ? Squeak. Squeak. Thanks for noticing us !!! Pssst....wanna buy some dirty oil?

Before we collide with reality.

Wonder what the idiot leader thinks about today's announcement out of the WH? Wake-Up Alberta! On Thursday, President Barack Obama will present his 2010 – yes, 2010 – budgetary proposals. Albertans in particular and Canadians in general might get a shock.http://www.theglobeandmail.com/servlet/story/RTGAM.20090223.wcosimp24/BNStory/specialComment/home

I saw him on the telee but I couldn't connect the voice and lanquage with the guy. He kinda sounded like Ignatieff,using those weird guy to guy ,sort of redneck terms like grease and wheels and as I write this I can't help but remember our dear Sarah up there in Alaska.
I guess he's having a personality makeover.

Hi anonymous...yes despite Harpo's ridiculous attempt to make it sound like he and Obama are on the same wavelength they clearly are NOT.
And for Harper to claim that intensity based targets and hard caps are the same thing is practically FRAUD.
The man lies about EVERYTHING...

Hi Oemissions...yes this is the personality makeover of all time.
He's tried to do that before...but this time he's pulling out all the stops and posing as a LIBERAL.
I just hope Canadians aren't fooled. But they've been fooled before so I'm not optimistic....