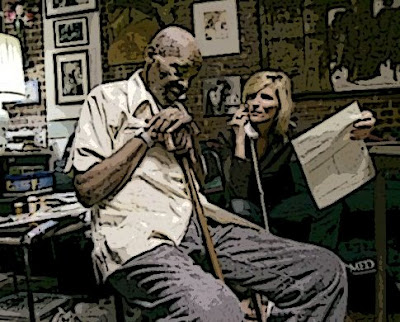 While many gay kids today are loud and proud, and there are more and more services aimed at helping them cope with the bigotry and the bullying, many gay seniors live lonely lives of quiet desperation.

Neglected by the health system...invisible even in the gay community. They grew up before Stonewall, before gay sex was legalized in Canada in 1969.The brutal oppression of the past has left many of them traumatized, fearful, and isolated. Unable to socialize with straight people their age... because so many straight seniors cling to the homophobia of the past. And no places for gay seniors to meet.

So the gay community has been trying to create spaces and groups where these seniors can get together, socialize, organize, play cards whatever. But most of all can feel free and SAFE to be who they are. At last.

So you can imagine how disgusted I was to see that one of these refuges....the Pride Centre in Edmonton.... is struggling to survive. After losing its charitable status because Stephen Harper's foul Cons have declared it political.

On Friday, the Canada Revenue Agency could not confirm the exact circumstances, but apparently the GLCCE lost its charitable status when the federal government deemed it political.

You know these creepy theocons.

Who are still waging war against gay people,and women,from behind the curtains of the PMO.

So a Pride Centre that helps the victims of homophobia is considered too political. But religious fanatics who preach hate and tell people who they can't vote for, depending on their position on abortion or gay rights, are NOT.

Is Focus on the Family, a registered charity, an apolitical organization?

In 2003, Bishop Frederick Henry, of Calgary, declared that then prime minister Jean Chretien was putting his eternal salvation in jeopardy by introducing same-sex marriage legislation. "He's making a morally grave error," said Henry, "and he's not being accountable to God."

Because Focus on the Family and the loony tune homophobe Bishop Fred Henry are not POLITICAL.

So gay seniors could be left out in the cold...victimized yet AGAIN by the hideous homophobia that scarred their lives... and left them isolated, lonely, and frightened.

As if they haven't suffered enough.

I've said it before, and I'll say it again. Until we drive Stephen Harper and his creepy theocon conspiracy from power, no woman or gay person in Canada is safe.

I'm not sure the exact timeline here but the article does say the GLCCE closed in 2004, a full two years before Harper took office. This means Revenue Canada would have deemed its actions political before then, or they're looking back now under different glasses.

In either case, I'm not convinced that we can 100% surely blame this one on the HarperCons (as much as we may want to).

If an drop-in for older gay persons is political, then what does that make a pregancy crisis centre?

Or is a pregnancy crisis centre not political because it upholds life and the Bible?

Fred Henry and his likes do far more harm than good in this world and the well-meaning persons trying to make life better for the vulnerable and disadvantaged get steamrollered and sidelined by the likes of fundies and other questionable persons?

As for Fred Henry, all I can say is where's a cheese wire when you really need it?

What will Stephen Harper do if his son one day says:"Dad, I'm gay!"

Hi Ian....I must admit even though I did some research it's not clear to me either.
But if the Pride Centre is a new entity wouldn't that require a NEW ruling?
So I have to believe that the Cons are preparing for an election. And this cruel act is just another way of strengthening their base...

Hi Torontonian...yeah I agree it's absolutely absurd isn't it? These hideous Cons are always putting their rancid ideology before the real needs of people.
As for Uncle Freddy don't get me started...
I know I have a great photoshop of his head on a pig somewhere...I just have to find it... ;)

Herr Harper and his "focus on the family" gang are doing everything they can, including breaking the law of Canada to deny rights to LGBTQ people.

And the main-stream media is too gutless to report on his illegal tactics.

Has anyone even questioned why Harper's Minister of Canadian Heritage has been hauled before the Federal Court to explain why he is illegally blocking the release of government records that the law says must be disclosed?

Of course, no media will report that HarperCorp doesn't want a human rights activist to produce them in court to show that even Heritage Canada determined that the "Catholic Insight" magazine was publishing hate materials. And they don't want the public to know that this homophobic hate material was being paid for with Federal Government subsidies and grants.

Isn't deliberately preventing the courts from knowing all the facts considered "obstructing justice"??

I am a in closet gay senior (61), in redneck cowboy Edmonton. I am all alone & will be alone the rest of my life. Harper hates people like me & I have no idea why. I have to hide or be hated. If any other seniors want to be friends, please email me "bobcas2006@yahoo.ca" Bob

Hi anonymous in Edmonton ...I'm sorry to hear that you are alone and feel you must hide. You know I don't want to lecture an older gay man... :)
But you've got a lot of life ahead of you and it's never too late to come out. Don't be afraid you don't have to come out to EVERYONE. Join a gay senior's group and you'll meet all kind of people. We all live one life brother and NOBODY has the right to tell you how to live yours. So do what you have to do and I'm sure you'll find love...