The Con Klown War on Russia 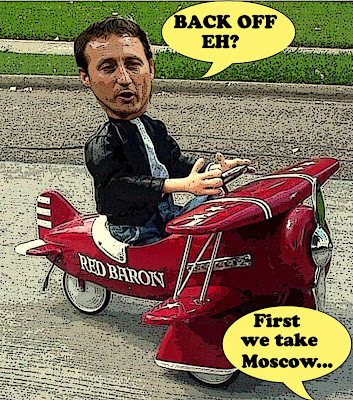 You know I always knew Peter MacKay was too dumb to be Defence Minister. I knew that even the dog he borrowed could do a better job. I knew the Cons are too crazy to run our foreign policy.

But this latest stunt by these incompetent klowns really is the limit.

"I'm not going to stand here and accuse the Russians of deliberately doing this during the presidential visit, but it was a strong coincidence which we met with the presence ... of F-18 fighter planes and world-class pilots that know their business and send a strong signal that they should back off and stay out of our airspace."

"All the international flights regulations were strictly respected," he said in a statement. "Therefore, the very possibility of a violation of Canadian airspace is out of [the] question. The adjacent countries were informed of that flight in good time."

So a routine flight gets turned into an international incident, and the world is a slightly more dangerous place tonight thanks to OUR idiot Cons.

And for what? So Great Chunky Chickenhawk Leader can pose as a warrior...and rile up his rabid base.... by sounding like a braying jackass?

Speaking in Saskatoon, Prime Minister Stephen Harper said Friday that Russian intrusions into Canadian airspace are "a real concern," but that Canada would defend its sovereignty.

"I have expressed at various times the deep concern our government has with increasingly aggressive Russian actions around the globe and Russian intrusions into our airspace."

When they're NOT intruding into our airspace and Arctic sovereignty has never been weaker than under this Con regime. Last winter we couldn't even send up a patrol aircraft because they were all in the repair shop. And there are so many submarines up there the polar bears have been hitching rides on them.

You know these foul incompetent Cons are slowly destroying our country. But when they start threatening to destroy the world isn't enough enough?

Until the left can scramble its forces and bring these Cold War RepubliCons down in flames.

Canada won't be safe and neither will anyone else...
Posted by Simon at 10:06 PM

Just the title alone had me LOL. Oh gawd, you are so good at skewering these tin soldiers. Thanks for the chuckles Simon.

Are you just an idiot or are you playing stupid?

Hi Beijing...I'm glad you liked it.
Although I've been surrounded by soldiers all my life...and quite like a few of them...especially one.. ;)I can't stand absurd chickenhawks like Dumbo MacKay and Harper.And their ridiculous posturing almost makes me barf. I also found the way the media played into their hands absolutely PATHETIC.
Even the CBC was yapping about it ad nauseam.
Part of the problem with these Cons is that they are allowed to get away with murder.It's so depressing...

Hi lance...you put me in a difficult position, because actually I don't trust the Russians or the Cons...because they both lie all the time. But luckily I didn't have to. I just read what NORAD and other Air Defence specialists had to say about these ROUTINE flights and came to my own conclusions.Like any other rational person would if they weren't blinded by ideology.
Oh...as for your last question that's a difficult one too. I think I am an idiot who likes playing stupid. But what are you a stupid who like playing idiot? Think about it... ;)

Hi Oemissions...yes that's what's worrying me. The idea of Dumbo MacKay and Great Stalin Leader posing as warriors...and standing on guard for us. You know the thin blue line of idiots...
Although I suppose if the Russians do invade we can use Harpo to lure them into the tar sands...and hope that none of them ever come back... :)