Guantanamo Guards go on a Rampage 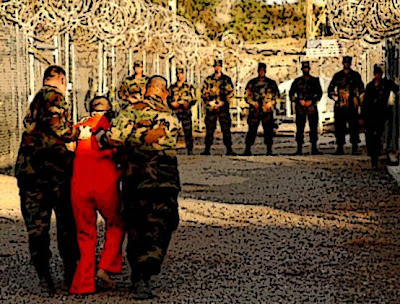 I see that the war criminals at Guantanamo are having a farewell bash. Where they get to say a long farewell to their nasty little gulag.....and bash the prisoners.

Abuse of prisoners at Guantanamo Bay has worsened sharply since President Barack Obama took office as prison guards "get their kicks in" before the camp is closed,

"If one was to use one's imagination, (one) could say that these traumatized, and for lack of a better word barbaric, guards were just basically trying to get their kicks in right now for fear that they won't be able to later..." 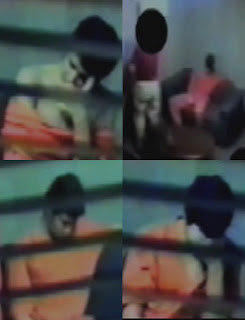 Foreign Affairs Minister Lawrence Cannon says he told his U.S. counterpart that Canada will not interfere in the case of Omar Khadr, the only remaining Western prisoner in Guantanamo Bay.

Even though Omar doesn't even have a lawyer.

The attorney for a Canadian-born detainee at Guantanamo Bay, Cuba, says the center's chief of military defense lawyers won't permit him to see his client.

Your web site should be called "the Montreal simple simon " web site ...Khadr is charged with many serious crimes and I for one,applaud the actions of our government!This child terrorist (trained when he was 13 years old) is right where he belongs...What do you think Khadr is accused of...jaywalking???..And any blogger can parrot the old truisms...Khadr is a child soldier..Khadr is innocent...Khadr was just defending his country...Now you're parroting "Gitmo guards on a rampage" ..Could you show any proof you actually have or are going to quote another "WEB SITE " The Americans have Khadr and you know what ,they can f***ing well keep him..Khadr may finally get his day in court DESPITE his slimeball lawyers best efforts to avoid prosecution..I will not shed a tear for this terrorist thug and he deserves NO sympathy from any Canadian!

Khadr was only a stats when the original incident report was made in August 2002. He was wounded and rounded up after a reported fire fight that occurred after an aerial bombardment of a building said to house AQ members by villagers (after a raid of the village by US Marines and Special Ops).

It was only after detention and torture at Bagram that the US discovered that Khadr was related to the infamous Khadr Sr. who was close to AQ higher ups and had brought his whole family, including Canadian born children, to live in Afghanistan. That was some months after the initial incident.

At that point, the colourful propaganda story broke. The initial incident reports were revised and embellished to suggest that Khadr had purposely targeted a medic with a grenade. In fact, under gun fire, the 15 year old was cowered against a wall and lobbed the grenade over it in self-defense. The "medic" was actually a special ops soldier who happened to be cross trained as a medic but was part of the assault team on that day.

If you do a "way back" internet search you will stumble across the original Voice of America reports of combat incidents and casualties.

Besides the propaganda, the fact remains that Canada is a signatory of the UN protection of child soldiers treaty. The US of course has ducked its own constitution and Geneva Conventions by creating a category of prisoner (enemy combatant) to defy the intent of any and all laws that safeguard prisoner rights to due process and humane detention.

Canada wants to play the same game of shirking its responsibilities by defining Khadr as NOT a child soldier and not a person worthy of any rights. It's absolutely shameful.

Yes. Very SHAMEFUL.
If he was a real terrorist, wouldn't he be shouting glory to Allah loud and clear everyday?
As for the guards, I say line em up and give em 5 shots with a Taser.
And I thought I was a pacifist!

Omar Khadr isnt' ever going to come back to Canada:
http://fakirsca.blogspot.com/2009/02/life-and-times-of-omar-khadr.html
so it doesn't matter what anyone thinks about this, anymore.
He's the Americans' problem, now.
Marnie Tunay
Fakirs Canada

Hi anonymous...well if I'm Simple Simon who are you...the Pieman?
Look...take this down in writing because I don't want to repeat it again: What you or I think about Omar Khadr is IRRELEVANT. Khadr is a child soldier according to the U.N. Protocol on Child Soldiers that we were the FIRST to sign. And should be rehabilitated not punished. As for the Guantanamo guards....if you read the story carefully you'll see that the Pentagon itself confirms that abuse has taken place. And it has gone on for YEARS. Why do you think that Obama wants to close it down? So get a grip on yourself and start acting like a Canadian not a Pentagon stooge...

Hi Beijing...thanks for clearing some things up for anonymous. But I have to correct you on one point. Since there was another fighter still alive in the compound...and Omar had been blinded by shrapnel I doubt that he could have thrown the grenade.
But you're right about Canada's treatment of a child soldier...it's an absoluite DISGRACE...

Hi Oemissions....yes it is amazing that Khadr hasn't been sucked into the circle of religious fanatics imprisoned at Guantanamo. Considering the physical and mental trauma he has experienced the fact that he remains a friendly, gentle Canadian kid is something to celebrate.
As for the guards...I wouldn't go as far as wanting them to be tasered but they definitely should be put on trial....

Hi Marnie....I think I've replied to your fanatic missives before so I won't bother doing that again. Except to say that you don't know what you're talking about. If Khadr ever get to go before an American civilian court the "evidence" against him would be thrown out in five minutes...and ten minutes later he's be FREE.
And he will be coming back to Canada sooner or later because he's a Canadian and this is his country. So there...

Simon, I know that that sounds harsh but I have been wrapped up in those RCMP officers and the questioning going on at the inquiry. Everytime I hear the shots and the first screams from him I feel it myself and I have to turn the sound off because it is unbearable.

Hi Oemissions...hey I don't blame you. I can't watch it either.It's so horribly cruel and unnecessary.
If four big officers can't be trained to overpower a troubled person without using a weapon they should look for another safer job...like a crossing guard. And as for tasers I think they should be banned...or at the very least extremely controlled. Because it's clear many officers are not fit to use them...

Thank you for the reply Simon. I too believed they should be banned.
Its TORTURE!
And why couldn't they have waited until after this inquiry to draw their conclusions about this weapon?

No end to the number of letters one has to write these days,especially to higher authorities.

Maybe we all would be easier on them if they would stop flying commercial aircraft full of innocent people into high rise buildings.