The National Post's Assault on Quebec 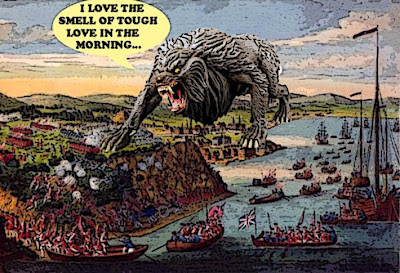 I didn't really want to write another post about the new/nouveau Battle of the Plains of Abraham. I find it too depressing. But since the National Beast has dragged its bigot belly into the fray, I feel I have no choice.

Because I honestly believe this is the most disgusting, outrageous, and irresponsible editorial I have ever read in a national Canadian newspaper.

Enough of the decades of appeasement; it's time for Ottawa to adopt a tough-love attitude toward Quebec. And who better to do that then Mr. Harper and his Tories? They've got nothing to lose.

They can start by reinstating the Plains of Abraham re-enactment and, if need be, providing federal security for the event. They also can end the unofficial federal policy that as near to half as possible of all federal defence spending must go to manufacturers in Quebec.

Let's also take away the Quebec chair at the Francophonie. Defend vigorously in court any challenges filed that seek to uphold the minority-language rights of English-speaking residents in Quebec. And stop jumping out of your skin every time Quebec says boo-hoo.

Disgusting and outrageous because as even the most federalist Lysiane Gagnon points out, it's not just a separatist thing.

Of course the radical fringe of the sovereigntist movement that threatened to disrupt the show was wrong, but this is not the point. Such angry reactions are to be expected when an event is deemed offensive by a large part of the population. Contrary to the reports that circulated throughout Canada, the opposition was not limited to militant sovereigntists. It came from large numbers of francophones, including many federalists.

Irresponsible because you don't threaten to use force on a nation within a nation with the most organized separatist movement in the Western world.

And truly evil because it plays to an ugly streak of anti-Quebec feeling in English Canada. The one that would have given Stephen Harper a majority when he attacked the Coalition by whipping up hate against that province.

The one that results in hundreds of comments in the media and on blogs calling for Quebec to be thrown out of Canada, and Quebecers humiliated, beaten, or hung and shot as traitors.

Who would feed the beast that would destroy our country...to please the ugly rednecks in Alberta.

Anyway.... I've said most of what I wanted to say here.

So all I want to add tonight is that we will NEVER find our shared history on the Plains of Abraham. Because that battle isn't like the Battle of Waterloo....it's more like the Battle of the Boyne. The one the Orangemen in Northern Ireland celebrate every year to try to intimidate and put down the Catholics...five hundred years later.

If you want to find our shared history you have to look for it in places like the military cemeteries of Europe. 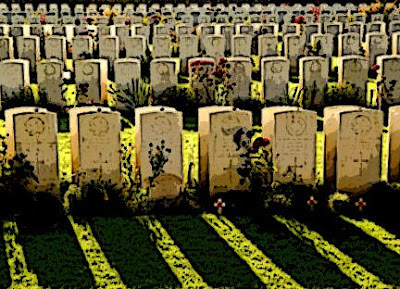 If you want to create a shared mythology you look at what happened after the battle of Dieppe. When French Canadian prisoners were offered a chance by the Vichy regime to take off the chains that the other Canadian prisoners wore. And they refused and marched across Europe in chains with their English Canadian brothers.

How come we don't celebrate THOSE stories? Or mythologize them like the Americans do? How come in a country as big and as beautiful as Canada so many people are so ugly and LITTLE?

Oh boy. All I know is this. There's a dirty yellow fanged beast loose in English Canada. Stephen Harper and his Criminal Cons are planning to ride it all the way to a majority.

And unless it's culled .... and quickly.

Bravo, Simon! I say that as a French-Canadian and a federalist.

The National Beast is already largely irrelevant and well into it's death throes but they seem intent on helping Fearless Leader do as much damage to Canada as a whole as they can before their time expires.

it's more like the Battle of the Boyne. The one the Orangemen in Northern Ireland celebrate every year to try to intimidate the Catholics...five hundred years later.

That is exactly what the proposed re-enactment amounts too.

What those who feel they need to revisit the battle should do is watch this excellent NFB documentary that is now available in full on-line:

I saw it on the big screen when it first was released in 1997 and it's excellent. It should be shown in high schools across the nation. It would do more to inform our kids about the history of this country.

This hate grows deep. Its fangs are yellowed and sore. I was born of this. But the National Post is another story. It is beyond even with my anti-French upbringing. It is diabolical. Montreal Simon, a word of advice, give yourself a break and don't read the agents of ignorance. It's just not worth it.

skewing slightly off rant, I thought the French Vichy government was only a WW2 phenom. But I'm interested in the story. Is there a place to read up about it?

It is a pretty stupid editorial. Always lump all of Quebec together and paint it with a single, intolerant brush. I like your analogies Simon. They're bang on.

I never knew the story about the Dieppe prisoners. Now THAT is a tale of national unity. You're right, it needs to be told more often.

Hi Frank....thanks. I didn't know you were a French Canadian.But now that I do I'm raising your ranking in my eyes from A to A+... :)
As for The Beast I wouldn't be so angry if it didn't play to ugly feelings out there. I'm also very disappointed that more columnists and bloggers didn't criticize it. Oh well... vive la difference !!!

Hi Beijing...thank you...you know I wanted to say something more about the Orange Parade. Because I once spent the night in a Catholic neighbourhood of Belfast the night before the Orange Parade... when the Protestants light huge bonfires that light up the sky Orange. So I've seen their message of hate and supremacy. Felt it in my bones...felt a shiver go down my spine.
So although of course it's not as bad here, I hate to see this anti-Quebec feeling because one you light the fires of hatred they're hard to put out...

Hi Jym...you know growing up in Quebec I never felt this Beast. And I have to honestly say although I know a lot of separatists ...and some pretty wild ones... I have never heard that kind of hate directed at English Canada. And if I ever did I wouldn't stand for it either.
So it's depressing. As for the National Beast I do try to stay away from it...and I only heard about this article when Sebastien pointed out a story on it in La Presse.So after that I HAD to write something eh? :)

Hi Niles...yeah you're right...but it was the Vichy collaborators or the Petainists who offered the French Canadian soldiers captured at Dieppe special deal. Not just no chains but also full rations instead of half ones.
I learned that when I was doing research for a project in university. But when I tried to look for it tonight I couldn't.
But I'm sure it's true...and it is a great story isn't it?
If only there were more of them...

Hi Geordie...what I hold against Harper is that he pitted the country against Quebec at the time of the Coalition. In my opinion no Prime Minister of Canada...whatever party he or she belongs to...should do that.
Not in a country with its own special history, and one so riven by regionalism. What I seek are ways to unite us...

Hi Scott...yes this idea of collectively punishing the province because some Americans in costumes wanted to play their ridiculous war games and divide our country is simply out to lunch. And extremely irresponsible. You know I'm STILL upset about that article and I won't forget it for a long time...after the Beast is dead. I hope... :)

Hi Bina...it is a great story. As I was telling Niles I read it when I was in university, but couldn't find it when i wrote the post. Don't worry though I will... :)
But can you imagine what the Americans would have done with it? There would have been at least three movies by now....