Michael Phelps and the Reefer Madness 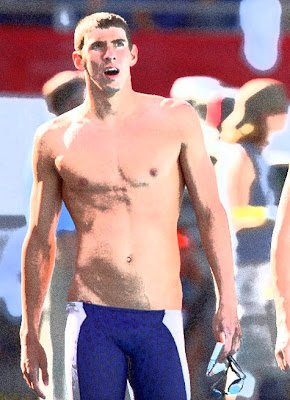 OK. I better admit it right off the baseball bat. I'm a HUGE fan of Michael Phelps.

For the way he swims. For the content of his character.

For his awesome ability to drive while drunk.

And of course for his tight body.

And his enormous fingers... 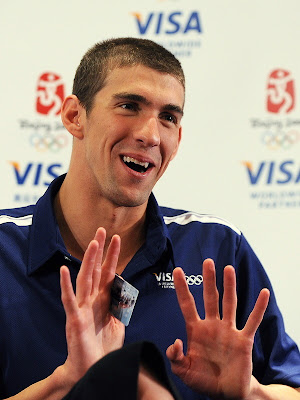 And now for his Godly ability to use his massive lung power. 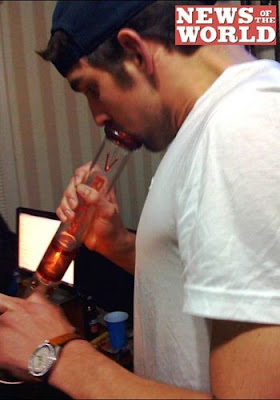 So as you can imagine I'm EXTREMELY disappointed by his grovelling apology for the "crime" of smoking a little marijuana.

"I engaged in behaviour which was regrettable and demonstrated bad judgment," Phelps said. "I'm 23 years old and despite the successes I've had in the pool, I acted in a youthful and inappropriate way, not in a manner people have come to expect from me. For this, I am sorry. I promise my fans and the public it will not happen again."

Totally disgusted by the way the media has blown the story out of proportion.

And practically nauseated by the stench of hypocrisy.

My position? If Phelpsie can have a little dope now and then....and win eight medals....maybe we should smoke up Team Canada before the NEXT Olympics. So we can win some too eh?

Or maybe we should just LEGALIZE it.

I mean really. Twenty-two years after Peter Tosh was killed, people are still being busted, jailed, or humiliated for smoking a drug that's safer than beer?

And the rest of us who haven't been arrested...yet...are still waiting for the insanity and the hypocrisy to end. What a bummer. Talk about reefer madness.

Anyone know where I can get a bong?

I don't know what it is about this little plant that drives people nuts. Perhaps it brings people pleasure. They laugh and have fun while imbibing. Must be a bad thing, then.

Yeah I was all excited... it's been awhile since I had an Olympian to look up to... and then along comes the most kick ass Olympian EVER... well for two minutes until the powers that be shamed him into making a disgusting apology to appease soccer moms.

I don't know if LZR in the Speedo LZR suit is pronounced "laser" or "loser."

Unlike you, Simon, I am not a fan of the Lurch Zooming Reeferman. I still think he won by technical doping. Phelps didn't win the races; his suit did. Actually, I am ticked off because the female swimmers now wear the super-burqaLZR swimsuits.

Err...I thought that 'performance enhancing' drugs were baaaaad for athletes going for commercial endorsement level publicity. I was under the impression that ganja was anything *but*.

Didn't the skiboarder just shrug it off and wasn't banned from anything? Or did he get off on a technicality of inhaling a room?

But yes, that is a fearsome criminal there. But then, I had an argument with someone pumped about "Boy George" finally getting put away instead of coddled. I said (innocently enough because I hadn't followed the unfortunate musician's downward spiral) Oh? He's been convicted of kidnapping others before this and skated? Well, no, he got caught on drug possession and didn't go to jail, the horrible person. (Skipping actually looking up the guy's record to see if he had done any time or not) I said, oh...so you think non-violent drug charges should result in serious jail time instead of rehab? Oh jail is rehab, because he wouldn't be able to get the drugs there. I just looked at him for a long moment and then we had a 'discussion' I won't repeat here. But hey, it's good to know Phelps is being totalled before he gets to the criminally violent stage of *his* druggie career (roll of eyes)

Hi Jymn...my feeling exactly.This war on marijuana is far more damaging to people's lives than anything the drug can do. The whole history of that war shows it's nothing more than an excuse to put down first black and then young people. And I'm so disappointed that Canada wasn't able to at the very least decriminalize small quantities...

Hi MERBOY...yeah I know how you feel, but I don't really blame Phelps, I can only imagine what pressure he must have been under from all those sanctimonious hypocrites.
I am glad to see that his sponsors are not abandoning him, so maybe it'll turn out OK by showing that even the Gods smoke...and still swim faster than anyone.... :)

Hi Skinny Dipper...look I admit it I don't know anything about swimming. But do you really think it was just his fish scale suit?
I just look at that body...with it's elongated shape...and it's paddle-like hands...and I can't help but think that if you could genetically design the best swimming machine it would look just like Phelpsie.
But of course I would prefer it if they didn't wear anything at all. And judging by your name...so would you... :)

Hi Niles....yes the whole thing is absurd. And to make matters worse the local yokels at the Sheriff's Office are now investigating.
Busting innocent people...especially kids...and forcing them into the criminal justice system...is crazy and REALLY criminal.
I also take two other things away from this debacle.
One...I now understand why he consumes 12,000 calories a day. Blame the munchies.
And two...cell phones are the biggest invasion of privacy ever invented... :)