The Puffy Pig and the House of Trough 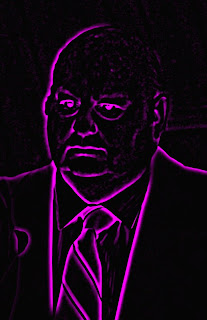 He was one the most grotesque figures ever to appear on Canadian TV. A monstrous tub of jiggling lard who could never hide his Con bias...even though he was supposed to be a journalist.

Or stop squealing for a Senate seat.

Now Mike Duffy has kicked up his disgusting act a notch by pretending to be a sleazy pornographer.

“I was disappointed to see that our dynamic young Premier in Prince Edward Island, Robert Ghiz, has climbed into bed with the Premier of Newfoundland and Labrador and honorable Senators know what a grotesque scene that is...’’

“Do honorable Senators know what happens when two politicians climb into bed together? One of them comes out on top and I am afraid that when one is in bed with Danny Williams, he will come out on top and I would hate to see where that will leave P.E.I. in the end.”

You mean a scene even MORE grotesque than the image of Mike Duffy in bed with Stephen Harper .... licking his ass for a Senate seat?

Or getting humped like a waterbed while wearing an Anne of Green Gables wig....for FOUR BBQ chickens?

As for the vulgar gay angle.... brother Matt finds it icky.

But I can't even THINK about it...or I might never get it up again. Or have horrible nightmares.

But seriously though... now that the Purple Puffy is loose in the House of Trough.

For the sake of decency.

Isn't it time we abolished the Senate?

UPDATE: The Purple Puffer retracts himself.

So when is Stephen Harper going to retract himself for foisting this foulness upon us?

Or getting humped like a waterbed while wearing an Anne of Green Gables wig....for FOUR BBQ chickens.