When I heard about Mike Duffy's , pornographic fantasy I thought it was the most disgusting speech ever made in a Canadian Parliament.

But then I decided to read the whole address and holy tubby it was even MORE revolting.

I am delighted by this opportunity to serve Canadians, and I want to thank Prime Minister Stephen Harper for making the call. It is not a position I sought, but it is a challenge that I accept with enthusiasm.

I mention these battles because through them all I learned one cannot be a successful leader without sound political judgment and the courage to make tough decisions despite determined opposition.

I am here to tell honourable senators today — this is where the hard part begins — Stephen Harper has both that judgment and that courage.

Ugh. Vomit. Who knew eh? That he didn't seek, beg, and SQUEAL for his senate seat. Or that he was a slavish Stephen Harper supporter.

I guess that explains EVERYTHING.

But what explains this I wonder? 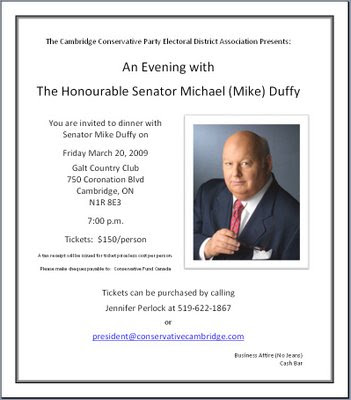 At $150 a plate? What are they serving the porker... lobster and caviar?

Snort. Gobble. You don't think he sees his Senate seat as a way to roll or bounce or eat his way to higher office do you?

And what happened to plain old turkey? 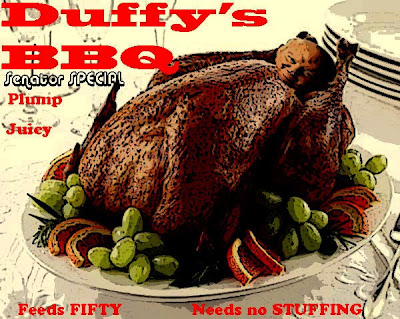 What's a matter eh? Not good enough for a SENATOR....or the future Mr Potato Head Premier of P.E.I ? *Shudder* Or the ass end of the bird....or the legend in his own mind?

But never mind ....now all I want to know is this:

At the end of his cross-Canada dinner tour what will they send to pick him up?

A stretch limo with sixteen tires?

Or a dump truck? 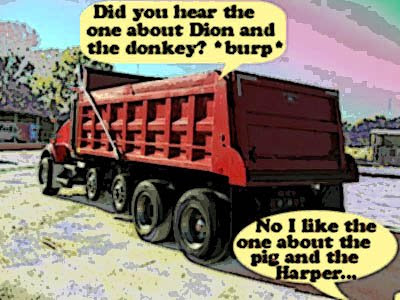 You know I always thought that the Cons are swine.

Good one. Righ on.

ROTFLMAO! What a delish post! I'm sure he is delighted to be away from his wife too. Once heard them argue in a 'beauty salon', it was downright piggy mean with the usual entitlements thrown in. Ugh is right.

I'm annoyed by the "Honourable Senator Mike Duffy" on the invitation. He's not entitled to call himself that. He can be called 'the honorable' Senator when in the chamber but outside he's plain old Senator Mike Duffy. To be fair (though it pains me), this may be the fault of the sponsoring association rather than him or his office!

Another "pigout", hey?
But you get to take some home in a doggy bag for your fellow MPs in the Liberal caucus; sort of a 2 for 1 deal .

Hi anonymous...well thank you too.I always thought that Duffy's long campaign for a Senate seat was one of the longest running jokes in Canada. To see him actually get one was shocking beyond belief. I think this is going to be the beginning of a beautiful relationship... :)

Hi scotrock...I of course object to the word honorable attached to Mike Duffy under any conditions. I might be a bit cynical, and I'm no supporter of the Senate, but his maiden speech was so vulgar it really offended me.
If we're going to appoint Canadians to that useless body there must be at least a million people in this country more deserving than him...

Hi Oemissions...I have a friend who has a friend in the media who said he once saw Duffy eat TWO whole BBQ chickens in ONE sitting.
So I rest my case... :)