The other day Paul Wells was on a CBC panel, and they were discussing who might replace Stephen Harper, when that happy day finally arrives.

And Wells said something that shocked me. He reminded viewers that the Conservative Party is far to the right of the government. So don't think someone like say Jim Prentice.

And ever since my few surviving brain cells have been colliding with each other like klown cars. Screaming WHAT ????? Not that little PRICK !!!!!! Not that wretched coward.

The Conservatives are repeating allegations that a B.C. journalist doctored a tape of Stephen Harper talking about the Cadman affair – but only in places where they are protected from lawsuits.

MP Pierre Poilievre, the parliamentary secretary to the Prime Minister, slipped out of the Commons by the back door Friday morning rather than take up the NDP's challenge that he repeat the claims outside the chamber.

The coward who knows the slandered journalist can't afford to defend himself. And that dead men don't talk.

I must admit the whole thing makes me want to vomit. Even though there is a silver lining...or a tin foil one.

What WOULD we say I wonder if Pee Wee Poilievre actually decided to run for leader of the ReformCon Party ?

And the answer it seems to me is OBVIOUS. 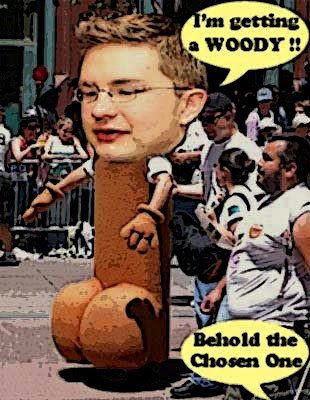 Because we can't have enough crazy far-right pricks in the Conservative Party can we?

Do you think we could call him Pee Wee Palin...or the Rolling Rubber...or just Balls on Wheels?

Let's be fair: no matter how wingnutty a Con leadership race gets, Poilievre would figure to be a long-shot. I'd fully expect Breitkreuz to take his supporters over to Anders in order to keep someone from the West in charge.

I sort of think there could be a chance for him. Remember that he's originally from Calgary and was a parachute candidate the first time round.

Westerners--bless 'em--will stick together like cows in the field during a thunderstorm.

Hi Jurist...well that's what I thought until I heard Wells. Who BTW said also said that he didn't expect Harper to leave anytime soon. So maybe in a few years as the party base becomes even more alienated from the Harperites...Pee Wee will be seen as the Great Con Hope. I'm hoping anyway... :)

Hi Torontonian...I didn't know he was originally from Calgary. Well that explains everything doesn't it?
Seriously though having a base in the east and the west could help him.
But does that mean I might someday see Pee Wee in a cowboy hat?
Oh boy some things are worth waiting for.... :)