The Pope and the Hurricane Denier 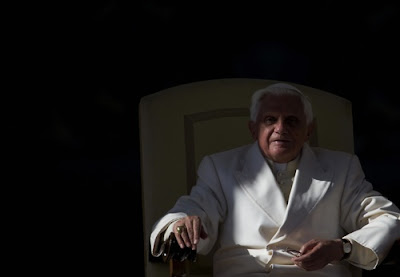 Well I have to admit the Godfather of the Vatican sure has an excellent sense of timing. And a horse's head way of demanding RESPECT. Last week he was making an offer you can't refuse to a Holocaust denier, sexist pig and violent homophobe.

Now he's kissing the , ,ass of a crazy hurricane denier, who believes that Katrina was God's punishment.

He wrote in a parish newsletter that the death and destruction caused by the hurricane in New Orleans was divine retribution for the city's tolerance of homosexuals and permissive sexual attitudes.

The future bishop said he was glad that Katrina destroyed not only nightclubs and brothels in New Orleans, but also five of the city's abortion clinics.

Even though about 2,000 people were killed, tens of thousands...including many good Catholics... had their lives shattered. And the flooding miraculously spared the French Quarter....Bacchanalia's ground zero.

Gawd. I've run out of words to describe this twisted old Nazi Pope and his mob of bigot Bishops.

I guess all that remains to be determined is whether he's suffering from moral decay, Alzheimer's.......or the last stages of SYPHILIS.

Or all of the above.

And all I can say to the decent Catholics out there is you have my deepest sympathy. And if you can't send him a horse's head ....or in his case a horse's ass....to encourage him to change his Satanic ways. Or leave the Vatican in a hurry.

Do what I do every time I hear The Holy Godfather open his perverted piehole.

And press this emergency button.

I don't know if it will work for you. Unless you sacrifice at least six bananas to the Monkey God.

Sounds to me as though this odious Louisiana cleric is a Katrina cheerleader, claiming that its purpose was ideologically designed.

What a venomous nest of vipers the Vatican is.

dBo nailed it as did you Simon.

I went to a progressive Catholic school followed by one that was at least open-minded (I was allowed to present my Dr. Morgentaler is a hero presentation). I also grew up next to a seminary where many young missionaries were guests in our home. Many of the coolest ones went on to become social advocates and even communist political agitators. Go figure. They were my heroes growing up.

I've been an atheist for a long while but I do have fond memories of having been privileged to have known a different breed of Catholics. The current crowd that gets attention including the rat pope are such a loathsome bunch that it's an embarrassment to even admit to ever being a Catholic.

hi deBeauxOs...yes it is isn't it? I always thought this pope was rotten, but in the last year he's proved himself to be worse than I ever thought...

Hi Beijing...yes that's why I always try to acknowledge that the Pope doesn't speak for all Catholics...certainly not the ones I know. I grew up with Catholics cheering for their soccer team (Glasgow Celtic)instead of the Protestant one Rangers. I got stabbed once for defending one of them from a group of Ranger hooligans ...and now I live with one. So I so I dare anyone to call me anti-Catholic :)
But I do hate that bigot Pope...

Gosh Beijing...I just had another thought. Considering I suffered and bled to defend the Popish faith...do you think I could apply to be SAINTED? ;)