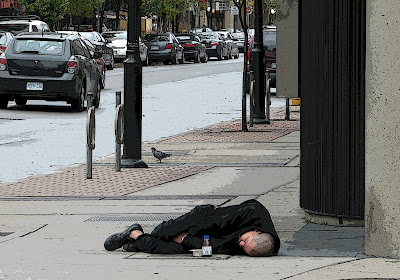 (Click to enlarge)
I took this picture in downtown Toronto the other day, near the St Lawrence Market. But I could have taken it just about anywhere, because the city is full of miserable, suffering, lonely, homeless people like this poor Canadian.

A lot of people are to blame for this crime against humanity. But if I had to blame the person MOST responsible I'd blame Mike Harris. The thuggish former Con Premier of Ontario who Stephen Harper is accused of plagiarizing.

Stephen Harper can deny the obvious plagiarism. He's a liar as well as a cowardly tool and a fraud. But what he can't deny is that Mike Harris and himself share exactly the SAME approach and the same evil and failed philosophy. That's the REAL crime.

They both came to power with one aim in mind. To destroy the power of government and turn society into a neocon jungle.To do that they made tax cuts their mantra. Or sent people small amounts of money in the mail. Until there was no money in government coffers. And they could use that as an excuse to cut goverment programs they didn't like.

Stephen Harper and his Finance Minister ....former Harris Con Jim Flaherty.... have taken us to the edge of a deficit, leaving us dangerously vulnerable as a brutal recession closes in.

Mike Harris left the province BURIED in debt. And the city of Toronto just a shadow of its former self. A city full of misery, despair, crime-ridden neighbourhoods, and crumbling infrastructure. 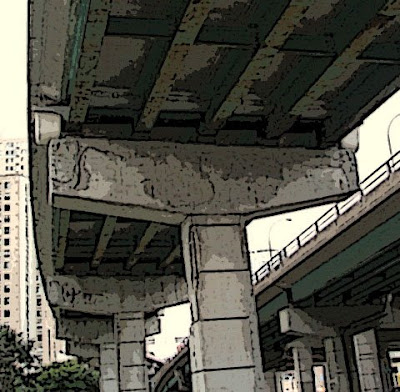 If Stephen Harper has his way the same fate awaits Canada. To elect a dangerous neocon ideologue like Harper Harris at a time like this, is not just RISKY beyond belief. Like playing Russian roulette with four bullets in the chamber. It's absolute MADNESS.

That's the message Canadians NEED to hear. Harper as a good economic manager and tax cutter isn't just a Big Con Lie. It's a crazy illusion.

With deficits looming, perhaps catastrophically so, not to mention other mayhem, the era of tax cuts is over, no matter what the parties promise, either here or in the U.S. Furthermore, the utopian right-wing presumption that private action alone solves everything is also over – the U.S. bailout of the failed money creed putting paid to that. The fact is that we will now need wise government action to guide us through the shoals ahead.

The Harper government doesn’t believe in public action, wise or not. That’s a problem, but we may not know how much of a problem until after the election when government action is increasingly called for, but the Harper government, virtually alone in the world, is ideologically opposed to it.

It's probably too late for that poor man near the St Lawrence Market.

Or for this suffering Canadian. 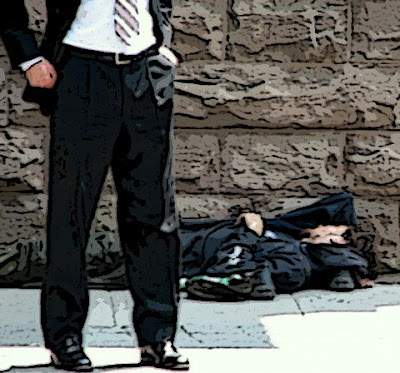 But it's still not too late to save Canada from being turned into a heartless Con jungle.

The message to all Canadians in these last ten days must be......if you love our beautiful country.

Sometimes I feel like too many people are giving up and just hoping that Harper is kept to a minority. I just don't get it.

A similar attitude developed among the US progressive left during the 2004 presidential campaign. People were not inspired by Kerry and Rove managed to destroy his character much like Harper has done with Dion. The thinking among US friends was to grin and bear the fact that they were stuck with another four years of Bush and to concentrate on grooming an ideal candidate to take back the White House.

In the meantime, look at how many people suffered -- Iraq, Hurricaine Katrina, Housing collapse, Banking collapse, etc. The country is in shambles and Obama's "progressiveness" is further to the right of Bill Clinton's.

The Strausian neo-con plan is about destroying and making it near impossible to recreate what we lost. It is about moving the goal posts so far to the right, that a Mulroney type government will be considered very liberal. Harper even said it himself, he wants conservatism to be the new normal in Canada.

The Liberals and NDP have to stop attacking each other and fighting for opposition leadership. Maybe that benefits their parties but it is a total abandonment of the Canadian people.

Hi Beijing York !! Well I'm certainly not giving up yet, because the thought of even another Harper minority government makes me ill. However I've also got something to dream about. Harper wins a minority, but the Liberals and the NDP end up with more seats together than he has. Then with the support of the Bloc they bring down the Cons and go to to the GG to say they will form a coalition. Which would banish the foul Cons, almost surely result in Harper's departure to the Fraser Institute, or hopefully Paraguay.
And if the Libs and the NDP could govern well together it might hasten the day the left unites. And we could all live happily ever after.
*Sigh* Did I tell you I have an amazing capacity for self delusion?
My friends say I live in the clouds. But I love flying eh? :)