The Election and the Midnight Hour 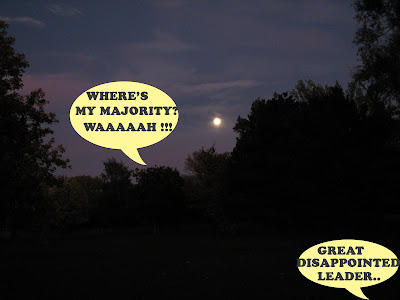 I don't know. Maybe it was the full moon. Or the booze. Or the paint thinner.

But by the time the election ended last night I was feeling rather cheerful.

One...because despite the best efforts of the divided left to take the bullet...gimme gimme no no Me Me !!!! ...we actually DODGED it. Whew !!

And two because I know that as bad as I feel about another minority government, Stephen Harper feels even WORSE. If he wasn't howling at the moon last night, he was probably in his bunker rolling around on the floor biting the carpet. Or shitting on the Quebec flag.

Because for Stephen Harper having a minority instead of a majority is like humping an inflatable doll instead of the real thing. He wanted to screw Canada and our values beyond recognition. And now he CAN'T. 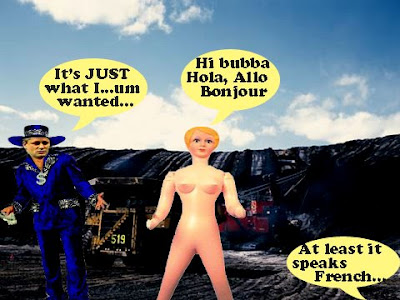 And the BEST thing is that he knows it's all HIS fault. He was so close to majority he could lick it. He'll NEVER get a better chance. But HE blew it. So much for Not So Great Leader. Or can we just call him Great Strategic Dumbo?

As for everything else....what can you say about an election where English Canadians have to thank the Quebec separatists for saving Canada and its values? Er....um...merci?

Or one where Jack Layton after telling us he was running for Prime Minister ends up declaring a moral victory in a club not far from where I live called ....The Guvernment. Tricky eh?

Or one that ended with Stephane Dion poking his head out of the smouldering ruins of his disastrous campaign, telling us that he's honoured to stick around as The Opposition Leader .....apparently FOREVER.

When everyone knows that his grateful party is planning to send him to one of his favourite places. 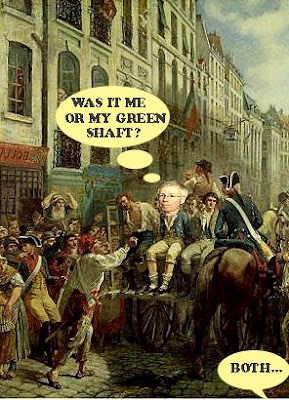 Which leaves me wondering where can I get my money back for this rotten show?

And aren't we LUCKY? And did the divided centre-left learn something from this close encounter with The Abyss.... or the Midnight Hour?

Because if it didn't.

The next time will be WORSE...

P.S. After this sorry episode any English Canadians who say anything bad about the Great Quebec Nation should be sentenced to six months in Ste Tite.

I love you Simon. You cheered me up immensely and I needed it. The image of Harper shitting on the Quebec flag had me howling.

Merci beaucoup Gilles! Wow, a separatist who cares more about Canada than the rest of us. How is that for ironic. I bet you he supports Amnesty International :-) You can be a nationalist and still recognize when something is terribly wrong on the human rights front elsewhere. In this case, elsewhere is here en Canada.

Oh, speaking of human rights, seems like all those reforms to the Elections Canada Act had a lovely impact on this election. Lots of people disenfranchised because of lack of ID. Sheesh, it seems to me that a number of poverty groups and Aboriginal groups pointed this out when the legislation was being debated and still these stupid changes were passed unanimously by the HoC. What a bunch of dupes.

I hope the opposition has learned its lesson. The only way to handle Harper is to piss him off and let him show the world what a bullying, incompetent prick he is. You don't play nice with bullies. Gilles learned his lesson this election. Hope Jack and Stephan do too.

Hi Beijing York !! I'm glad I was able to cheer you up. He may have stolen our country, but he's NEVER going to take away our sense of humour...or our determination to DEFEAT him.
As for Elections Canada, although I thought they did a great job, they probably could have reminded people that they would need ID. So more poor and homeless Canadians could have let Harper know what they feel about him.
We clearly need to do more to register people.
As for the way to handle Harper well I guess you know how I feel.:) I believe in a civilized, decent Parliament, where the politics of personal destruction have no place.
But Harper is such a foul bully he deserves to be treated like one...

Hi Canadian Hegemon...Ooops that's just what I told Woozie. But seriously what makes me so proud of our French Nation is that even though they were shamelessly bribed by Harper. They not only turned their backs on him, they did it for culture and kids.For the very best and most CANADIAN of reasons.
I'd like to pass on your thanks and mine to every Quebecois. But since I've got one lying on the couch in the living room, I'll just pass them on to him... :)