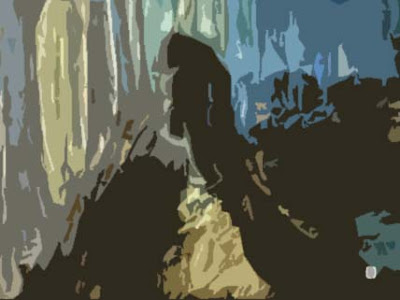 I fell in love with the native people of the Great White North long before I arrived in Canada. When I was a kid in Scotland I "borrowed" a book on native legends from the village library. I'd read it under the sheets at night, with the aid of a flashlight, and the stories and the illustrations filled me with wonder.

I knew they came from a rich and amazing culture. And when I arrived in Canada...after recovering from the shock of finding no natives in Montreal... I found it all to be true and their culture even more AWESOME than I thought.

And the only thing that disappointed and shocked me was to see how desperately poor they were, and discover how badly they had been treated. Even though we owe them so much.

So when I heard that Dick Pound had called natives "savages" it made me shudder. But I figured anyone can make a stupid remark and he should just apologize for being so IGNORANT. And of course resign his position at McGill University, because I went there, and I don't want my degree DEGRADED.

It's bad enough that Dr Roy went there as well.

But what really disgusted me was Margaret Wente's column. Not just because her facts are all wrong. But because of the moral dimension.

Why would ANY decent person try to put down the culture of some of the poorest and most vulnerable people in this country? Instead of trying to boost their self esteem, help them to be proud of who they are, help them to escape from poverty.

Margaret Wente could have defended Pound without trying to defend the indefensible. But she didn't. Which makes her no better in my book than this wretched racist.

Can you believe that deranged dwarf and her equally pathetic and racist sidekick Small Dead Chihuahuas? How miserable and morally DEFICIENT can you get?

As for Margaret Wente all I can say is.... until she apologizes or gets her ass FIRED. Or is reassigned to the obit section...where she can write about dead rich people....you know the people she wants to be. And their expensive shoes.

Or even better goes back to some Republican place in Redneck Land U.S.A. where she really belongs.

I would boycott the Con Globe.

Because you never know what nasty thing could bite you next... 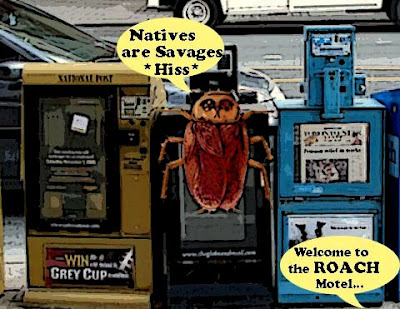 Interesting post. As an anthropologist, I cannot agree with anybody depicting the aboriginal people as "savages". With their greed and moral turpitude (and their hypocritical religion), western Europeans did a lot of damage and bloodshed when they came here, totally oblivious were they of the culture of the people they met. The misery they are in is a direct product of our colonization of the land, and the way we treated them afterwards (and still are. Look at Desjardins' documentary, Le peuple oublié).

The least we should do now is help the native people of this land instead of despising them.

I don't read the Globe, being a crazy french canadian, but from what I heard, they also like to spit on french canadians (most famously that idiot Jane Wong when she wrote that the Dawson College tragedy has been caused by Quebec's language law).

Keep up the good work!

I've already stopped reading the Globe and Mail. From reading their editorials since Harper was elected, the best I can hope from them is to teach me to be a really good cocksucker as if I didn't know already.

And that Wente thing, good gawd. That's a major case against prescription drugs if I ever saw one.

Hi enkidu's palace !! yeah my point is that we should stop pitting one group of Canadians against another and just celebrate who we are. Because this country is big enough for all of us. And we're all BEAUTIFUL.
As for the Globe my French Canadian brother, don't worry you're not missing ANYTHING. ... :)

Hi Bruce !! Yeah I don't blame you. I can't understand why in a centre-left country that rag just keeps getting more and more right-wing.
As for teaching you to....um...um...you know... thank goodness that comes NATURAL... :)