The Capitalist Pigs and the Golden Bull 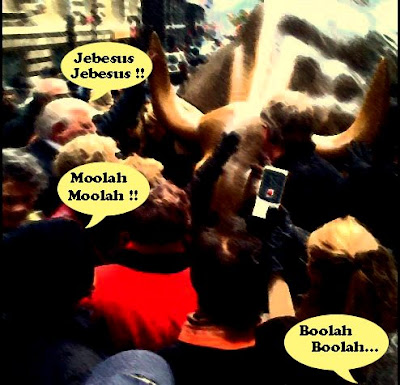 As if we needed any more evidence that the Christianists in the United States have gone off the deep end. You know THE ABYSS.

First they call Obama the Anti-Christ. Now they're kissing the ass of the Golden Bull...and praying for money.

When of course of course if they want REAL relief or the next best thing to The Rapture, they should be banging on the doors of the Big Capitalist Pigs and demanding their money back.

There’s also bizarre stuff going on with regard to the mortgage market. I thought that the whole point of the federal takeover of Fannie Mae and Freddie Mac, the lending agencies, was to remove fears about their solvency and thereby lower mortgage rates. But top officials have made a point of denying that Fannie and Freddie debt is backed by the “full faith and credit” of the U.S. government — and as a result, markets are still treating the agencies’ debt as a risky asset, driving mortgage rates up at a time when they should be going down.

What’s happening, I suspect, is that the Bush administration’s anti-government ideology still stands in the way of effective action. Events have forced Mr. Paulson into a partial nationalization of the financial system — but he refuses to use the power that comes with ownership.

Hey, when the winner of the Nobel prize for Economics speaks people should really listen.

Because you won't get ANYWHERE waiting for these piggies to do the right thing. The only language they speak is greed. You know...ME ME OINK OINK.

So you have to TELL them what to do, and slap them, or JAIL them if they don't.

And it's one the people have to WIN, or one day there will either be a REVOLUTION.

Or we will find ourselves in a very dark period.

Because in the Times of the Locust the moneybags who pull the levers of power....and their lackeys and servants.... have a tendency to play HARD BALL.

As poor old Howard found out....

And then Howard says: "I have seen the face of God."

And Mr Big says: "You just might be right Mr Beale."

Golly. Hang on to your toques hosers. Or your wallets. Or your FREEDOMS. Eh?

Because when you fuck with the Primal Forces of Nature.