The Lynching of Stephane Dion

As a Quebecer I've never been a big fan of Stephane Dion. He has a tendency to talk down to his own people. And like most Québécois I could never forgive him for brandishing partition like a weapon in the aftermath of the referendum.

When half the province was bitterly disappointed, and the other half who were also in many cases their relatives and their friends, just wanted to move on. And heal the wounds. Instead of having someone rub salt into them.

And as a Canadian I never thought much of his political skills either. He's not just a lousy politician who can't really connect with ordinary people, he also thinks he's ALWAYS right. As someone said the other day Stephane can never just win most of an argument. He has to win it a hundred percent. Even when he's barking up the wrong tree.

But having said that, I must admit that I'm disappointed and disgusted at the way he is being forced to leave.

Because he's a smart, thoroughly decent , kind, gentle man and a good Canadian. And I hate the way he's been mocked and bullied. And how quickly the knives have come out for him. 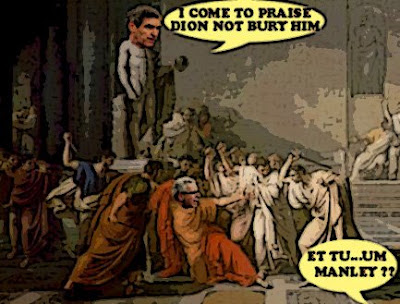 And who are these whispering conspirators and anonymous sources? Never mind the scummy Joe Volpe. But Frank McKenna and John Manley? Is this the Con Lib Party or what? And do any of the wouldbe successors think they can connect with Canadians better than Dion could? Give me a break.

As a number of Liberal bloggers have pointed out the woes of the Liberal Party can't just be solved by knifing Dion in the back and burying him. The party needs to break the stranglehold of the Bay Street Boys in the backrooms. It needs to build up its grassroots, and connect with ordinary Canadians.

It has to come up with a vision and the big programs that can excite and unite Canadians..like it once did. And above all it needs to remain a centre-left party, because most Canadians are centre-left. And they embrace the power of government to make lives better for ALL of us. They don't reject it like the Bush Cons do.

So when I see Dion resign on Monday, as he is expected to do, I wouldn't be surprised if I get a bit choked up. I'm not ashamed to admit I have grown rather fond of the wonky professor. Because decency and idealism still have a place in Canadian politics as far as I'm concerned. And although he isn't a political animal, and never really understood the ugly game of modern politics, I know he tried his best. His very very best.

He COULD have been a great Prime Minister. He deserved to be treated better by Canadians AND his party.

Maybe it's time we take that ingenious pink t-shirt campaign to the freaking politicians.

I met David Shepherd's father while in Nova Scotia and thanked him for raising such a fantastic young person. A true example of what Canadians really are about.

I dare Ignatieff, Rae, Volpe et all to don a pink t-shirt to show us that they truly are representative of Canadian values. I dare the entire NDP, Bloc and Liberal caucuses to put on a pink t-shirt and walk into the HoC to show solidarity against Harper.

I alternate between feeling furious and feeling sad.

I've bitten more heads off visitors to my blog this week than in my previous 4 1/2 years of blogging. Of course, some of them really deserved it. (IMHO).

Hi Beijing York...It might be a good idea...but I wonder if they would get it like those GREAT high school kids do.And how fantastic that you got to meet David Shepherd's father. He must be really proud of his son.
Just like Canadians should be disgusted at Harper and his Cons for bringing their Republikan bullying streak into our government. I understand that another decent Canadian Joe Clark was also mocked and bullied like Dion. But surely it couldn't have been so bad. Because it's the LOWEST thing I've ever seen...

Hi Ann...that's because you're a decent person, and every decent Canadian should be disgusted at the way Dion has been treated.
Although I must say I'm SHOCKED that you have been biting heads off...even though they ALL deserve it.;)