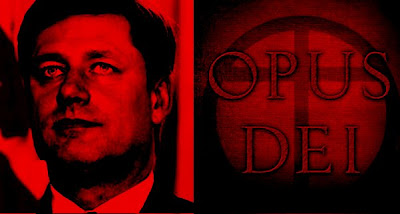 A while back I wrote a post about a Conservative candidate in Quebec who was a member of the ultra right-wing Catholic group Opus Dei.

The Reform RepubliCons reacted with howls of outrage. Claiming they didn't know about her background. And accusing those who raised the matter of discriminating against religious minorities.

But now it turns out there is at least one other member of Opus Dei in Conservative ranks. And she's not just really powerful, she's also a member of their national candidate selection committee.

Which makes me wonder how the Cons didn't know that Nicole Charbonneau Barron was a member of that order. And did it hurt or HELP her candidacy?

Now look I don't care what a person worships in the privacy of their own home or church or whatever. A Big Daddy in the Sky.

Or a pig on a stick. 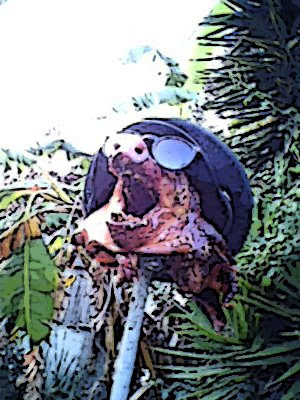 But do Canadians really believe that if a party stuffed like a pork roast with religious fanatics, old Reformers, and disgusting homophobes, gets a majority....it WON'T lead to an all out assault on gay and women's rights?

Like no abortion after three months, no medicare funding, and no more gay marriage...just civil unions.Or worse.

And if Canadians really do believe that, does that make them guilty of dreaming in colour as we say in Quebec?

The lights are going out in Canada.

And The Monster is stirring...
Posted by Simon at 5:30 PM

Partisan politics is all about forbidding candidates to publicly stray from the party line. This is why politicians are so disingenuous and why we never have any meaningful debate, particularly during election campaigns. For if anyone running for office actually expresses a unique opinion, the party swoops in and silences them.

I guess you take your political cues from fiction (Da Vinci Code). Do some reading on what Opus Dei REALLY is. http://www.opusdei.us/sec.php?s=8

Hi noamzs...well certainly the Conservatives have taken that to new highs. Or should that be low? The way Harper has turned even his ministers into sheep is extremely disturbing.

Hi Glen...actually I don't. I thought the movie was absurd and the scary albino ridiculous. Nor did I mention anything in this latest post about Opus Dei...and it's ties to right-wing regimes. I really don't care. What I'm just pointing out is that if you have a party full of people who want to ban abortion or turn the clock back on gay rights, you will get what you vote for. A religious person has the democratic right to support whatever position they want to. But we have a right to know what the Cons stand for...because it's NOT the official position of their party. OK?

That pig on a stick looks really grose.

I think you can promote any message in a more effective way, right, Simon?

Hi MWD ...I guess you're right. I'm sorry if I grossed you out. I was looking for the pig from Lord of the Flies, but my friends were literally tugging on my jersey to go and play soccer with them, so when I saw the picture I just grabbed it. I'll try to do better next time...

What I absolutely can't understand how this monster seems to Hoodwink French Canadians generally he represents the full scale opposite all what Quebecers generally want..and stand for.
How???
And if he gets majority.. the seducing is over…
Wake up .

I don't give a rat's arse about the Da Vinci Code and don't read or watch such potboiler crap, but I do care deeply about Opus Dei's role in supporting and promoting vicious fascist regimes, which were of course also horrifically homophobic - remember Lorca!

I didn't like the pig pic either, just because I think it is degrading to an actual dead pig, not to Harper, Franco, Pinochet or Videla...

Better Mussolini hanging from the meathook, though he wasn't actually very religious, as Catholic-type fascists go.

Hi dame...the only Quebecois Harper fools are the ones from the regions where the whole thing is complicated as part of the rural/urban split....and people are more conservative. But Montreal is still an anti-Harper bastion. I'm also glad to report that Harper has been losing a few feathers in Quebec with his cultural cuts. So I'm hoping :)

Hi Lagatta....actually I do care about Opus Dei as a political beast. And if you check my sidebar under popular posts I have my homage to Lorca.
And I once wrote a post about Videla and his fascists...and the priests who used to bless the army/navy criminals who threw people out of planes.
I just wanted to point out that for a party that claims to be in the centre there are an awful number of right-wing socons.
But you're right about the pig. *sigh* I'm a huge animal lover and whoever posed that picture must be a little twisted. So sorry...