The Nanos Numbers and the Divided Left 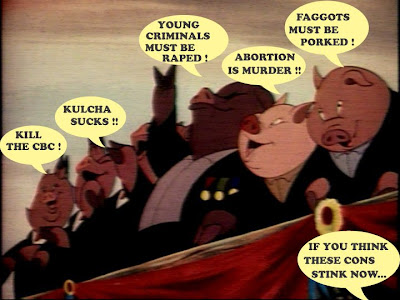 Uh oh. The latest Nanos poll is in and it's not so good.

It looks as if the RepubliCons are on their way to a massive majority.

So I'm glad to see that I'm not the only one calling for the left to stop fighting itself.

Like I'm going to do. Because the times ARE extraordinary. The days of denial are over.

And the writing is on the wall.

If these RepubliCons can put ideology before Canadian culture....or Canadian lives.

How long do you think they will wait before they criminalize abortion?

Or destroy the Canada we love? Answer: Not long.

The centre-left should have seen it coming. And it's awfully late in the game.

But if we play our cards right...and put Canada before our political partisanship. We can still beat these Cons...

No seriously somebody do SOMETHING.

No sense in crying for help. You gotta pair of feet? You gotta hand to knock on doors? Can you speak up? If the answer is yes to any of these questions, then go volunteer for a candidate in your riding.

I don't care who. If you're going to vote 'strategically', then just go to the candidate you think has a chance to win.

There's absolutely no sense in bellyaching about the inevitable. Why not do something to stem the momentum?

Get out and raise your voice. If your feet aren't worn out by the time election season is over, and you haven't done anything other than complain online, then what's the point?

We need electoral reform, not strategic voting. It's outrageous that a party will get a majority with just 40% or so of the vote, especially when just some 60-70% of people will actually vote. So really, it's like a quarter or so of the voting public that can grant a party a majority government. Neither the Cons or the Libs will initiate electoral reform as the current system benefits them. *Sigh*
P.S.-As a long time lurker, I know you comment on gay issues around the world...what do you think of this ?

Hi Troy...yeah you're right. It's no good just sitting there and bitching. But I just want reality to set in so we can do what we have to do. I'm not a defeatist.And even if Harper gets a majority I will fight him and his Cons FOREVER.
Even if I still bitch... :)

Hi adam !! yeah you're right proportional representation is the solution. But because we don't have it I'm willing to explore any temporary solution that can prevent
the monster from getting his majority. As for what happened in Bosnia it disgusts me. You would think that people who had suffered so much would know better. I normally try to cover as many of those gay stories as possible. And some of my gay friends are wondering why I am writing so much about politics. What I tell them is that right now fighting Harper and his thugs amounts to the same thing.Because I'm fighting to keep the tolerant Canada I love from being brutalized by these savages, who would strip gay people and women and other Canadians of their most basic human rights. But that my commitment to the struggle against bullying and homophobia remains as strong as ever. And that the day Harper is defeated I intend to run naked down Ste Catherine Street. And that usually satisfies them... ;)