How to Avoid a Harper Majority 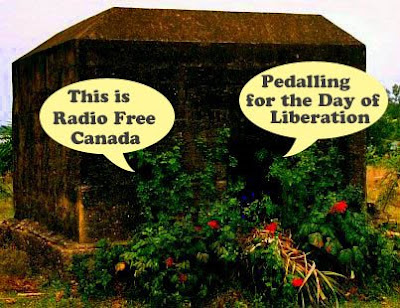 By the time you read this I will have moved into my new bunker in a secret location somewhere in Canada.

You see it suddenly hit me like a taser. We're only about 38 days from a possible Stephen Harper majority and I can't be TOO prepared. In the past I've been known to call Great Pig Leader a MONSTER....and I always will. Oink. Oink. So I can only imagine what might happen to me if the RepubliCons seize Total Power.

I can see myself locked up at some sinister Homosexuality Disorder and Discipline Centre run by Stockwell Day. Right next to the Mother Theresa "Rehabilitation" Camp for women who have had an abortion ....and their supporters. And the Jesus Hates You Camp for atheists.

Where between bouts of electric shock treatment to my private parts, I'll be forced to pretend I'm straight, memorize Great Pappy Porker's boring speeches, take Jason Kenney or John Baird to the Purity Ball, and of course, PRAY a lot.

In Con Canada that'll be COMPULSORY. Three times a day....or else.

Which is why I am praying right now that Dana's excellent plan succeeds.

We really do have only one chance to eliminate Harper from the playing board.

Exactly. Just like they do in other civilized countries. But for some reason our rabidly partisan friends never even talk about.

And if we can't get the left to unite, or form a coalition, can't we at least agree to share riding polling numbers a few days before the election? So we can vote strategically and at least deny the Cons a majority. Please? Isn't Canada worth it ? WTF ?

Anyway, I gotta signoff. I'm running low on power. Sébastien has been pedalling the generator for fifteen minutes and he's chuffed.

But before I go I just want to say I'm kidding around tonight, because I need to cheer myself up. But a Harper majority would NOT be a joke. It would be like a knife through the heart of our beautiful country. And we CAN'T let it happen.

So if our side ever stops fighting itself.

And needs an attack dog.

To bite the foul Cons in the ass.

Or help BOUNCE them from power.

Have a great weekend everyone!!

Do you and Sébastien have room in your bunker for a gay friendly Maritimer? Call me..

Hi Omar Absolutely. You and any other members of the progressive resistance. But only if you can pedal. If this country goes down the Con toilet I'm going to need a lot of power because I'm going to have a lot to say!!! ;)
Actually, I'm a bit guilty about this post. As I explained I needed to cheer myself up...but I ended up burying what Dana at the Galloping Beaver had to say.And that's the really important part.
Because we need to confront the common enemy together. Bounce Bounce...

Simon - I like the bunker idea but respectfully suggest that PMSH be the one put into a bunker. It would be much more fiscally efficient and morally effective, especially if the door became jammed shut.

I hate Harper, but I'm not sure I agree with strategic voting. Last time it was done with any effect, it cost the Conservatives only 2 seats, and the NDP 13 seats. Yikes. And as an NDP supporter, I'm not sure I could put an X down beside Dion.

If only Bob Rae had gotten in.

You know how, when you play euchre, if nobody wants to make it trump because everyone has shitty cards, you all just fold and reshuffle? Can't we all take to the streets and demand a do-over? Every party has to come up with a better party leader, and we'll start all over. Personally I'd vote liberal if the dealer turned up a Trudeau or Chretien, but I have to pass on Dion.

Hi Woman at mile 0 !! Thanks a lot and BTW I really like your blog.
And you the puppy was cute and a pretty good bouncer. :)

Hi BriBri!! Thanks for the link...I must admit I thought Palin was a lot of things...a barracuda, a pitbull, a wingnut...but a cheeseburger?
I LOVE it !!! :)

Hi Sassy !!! No I'm afraid a bunker is too good and too cozy for him. I won't be satisfied until he's in a cage on some desert island, covered in maple syrup, and surrounded by millions of hungry ants... ;)

Hi Sage !!! I realize that strategic voting is a bit risky, because you'd have to have the right info before you make your choice.And I must make it clear right off the bat that I'm a dreamer not a practical person. :)
But seeing two progressive parties split the vote and allow a Con candidate to win is too horrible to think about. So I'm desperate.
I may think Dion, although a fairly decent guy, is the most calamitous politician EVAH.
But I'm for the Anyone But Harper Party...so I'll vote for ANYONE...

One more thing Sage...I think that when this election is over we really need to look at the quality of ALL our leaders. And ask ourselves why are they so mediocre, and what can we do to bring bold ideas, a little more excitement, and more young people into the political process.
Dreaming again? :)