Stephen Harper and the Palin Factor 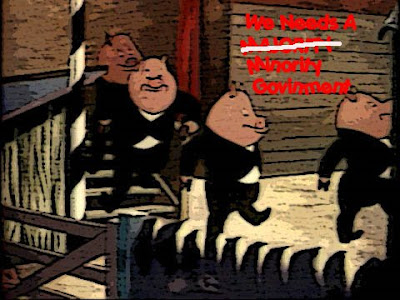 As I watched Stephen Harper and his porkers march off to the Governor General's house to declare an election.

And heard Great Pig Leader squeal that he expects it will just lead to another minority government.

I really had to laugh. Why do you have such big teeth Granny? Why do RepubliCons always think people are fools? Why does this lying double talk sound so familiar?

And then I saw this disgusting quote:

"As you all know once you become a dad, that's pretty central to your character and your life. So, obviously, that's part of what we want to communicate to people."

Asked if he thought Mr. Dion — who has an adopted daughter — was a family man too, Mr. Harper said he would "presume he's a family man as well."

And it suddenly became so CLEAR.

Stephen Harper may be George Bush's foul little stooge...for polishing the Chimp's ass with his tongue...and disgracing his country abroad. But the person he reminds me of these days is Sarah "The Barracuda" Palin.

The Barracuda believes that being a hockey mum makes her a better leader. And so does Stephen "hockey dad" Harper. Vomit. Palin is a climate change denier and a whore for Big Oil. And so is Great Pig Leader. That's why he hates the carbon tax. That's why he killed Kyoto.

The redneck from Alaska claims to be for good economic governance. But she ran her little rube town into the ground with her reckless spending. Just like Staphen Harper has done to Canada with his vote-buying spree.

The Barracuda puts on a smiley face but treats her opponents like deadly enemies, and tries to destroy them. Just like Great Crazy Leader does. He hates culture. She tried to fire the town librarian...and her brother-in-law. He wants to destroy the Liberal Party.

And then of course there's the small matter that the Barracuda lies about everything. And so does Great Big Liar.

But the most disturbing point of similarity between Palin and Harper is that they both belong to fundamentalist churches that believe the world is about to end...and that's a GOOD thing. Believe too that gays are an abomination, a woman's place is in the home, and abortion is murder.

"I suspect many Canadians would be upset to learn about the conservative beliefs of the Christian and Missionary Alliance," Noll said. "They certainly are far less tolerant than, say, the United Church of Canada..."

I bet they would.

Remember this Canadian campaign is going to take place as the one in the U.S. enters it's last desperate weeks. And Sarah Palin is going to have to explain her extremist religious beliefs, and what kind of country she would turn America into if she ever became President. It's going to be the BIG STORY.

Great Pig Leader's government is crawling with SoCons. Dozens and dozens of his MPs are in favour of criminalizing abortion through the backdoor. His Director of Policy and Research is Darrel Reid, the former president of Focus on the Family.

So doesn't it make sense with so much at stake, to ask Stephen Harper some hard questions also? 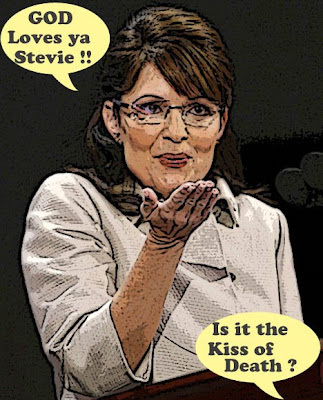 Or the power of the Hidden Agenda?

I've been thoroughly enjoying your posts Simon. Both Harper and Layton seem to be itching for a US-styled election campaign where all they have to do is champion their leadership qualities. Well if that's what they want, an election that is vacant of any policy platform, lets go for the jugular just like they do in the US.

As for the NDP who I traditionally support and used to campaign for, give yourself a serious wake-up call. If you think that Harper is no worse a threat than Dion, you are hopelessly dreaming in technicolour. But then again, maybe they too want to play the neo-conservative incremental gains game to obliterate the Liberals and reduce them to the same relevance as the UK's Liberal Democrats so that Jack can take the helm as a newly fashioned Canadian Tony Blair.

Wow - those are some strong words.

You've raised some very good points - somewhat evocatively. I wonder if voters will remember all of these points when he runs his "beside the fireside" campaign.

Who are you voting for on election day?

As soon as I started reading some of the material that's started to come out about Palin's record as mayor and governor, it was like looking at Harper looking in a mirror.

In fact I think the new slogan for the campaign should be: "Stephen Harper. Sarah Palin in a sweater vest."

Of course in the U.S., Palin's far right wing social and religious beliefs are somewhat of an asset. Here - or at least outside of the Alberta and BC Bible Belts - they are most certainly a liability. So far, anyway.

Sadly, speaking of Harper's "hidden agenda" aloud is a proven non-starter. Although it's hardly necessary at this point, since his agenda is pretty much out in the open for anyone who cares to look.

Well put as usual Simon. The similarities are there, all right. As far as comparisons to mayors go, I've also noticed something vaguely familiar about those creepy Harper ads.

Hi Beijing York !! Thanks for your comment.You know believe it or not I believe in the politics of civility. The kind of politics that reflect the values of our country. But Harper and his thugs have been playing jugular politics a la Karl Rove for so long, and getting away with it, that I have no choice but to believe that the progressive side has been trating them with kid gloves for way too long. I believe in a kinder, gentler, more just world. But to get there I'm afraid we're going to have to adjust our politics and put on our gloves. But only until we win ... :)

Hi Scott!! Yeah they are strong words. And I would prefer not to have to use them. But what these republiCons have done to our country, and what they could do if they ever get a majority makes me fighting mad.So if they want a brawl they got one.
As for who I'm going to vote for I'm not sure yet.I could support any of the progressive parties. If I lived in northern Quebec I would even vote for the losers from the Bloc. Anyone but Harper's Cons. Anyone who can stop Harper from gaining a majority. To give you an idea of how non-partisan I am my favourite political leader these days is Newfoundland's Premier Danny Williams. He's a Conservative but at least he has the balls to stand up to Harper...or Stevie.
The only loyalty I have is to my beautiful Canada and whatever is best for her...

Hi Jennifer !! Yeah isn't it weird. When I told my friends I thought Harpo and Palin were like peas in a pod, they all started rolling their eyes and looking at me as if I was crazy...or just the usual Simon... :)
I like the sweater idea too. How about Sarah Harper Palin Bush?
And your right about the hidden agenda.It really isn't hidden is it? Except that if he acted like a boorish misogynistic liar with only a minority I can only imagine what he would be like with a majority. I like to think I'm not scared of anything, but I am scared of that. I can't help feeling that we're sleepwalking to disaster...

Hi Scott in Montreal !!! Nice to hear from you again. And thanks for the link it's BRILLIANT!!
The monster Harper channelling Mayor Shanks. How I miss poor old John Candy.I bet he would have squashed Harpo like a bug.
BTW if Harper gets a majority I'll be dropping everything here and going back to Montreal in a hurry.
These fascist Cons will never find me there !! :)