Stephen Harper and the Monster Man 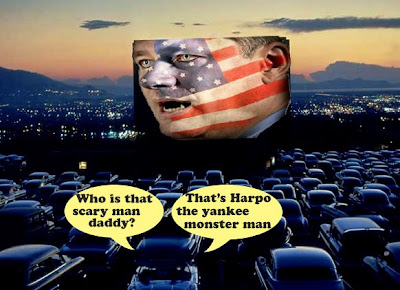 When Hermann Goering heard the word culture he reached for his browning.

When Stephen Harper hears the word culture he reaches for his inner boor.

“I think when ordinary working people come home, turn on the TV and see a gala and all sorts of people at a rich gala all subsidized by the taxpayer, claiming their subsidies aren't high enough when they know they have actually gone up, I'm not sure that's something that resonates with ordinary people...."

You know ordinary guys like him, who sit on their couches munching popcorn plotting how to destroy their opponents. While their wives go out on the town with John Baird.

When of course he's really a neocon monster who hates Canada and its values so much he's determined to destroy the culture that sets us apart from the Americans.

A culture he doesn't even believe in:

Because that's what it's all about. He knows that if you want to change a country beyond recognition, and turn it into a neocon jungle, first you have to kill the culture that protects it.

That's why he is attacking artists, smearing them as rich people. When all the artists I know are as poor as I am. Who only do what they do, even if they have to struggle to survive, because they love art and they love their country. As much as Stephen Harper HATES it.

That's why he is planning to destroy the CBC.

That's why he would destroy everything beautiful in this country. Be it ever so humble.

If Canadians don't understand what a foul, twisted, yankee loving, neocon traitor Stephen Harper really is. If the progressive parties can't stop fighting each other and unite to deny this monster a majority.

Then all hope is lost.

And the Canada we love has only three weeks to live....
Posted by Simon at 1:45 PM

Harper is using Rovian tactics to paint a false picture and create a faux fiction that divides us. It's a myth that the "Tim Horton" crowd dislikes arts and culture. It's a myth that is being promoted by Harper based on lies.

The cuts he has made so far to Canadian Heritage and DFAIT (ProgArt) are industry oriented programs that help develop and strengthen cultural industry sectors, which are primarily made up of SMEs.

He has not made cuts to the Canada Council for the Arts who are responsible for administering grants to non-profit arts organizations and to individual artists at various stages of their career. These are the types of artists that Harper's retrograde supporters keep attacking in their posts and letters, conflating to very different methods of public support for arts and culture.

But rest assured, should Harper win this election, he will go after the smaller independent artists as well. He has already telegraphed his intentions by replacing Karen Kain with an investment banker to head the Canada Council.

I'm no psychic but I also believe that if he gets a majority, he will privatize the CBC and dismantle the CRTC. There will be less, if any, controls over foreign investment in the cultural industries and large media mergers. And the Canadian content system that is very much responsible for the development of a very successful Canadian recording industry and television industry will be thrown out the window.

I will ad that Winnipeg has a strong reputation of being a working class town that fights for its rights (or at least used to -- General Strike, etc). We are not considered a cultural tourism mecca and yet our small city boasts one of the highest per capita investments in the arts. It's an infrastructure that is built on serving all Manitobans more than anything else.

Hi Beijing York !! Thanks for your excellent comment. You're right about Harpo is insulting the intelligence of Canadians.I haven't the slightest doubt that Harper will privatize the CBC....after slashing its budget to make it more attractive to a buyer. Everything the monster does just depresses me so much I'm finding it hard to blog. I just can't understand why more Canadians can't imagine what could happen.However, there are still three weeks to go, and maybe as the horror of a Conservative majority sinks in, people will wakeup...

Hi Canadian Hegemon !! Thanks a lot. They are only humble little photoshops...but I love making them. I tell people it's "primitive art." :)
And don't worry I'll NEVER give up... until these hideous Cons are finally defeated, and we get our country back...

"Continental Integration" is a term used in Political Science, but it's also, it seems, the plan of Stephen Harper.

What is it? It's older than you think. The Hyde Park Agreement of April 1941, between Canada and USA was to remove the physical border between the two countries, and the answer you might guess it, was found in the United States. The plan was to make sure, that Canada didn't compete with the states, which is the reason why the Avro Arrow was scrapped. It's not a big secret, many scientists who worked on the first supersonic jet, went to work for the NASA after. But this is just the start.

This is what we were taught at Laurentian University; it went on for years, it just happens that Harper is more pro-American than most PM's we had before. The thing is, how far this will go?