The Con Media, the Fake Scandal, and the New Generation 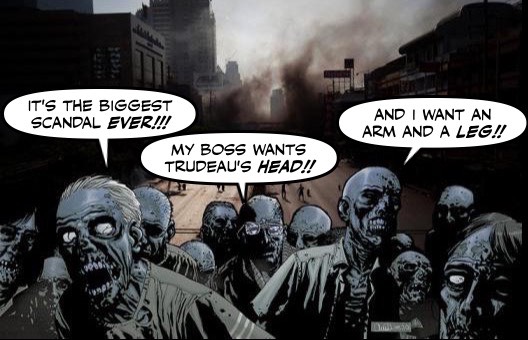 After the way the ghastly Con media has gone after him, you might think that by now there wouldn't be much left of Justin Trudeau.

And that the old zombies from the Parliamentary Press Gallery would by now be fighting over who gets an arm and who gets a leg.

Or proclaiming that there is no need for an election because Trudeau has already lost.

But miraculously enough Trudeau seems to be not only intact.... 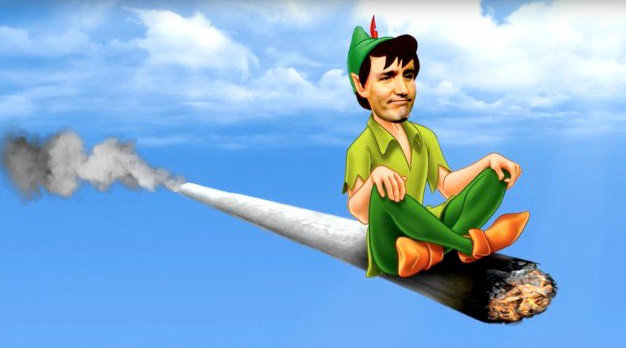 But his polls are still flying high over the others.

The latest Nanos federal ballot tracking has the Liberals at 37.9 per cent support, followed by the Conservatives at 31.8 per cent, the NDP at 13.7 percent, the BQ at 4.1 per cent, the Greens at 7.8 per cent and the People’s Party of Canada (PPC) at 1.5 per cent.

Despite the massive smear campaign launched against the Liberals by the Cons.

And the most biased media coverage I have ever witnessed... 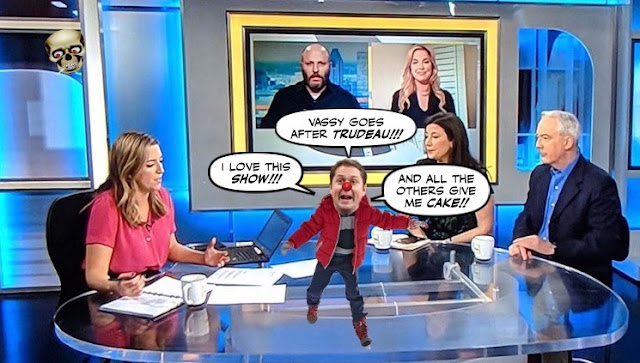 A real scandal that will taint the reputation of those Con stooges forever.

But what interests me even more than the Nanos numbers themselves is how they break down by age group.

Where if you check out the 18-29 group and the 30-39 group, you can see that liberal support is particularly strong.

And heading in the right direction.

And since the millennial generation will for the first time be the biggest voting bloc in the next election.

And most of them couldn't care less about fake scandals, and despise hate mongers.

The writing is on the wall for the Cons.

Which is just as well, because those beasts are really out of control... 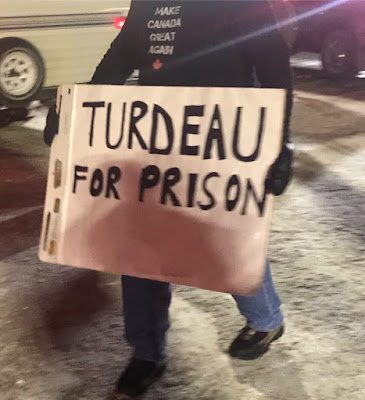 They are so ugly and so crude... 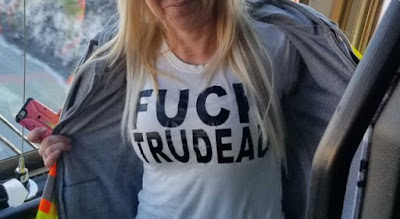 So vulgar and so violent... 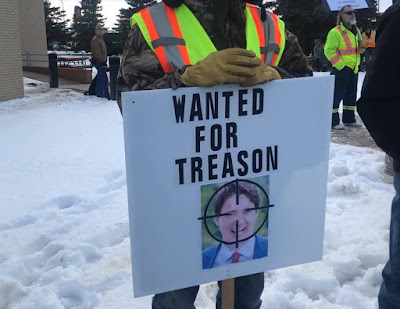 And the worse thing is, you can't get away from those toxic Trudeau haters even on Progressive Bloggers.

Introducing the idea of dismembering Trudeau over a fake scandal, at a time when so many are threatening to kill him... 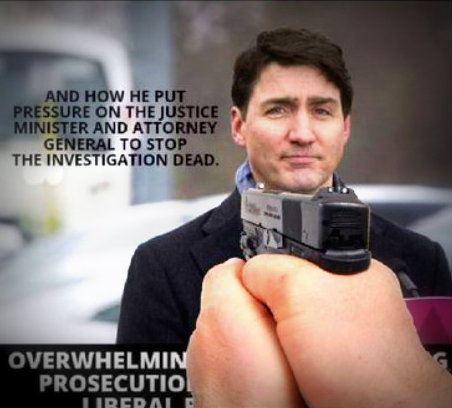 For the same fake reason.

And enough is enough.

It's OK to criticize Trudeau like any other politician, but this sick stuff has got to stop.

A new generation is preparing to take over.

And it can't happen soon enough...

P.S. I get a lot of vile hate mail, which I delete on arrival. But this one made me laugh...

This Con buffoon seems not to know the reason Hadrian and his mighty Roman legions dared not advance further into Scotland.

And I'm made of the same stuff. Bigots and bullies beware...
Posted by Simon at 10:39 PM

A Con senator at today's Kosplay Krossing-Guard Konvention told the truckers to "roll over every Liberal so that these bills can be gone."

This after that thug mayor in Manitoba said he wanted to kill Trudeau by sodomizing him with oil-rigging equipment. This isn't an anomaly. It's who the Cons are and who Scheer is.

Liberals need to dig up every single picture of Andy with his unrequited girlfriend Faith Golddigger, and make him stumble answering why the hell is he hanging around with Nazis. Who, by the way, are accusing Trudeau of staging that tragic house fire in Halifax as a "false flag" (cf. Alex Jones) to take attention away from the SNC fiasco and generate sympathy for refugees in an election year.

Aiding and abetting violent hate groups for political gain or any purpose is unacceptable. Fuck the SNC bullshit and call an inquiry into the Cons for affiliating with white supremacists. Shut down the Rebel and throw these terrorists in jail.

If the scandal is fake, then why did Gerry Butts resign?

Obviously you didn't read his letter. Perhaps a refresher course is needed.

I hear a CTV paparazzi has pressed his wife for more info to satiate the interests of the perpetually bloodthirsty -- er, curious. "Just asking questions. It would be irresponsible not to speculate."

He grew tired of saying my name is Gerry not Seymour/

I suspect that to some extent, there are people like me who heard about the issue, decided that there was no real scandal and has tuned it out (literally in some cases) as another Con false frenzy.

I am much more upset by the Canadian Gov't's endorsement of the US–sponscred attemped couop d'état in Venezuela. But AFAICS the mainstream media is not touching it. There seem to be lots of wildly slanted stories about how horrible life is under Maduros but nothing about blatant illegal attempts at regime change.

I am rather horrified that Justin Trudeau and the Cabinet seem to be supporting this.

@ Anonymous12:34 AM
Probably to remove one despicable Con attack point against the PM and possibly because his resignation may allow him to "take the gloves off" and counter-attack as he could not do while in his official position?

Hahaha, look at the failed history major there. I think it's funny that Justin's youngest son is named for the Roman emperor who built WALL. He seems to be a very bright boy. Maybe he can construct a fortification to keep pusillanimous poltroons like Pee-Pee Party Patrick out of Canada.

Ignore that Con poltroon Simon, we don’t want you going anywhere. What I find bizarre is that the Cons are so racist now they’re even going after white people. God have mercy on us.

What was that so-called “progressive” blogger thinking? Doesn’t he think that Justin Trudeau isn’t the target of enough sick hatred? I will never visit his site again.

The irony is that Canadians might realize that there is more to our legal system than "Da Boss" barking new commands. If you are a Con and want pipelines simply pass a law overruling provincial, aboriginal, scientific concerns. If you don't want any suspected ISIS accomplices returning strip them of their Canadian citizenship breaking international law. If you don't like protests pass a law making it an illegal form of free speech, kettle them and lock them up, the list goes on... If you are a Con "Da Boss" wields all the legal power but its an entirely different story if you are a liberal discussing legal remedial alternatives for a wayward company. If a few more Canadians start questioning some of possible legal implications of the outlandish claims on the Con web site the whole SNC affair will have been worth it.
RT

In the words of Doug Ford I have the voice of the people. Yeah 38% of the people give you the right to run a bulldozer through the body politic.

Is there a lawyer reading this? To my mind those posters with Trudeau in the crosshairs are actual death threats, not just someone mouthing off about killing so-and-so. Aren't they illegal? Making death threats (or other credible threats of bodily harm) is a very serious offence.

Hi Jackie...I totally agree with you. The Cons and other toxic Trudeau haters need to be taught a lesson they'll never forget. This diseased hate fest has to end. Progressives have been too soft on them, and the time for playing nice is over....

Hi jrkrideau...I don't think Canada should push for regime change, but all I can see so far is support for new elections, which the Maduro regime could well win, and a rejection of a military solution. So the only thing that would make me happier is if we could arrange a no strings attached shipment of food and medicines for the suffering people of that country....

Hi anon...yes I took your idea and told Jackie this can only mean The End is nigh. But don't worry, I may have to go into exile in Scotland for a while, if Scheer and his Nazis come to power, but I'll never stop fighting for this country I love so much....🏂

Hi anon....I don't know what he was thinking, but I suspect that hatred clouded what's left of his mind. He was once a much better person, but his hatred for Trudeau verges on the homicidal, and it has done him terrible damage. Hopefully he'll realize what he has become and change for the better before it's too late....

Hi RT....Yes, in Con World it's all so simple. Just do what da boss or da Fuhrer says, but just don't call it fascism. In that regard I must admit I am saddened when I hear indigenous Canadians declare that they will never vote for Trudeau again, when as you point out, Scheer would bulldoze native rights, with the help of the army if necessary. And Infeel the same way when I hear our ghastly Con media whining about why Trudeau won't let JWR speak and to hell with legal niceties. When this ugly and really dumb episode is over I may require shock treatment to properly forget it..l🙄

Hi Lagatta...for over a year I have been documenting death threats against Justin Trudeau. The RCMP has laid charges against about five or six people, but they can't keep up. And the media treats these threats like traffic ticket offences, so the threats continue and keep poisoning our country....