Why Is Andrew Scheer Suddenly Running For Cover? 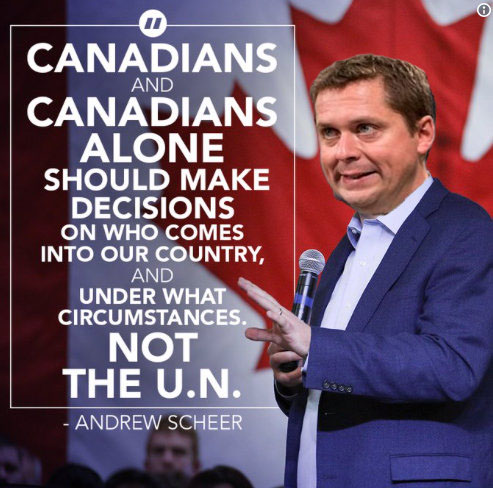 It was one of Andrew Scheer's most disgusting attack ads ever, one that started as a Nazi meme in Eastern Europe.

His outrageous claim that the U.N. Global Compact for Migration was a sinister plot by Justin Trudeau to erase our borders, so gazillions of refugees could invade our country.

Even though the Compact wasn't binding, and even Chris Alexander called him a liar.

While I got to call him a liar, and a kooky bigot... 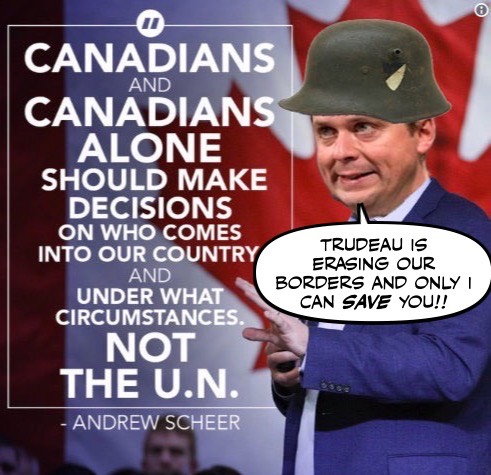 A kooky conspiracy theorist who was trying to scare Canadian into voting for him.

But unfortunately for Scheer, he did manage to scare some of his scummy supporters so much they started bombarding Justin Trudeau with death threats. 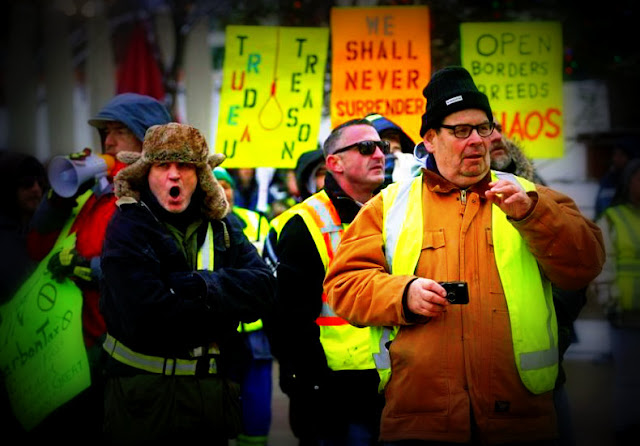 And Scheer was forced to face the fact that he could end up looking like a kooky liar, with blood on his hands.

So now he's been forced into a humiliating retreat. 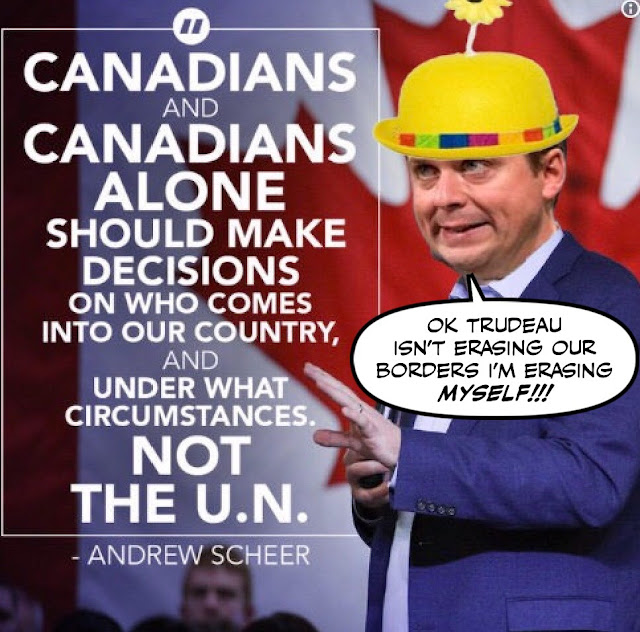 The Conservative Party is distancing itself from one of its own online ads after using Google to spread the false claim that “Justin Trudeau is letting a foreign entity take control of our borders.”

In response to questions from The Globe and Mail about the ad, Conservative Party spokesman Cory Hann declined to defend the party’s claim that the Prime Minister is letting a foreign entity take control of Canada’s borders. “That doesn’t accurately reflect our position, and the ad is not running,” Mr. Hann said in an e-mail.

And that's not the only ugly attack ad that has him running for cover. There's also this one.

The Conservative party has removed all Heritage Minute branding from an online video released over the weekend that took aim at the Trudeau government for a handful of ethics breaches.

The Conservatives first put up a new version of the ad on Sunday with a long disclosure saying it wasn't a real Heritage Minute following initial push back. After continued concerns, the party finally removed all Heritage Minute branding from the ad.

The story I told you about here.

Where once he was smiling... 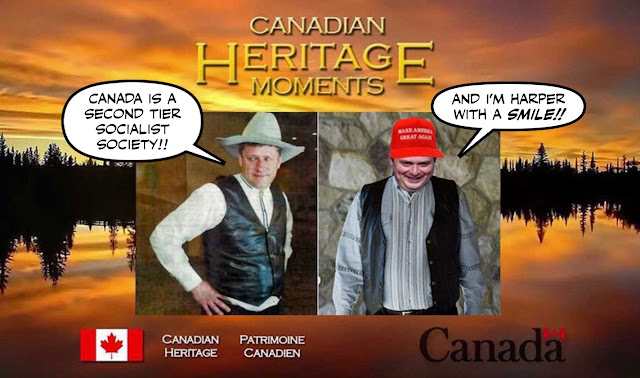 But after causing great damage to a great Canadian institution.

Now he is not. 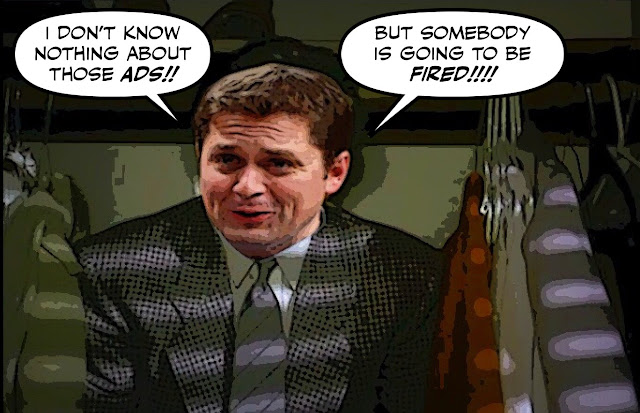 Now we get to use those attack ads to attack THEM.

And in less than nine months, we get to fire them all...

Ezrat sicced his Twitter mob on an elementary school that participated in World Hijab Day, calling the teacher a pervert who sexualizes children. So now the Cons are encouraging Sandy Hook wannabes. And Gavin McInnes is suing the Southern Poverty Law Center for calling the Proud Boys a hate group. They've already been getting threats on social media too (obviously proving the SPLC correct).

At what point do we stop calling the Rebel scum stormtroopers a political party and start properly classifying them as the "old-stock" domestic terrorists they are?

Just like Trump, everything Scheer touches turns to shit. Historic Canada should sue them for whatever they've lost in donations and millions for the damage they've caused to their brand. Just the thought of being associated with the putrid Cons makes me want to wretch.
That no one thought of the possible ramifications of mocking historic Canada for partisan political purposes shows a high level of incompetence and immaturity we've all come to know as the Con Clown party. I bet they laughed their asses off when they created their fictitious clip. Who's laughing now?
JD

The Scheer Cons have spent the last 3 years conducting a huge propaganda campaign. Produce a piece of Scheer crap, monitor Con web sites and social media to determine who bites, note key voter profile statistics, repeat with the next piece of crap. With the exception of potential defectors to the Max camp these voters are locked in. When the time comes all they have to do is rattle a personalized dinner bell to cause a feeding frenzy on election day. That part of the strategy is simple those people are locked in and as a result they have approximately 35% of decided voters after 3 years of non stop propaganda. The problem is the undecideds, depending on the size of the group and their geographic location they need to Con somewhere between 40% to 50% of the undecideds to win a majority. This is a challenge and to be successful Scheer has to morph into a "gee aw shucks I only want the best for all Canadians" in order to woo middle of the road voters. Like their American cousins the Trump card is immigration but the Cons have to play it like the porridge in little Red Riding Hood and the Three Bears... not too hot and not too cold. The Liberals have opportunity to move first on the immigration file and cut the fker off at the knees but will they? Its really about communicating a proactive strategy and reasons why any minor differences exist between now and past governments, how border crosser numbers are intertwined with US deportation decisions, and signalling competent strength to face any new crisis. Sometimes its best to ignore the opposition rather than validate them with a response but certainly not in this case. Brexit was the result of immigration issues both real and perceived especially about fear Briton would be overrun by millions of Turks when they joined the EU.
RT

Hi Jackie...the far-right wingers in this country are budding terrorists, and having a person like Gavin McInnes complain about his prescious Proud Boys being called a hate group is laughable if it wasn't so tragic. I've warned that those freaks are taking this country to a very bad place, and we need to come down on those hate mongers like a ton of bricks...

Hi JD....yes, Schmrar does seem to have the reverse Midas touch. He is Harper Two but I have to admit that I find his whole act even creepier than his fallen leader. I never thought I would say that, but at least Harper kept a lower profile, while Scheer keeps coming at us like a bat out of hell. That freak has to be given the boot before he drives us all crazy....

Hi RT...I agree with everything you wrote. The Cons have their base nailed to the wall, and with eight months to go, the Cons are now trying to expand their appeal. The problem for them is that they have Bernier on their right flank, and they can't be all things to all people. The more I watch him, the more Scheer reminds me of Nigel Farage , so he can't be underestimated. For when I was in Britain just before Brexit I thought Farage was a loser, but look what he managed to accomplish....