Andrew Scheer's Most Outrageous and Biggest Lie Ever 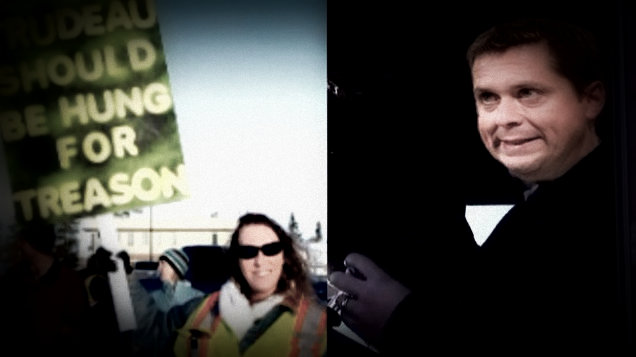 In one of my last posts, I looked at how Andrew Scheer and his ugly Cons have been whipping up racism and xenophobia all over the country.

Helping to pour fuel on the flames of the same kind of bigotry that has already claimed the lives of six peaceful worshippers of a Quebec City mosque.

As well as triggering a wave of death threats aimed at Justin Trudeau.

So you can imagine how I felt when I saw this...

Justin Trudeau's Liberals have done more name-calling and fear-mongering than anyone. Trudeau should stop accusing others of it until he looks in the mirror. pic.twitter.com/G7XaMWNH6e
— Andrew Scheer (@AndrewScheer) January 31, 2019


Or how loudly I laughed.

And why I felt I had to say this: 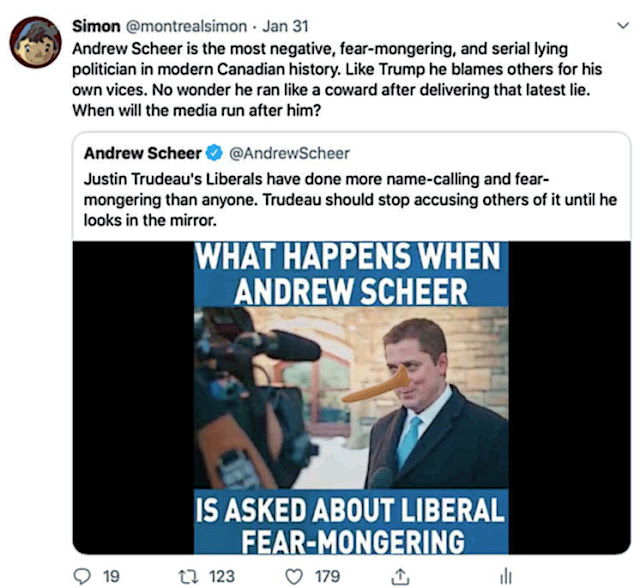 And of course, after listening to this nonsense:

"Justin Trudeau is the one who is playing the politics of fear and division."

I also felt I had to add the long nose of a serial liar.

For suggesting that Trudeau is uglier and more divisive than he is, is not only absurd, it has to be his biggest lie ever.

And the results couldn't be more disgusting.

A woman at a town hall in the province of Saskatchewan in Canada’s west, a region where the Liberals are in trouble, accused Trudeau of “working for your globalist partners” to betray Canada.

“What do we do with traitors in Canada, Mr. Trudeau? We used to hang them, hang them for treason,” the woman told the stunned prime minister after asking him about Moslem sharia law and Saudi Arabian oil imports. 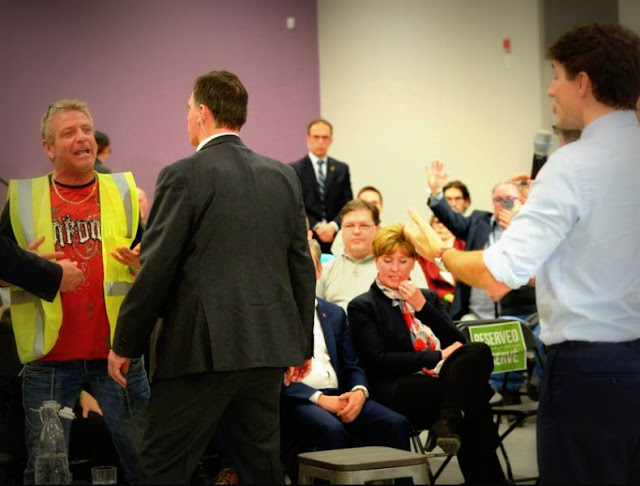 In the Quebec town of Saint-Hyacinthe, a man dressed in a yellow vest swore loudly at Trudeau and accused him of selling out the country.

For nobody can fear-monger or Scheermonger as much and as well as Scheer can... 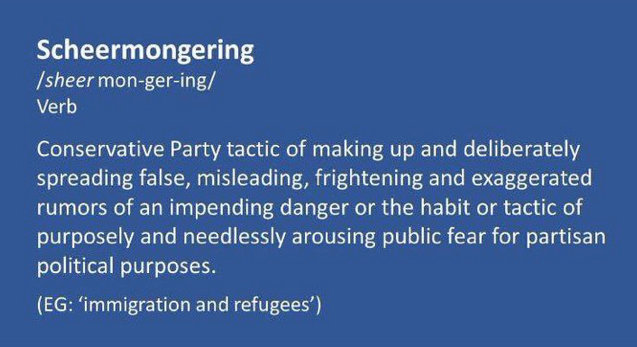 And for that alone he can never be trusted

As for Trudeau I watched him at a town hall last night handling questions as politely as ever. 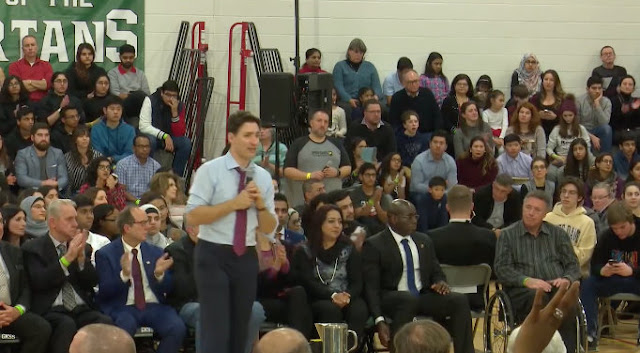 And when I saw what he had to say this morning in Toronto.

Justin Trudeau insisted Friday that he would stay positive in the face of what he predicts will be a "negative, divisive" election year.

Speaking at a Liberal fundraising breakfast at Toronto's Fairmont Royal York hotel, the prime minister said he plans to focus on bringing people together.

"We're going to have to stand in the face of what very likely will be negative, divisive campaigns while we stay positive, because we know that scaring people and dividing people might lead to short-term electoral gains, but it ends up hurting your capacity to govern for everyone," Trudeau told a group of supporters.

All I could say was good luck.

For the lights are going out all over this country... 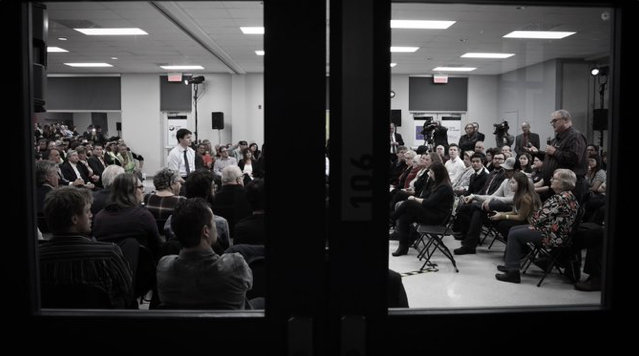 A lot of dirty old men want him dead. The Cons are in a murderous frenzy.

And only his decency and our Canadian values, can lead us out of this darkness...

I wonder if Angry Andy expressed any bullshit platitudes for the Bell Let's Talk campaign, before going right back to his usual Trump-quality trolling that'd make anyone feel anxious and depressed. I ended up having to block Twitter on my home computer because reading Trudeau's feed made me want to dig my eyes out.

But I do notice the Cons seem to be in panic mode after the announcement of the social media monitoring committee that aims to counteract the kind of troll farms and disinformation that forms the core of Hamster the computer chipmunk's agitprop campaign. This could get interesting and it's probably going to get ugly. "Click OK to delete CPC.exe..."

Speaking of social media, though, for all the resources the Cons have sunk into said attack of the stormtroopers, their in-house crew doesn't look like much worth writing home about. You might want to share this one as a sign that maybe (I hope) the wheels are starting to come off. Besides the disturbingly Trumpian "Lock 'em up!" / "But their emails!" invocation, um... anybody got a spellchecker? Anyone? Mueller?

I guess Bryan is no fan of Gillette razors. When a member of your communications team needs a proofreader of his own, it might be time to recalibrate. Or maybe Bryan is a bot programmed to let the jokes write themselves. "Andrew Scheer: Proud supporter of the Bush Doctrine." "Vote Conservative: Shave and a haircut... two-bit crooks." "I'm Andrew Scheer! I'm a lumberjack and that's OK!" Now, correct me if I'm wrong, but didn't Tony Gazebo have one of those... inquiries not so long ago?

Childish "he hit me first" tactics designed to muddy the waters and distract voters from the fact that the Cons do not have an action plan to fix real issues or even the Trumped ones based on the use of fear and bigotry. The strategy so far is to pour enough shit into the water so the voting public will jump at the closest baited hook they can see on election day or are overwhelmed by the stench stay at home. Hey it worked for last minute Dougie and Trump with the possible exception that he over psyched himself on building the BIG BEAUTIFUL wall. The longer the Scheer conservatives are allowed to get away with spouting cherry picked propaganda and not held to account for a detailed action plan the better their chances of being elected. The best we can expect from them is infomercial type "Build the Pipe" by decree never mentioning that Harper's signature Keystone XL is still tied up in US courts over routing issues. Would also love to see his action plan on how he is going to prevent refugees from crossing the US/Canadian border. Intimidate them by throwing them in prison and confiscate the children? Can't simply bundle them up and push them back into the US or into the country they fled from unless we rewrite the Canadian constitution and international law. Simple minds solving complex global migration issues brought on by the wars and climate change some of our past policies have helped contribute to. Perhaps isolation and a simple minded wall is not so bad but with the Cons in charge they would simply turn it into a dog fight pit with the bettors perched on top of it. Next up is the Alberta poodle facing off against the Quebec bouvier with China and Russia placing their bets on the doodle.
RT

Staying positive is all fine and good but JT needs to counter the Scheer propaganda machine by challenging each and every one of the Con's bullshit ads. They need not be nasty, just fact based info that is readily available to Canadians through their social media platforms. Besides, maybe the MSM will learn a few things to throw at "Mr. I can do everything better but I wont tell you how" Scheer before he cowardly cut and runs after one of his attacks on JT.
It's clear by now that Scheer has nothing to offer Canadians except hate and division. They are trying to win the election by simply demonizing every single thing the Liberals do, or don't do, over and over again and if the Libs don't start vigorously countering the fiction with facts, a fate worse than Harper may be the result.
JD

.. waiting patiently for mr Smear and his hamished 'Contrary Prairie' war room and the back room wanks & cranks to actually cease their shrieking.. and address 'a single real thing' - not the airy fairy posturing & preening, not the sky is falling wails & whining..

Like uh.. something with some real 'weight' to it. You know.. his reponse to the Supremes deciding 'Polluter Pays' re abandoned wells leaking methane.. there's one they could spout about.. or how their llan is going to 'disappear' the tailings ponds seeping into the Mackenzie River.. You know.. toxifying downstream First Nations freshwater fisheries.. Look up 'Minimata' in Japan to see how that plays or.. closer to home, Grassy Narrows. Lucky that Ontario's First Nations has Doug Ford to save the day.. eh ?

Who knows.. maybe Andrew Scheer wants to take a poke at where all the west coast salmon went.. and collapsing food chains as the herring disappear. Maybe he secretly adores the boreal caribou on our 25 cent piece.. Hell he was A-OK with Petrr Kent, Minister of Environment decreeing that air dropping strychnine laced meat baits to poison boreal wolves was uh.. a 'solution' - shame about all those other species, crow, wolverine, coyote, hawk, racoon, bear.. that died in agony too. Of course it was Stephen Harper & Ray Novak dispensed the wisdom and permission ln that travesty. Could Andrew weigh in ? As a self annointed 'westerner' surely he was or is concerned !

Hi Jackie...I know that you like me are deeply concerned about the Dark Trumpian place Scheer and his flying monkeys would take us. It's a monstrous place and to hear Scheer deny it and accuse Trudeau of being more divisive than he is just blows my mind. If he is allowed to get away with that Big Lie. I truly fear for my country. As for that Con threatening Gerald Butts it really is pathetic. By the time the Con Axis goes down they'll be the ones in prisons all over Canada...

Hi RT.... Doug Ford ran without a platform and won, is Scheer aiming to become Prime Minister the same way? For without an engaged media holding the Con's feet to the fire, he just might. I read an interesting article yesterday that suggested political platforms aren't necessary, they're so yesterday, and that it's a feeling people want. I might write a post about it, if I can find that article. We are in a different time and we need to work on emotion as well as reasoning. And of course we need to prod the media to start asking hard questions, as you point out. For the longer the Cons can make lies look like the truth, the harder it will be to recover the truth....

that woman has drunk the "cool aid" andy is passing around. accusing the P.M. of being a traitor. Its actually funny, until you realize she actually believes.

Now as to the Saudi oil, no problem she can stop buying it immediately. she won't be driving too far, nor will she be taking much transmit. Its a fact of life. Wonder where she thinks we're going to get the oil elsewhere from, she won't be any happier if we get it from Iran.

we have oil in alberta, but for it to get to the east, well they'd have to buy it from Albert and then it still has to be refined by the Americans and if you're talking about nasty countries, the U.S.A. is right up there.

love the new word you've created. scheermongering. wonder if you can get it into the dictionary.

Hi JD...I agree with you. Justin Trudeau is a very positive person, and nobody is suggesting that he crawl through the gutter like the Cons. But since the media isn't doing its job him and the other Liberals will have to start countering Scheer's lies far more aggressively than they have so far. It's a delicate balance but the Cons are so corrupt, it shouldn't be THAT hard. Especially if Scheer has to tack even further to the right to try to stop Bernier from stealing his support..

Hi salamander...Andrew Scheer couldn't care less about the environment. He's a religious fanatic and their position is that the Lord will take care of the earth, while they concentrate on their version of the Gospels i.e. The Gospel of Greed. On the positive side, climate change will be a big issue, a long hot summer will make that even clearer, and without a plan the Cons will get almost no support from the younger generation, and that should be enough to cook their goose...