Doug Ford and the Whack-A-Mole Farce 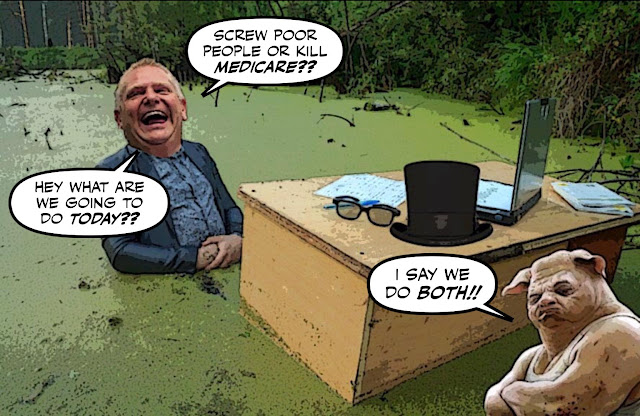 He's only been in office for just over seven months, but already Doug Ford is the worst Premier Ontario has ever known.

He clearly doesn't know what he's doing, and to make matters worse he's all over the place. One moment he's threatening to privatize medicare, the next moment he's denying that.

So I wasn't surprised to see the Liberal MP Adam Vaughan compare his brutish and incompetent regime to a game of whack-a-mole.

Only to have the Ford Nation and other Con hogs like Candice Bergen, accuse him of threatening to actually kill Ford. 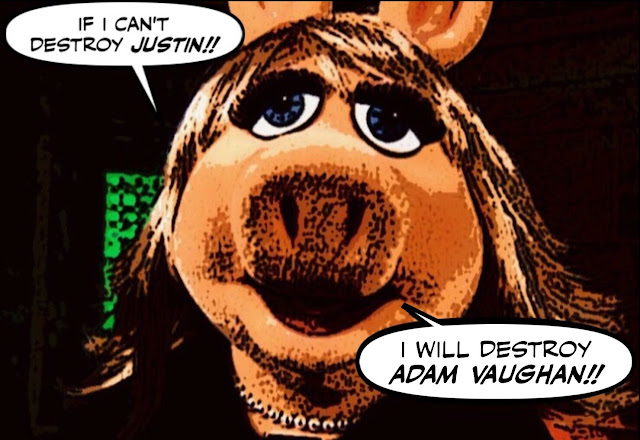 And be forced to explain himself: 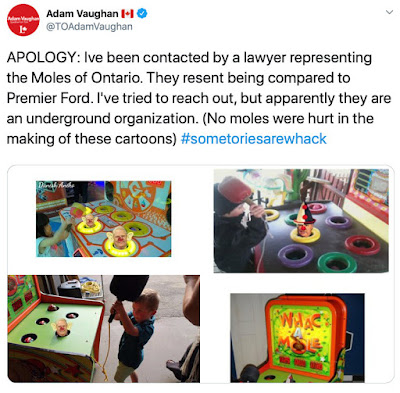 Which had me howling with laughter.

Until I took a closer look at this picture... 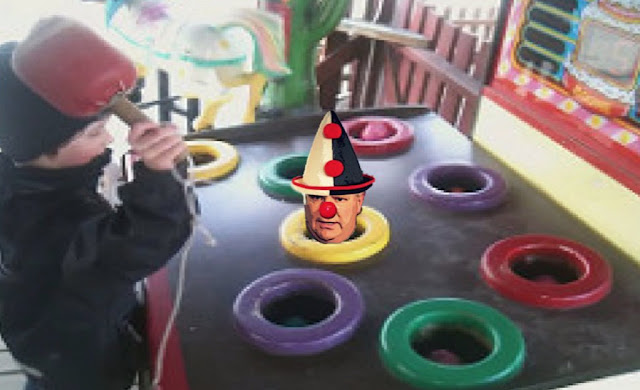 And shouted "Hey somebody stole MY mole!!!!" 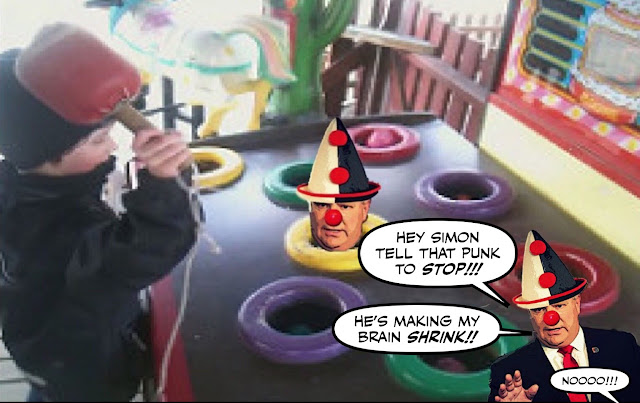 So I just want to make one thing absolutely clear:

Neither my mole and I believe in political violence, unlike the Cons who are always threatening to murder Justin Trudeau.

We want the real Drug Fraud to survive, until his term in office expires.

Hopefully sooner rather than later.

So he can be put on trial for his many crimes against Ontario.

And sent to the place where he truly belongs... 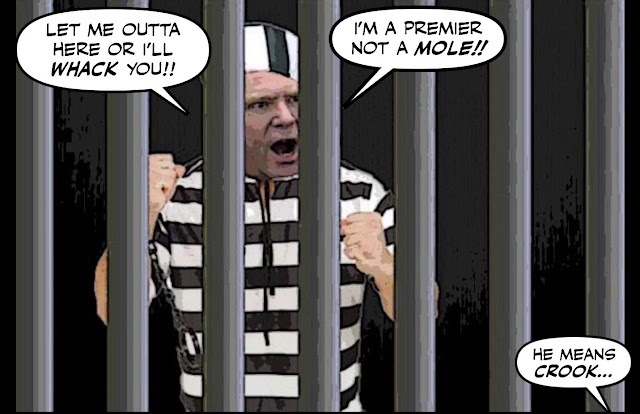 I had no idea the original comment was so innocent. The reformatories seem to be especially alarmed about something these days.

Admittedly a poor choice of words in the context of the already heightened tensions of the campaign, but this pales in comparison to the violent pornography that's been all over the Cons' media mouthpieces practically since Justin Trudeau even contemplated running for office. Not quite a case of "I'm rubber you're glue" when you consider that the Cons have actual white nationalist groups and the yellow vest cult in their ranks. Plus the Rebel connection that remains a third rail nobody seems to want to address publicly, which has radicalized people who've actually gone out and committed murder. I seriously doubt anyone is going to actually go out and "whack" Doug in the Sopranos sense. Now Andy, he reminds me of if McGee from "NCIS" had an idiot twin brother in need of a Mark Harmon head slap. And Hamster reminds me of the show's young medical examiner if he had the personality of an Unsub from "Criminal Minds."

The Neon Nazis over and over again fantasize publicly about assassinating Trudeau, and the mayor of that town in Manitoba even verbalized a disturbingly detailed scenario of the medieval torture he wants to subject the prime minister to. So, yeah, OK, Vaughan got ahead of himself. He apologized and clarified. Meanwhile, Doug's policies are actually going to kill people, and we're all still waiting on Andy to fire Hamster and publicly condemn the hateful rhetoric against Trudeau, his family, Notley, and Liberal MPs. And we'll continue to wait for the latter until Febuember 12th of Never. It's frustrating enough to make one want to punch themselves in the face.

The hypocrisy of the Cons is truly astounding. JT gets regularly threatened with death by their deranged supporters and all we hear is crickets. Dimebag Doug has a witty, harmless tweet directed his way and Candace Bergen is pulling her wig out. Fucking hypocrites!
On a brighter note, an early spring is being predicted. Dimebag Doug was at a groundhog day event and the big toothy rodent didn't see its shadow. Neither did the groundhog.
JD

The people of Ontario ought to be very concerned about their health care. His "advisor" is Gordon Campbell, former premier of B.C. and if you have a look at what happened during his reign of error and health care, you'll go running to Quebec to ensure you can get health care there. The same goes for education. Expect to see more privitization. Expect those to be working in hospitals to be laid off, new contractors brought in, and people having to accept their old jobs, with new contractors at a fraction of their former salaries and no benefits.

One of the things which did grow in B.C. during the Campbell/Christy Clark years was child poverty. B.C. had the highest rate of child poverty for all but one of the sixteen years they were in office. poverty in Canada. Why do children have such a high rate of poverty? Because their parents make such lousy salaries. In B.C. they ensured, mostly women, went from $18 an hr. to min. wage if they worked in hospitals and private elder care homes (government funded). Hospitals were closed or E.R. hours restricted, etc.

the people of Ontario voted for Ford, so now they will have to live with it or die because of it. The best you can hope for is some of the MLAs will defect, but don't count on it, they do like being at the public trough. B.C. also started its run during the Gordon Campbell/Christy Clark years to win the title of the most corrupt province in Canada. The RCMP raided the Leg. buildings and we ended with RailGate.
if you want to know what your province will look like, check out the blogs of Norm Farrell--In Sight.ca; RossK--The Pacific Gazetteer; Laila Yuile; B.C. Mary, now deceased; and Rafe Mair, now deceased. Their blogs go back to 2001 and chronical the disaster.

You will notice the party was referred to as the "B.C. Lieberals". They were not Liberals in the true sense, they were Cons, and they had lots of former harper staff working for them along with defeated Alberta Cons. The top 177 B.C. Liebercon donors, who gave $155MILLION to the B.C. Liebercons received $15BILLION in contracts, subsidies, and other special favours. Gordon Campbell began a give away of public money for private purposes by starting run of the river power companies. These companies, started I.P.P.s, and B.C. Hydro was forced to purchase power from them at 10Cents a kw. and sell it for 3 cents a Kw. the contracts go on for 25/30 years, hence the billions we as taxpayers will pay out to these companies. if Ontario starts any of that, don't be surprised, remember Gordon Campbell is Ford's advisor.

It was a poor choice of words by Vaughan. However no one aside from Candy believes Adam was putting a fatwah on big dougie.

A little gridlock wouldn't hurt. Stop giving all these clowns majorities, false or otherwise. We don't have any check on anything and when they finally leave or we get rid of them, and give some other clown his majority, the second clown just carries on with the same old pretense while he answers to a few new asses sitting comfortably in the driver seats alongside most of the old ones.

can you say proportional representation, thats democracy in its finest form, still very flawed but like a diamond with enough years and pressure it will shine

You get it, Steve.