The Cons Must Really Hate This Story 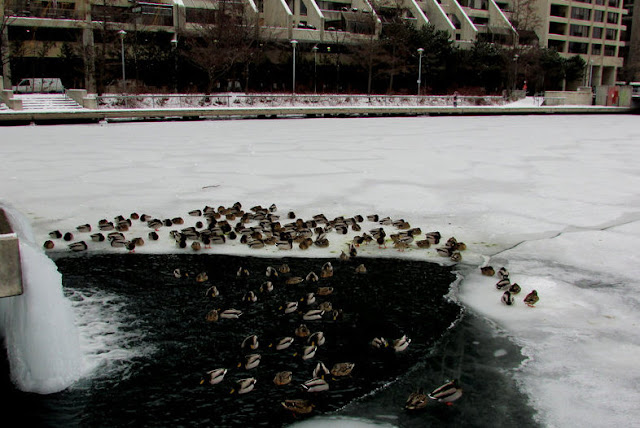 It's not always easy to love our country at this time of the year.

Not when it has been so cold recently the ducks where I live have been reduced to splashing around in this small hole in the ice, in a bay frozen solid.

And we are forced to listen to the annoying sound of the Canada haters who quack and wail about how they wish they lived somewhere else.

And of course, nobody hates this country more all year round, than do our ugly Cons. 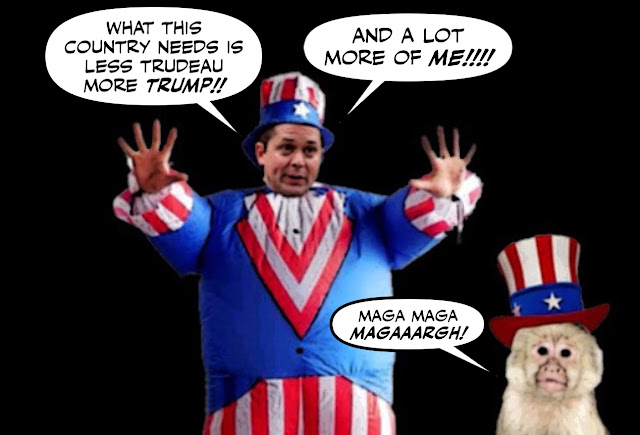 The shabby Trumplings who would have us live in a country more American than Canadian.

So I'm sure that they must REALLY hate this story.

Canada may be one of the world’s more boring countries, as yawn-inspiring as sensible shoes — wake up, reader, I know you’re snoozing!— but it’s also emerging as a moral leader of the free world.

There’s no one else. The United States under President Trump is on a nationalist tear. Britain’s leaders seem determined to drag their people over a Brexit precipice. France is distracted by protests. Germany is preparing for succession.

So Canada is stepping up.

Especially what Nicholas Kristof has to say about Justin Trudeau and the refugees the Cons hate so much.

During the worst of the Syrian refugee crisis, President Barack Obama admitted just 12,000 Syrians and provoked a furious backlash, including Trump’s Muslim ban. Canada accepted 40,000 Syrians, with Trudeau appearing at the airport to hand out winter coats to these new Canadians.

For as you know that drives the Cons crazy. 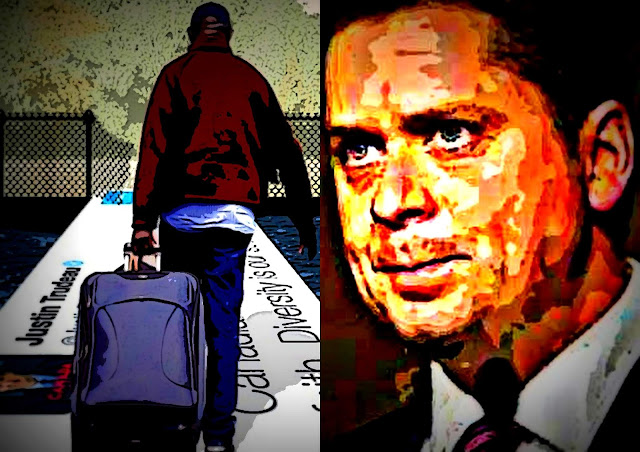 As it does the whiners who are always putting Canada down.

Whenever I say something nice about Canada, I get indignant emails from Canadian friends pointing out the country’s shortcomings (which are real).

And who will never accept that we are living in one of the best countries on earth. 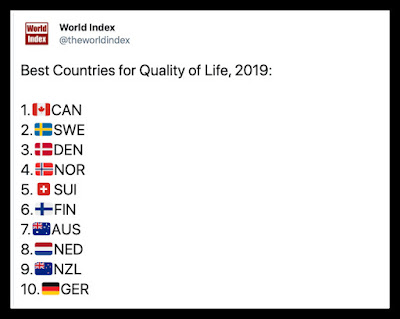 And no, it's not just thanks to Justin Trudeau and those of us who believe that his leadership is taking this country to a better place, in a world rotting with hatred and violence. 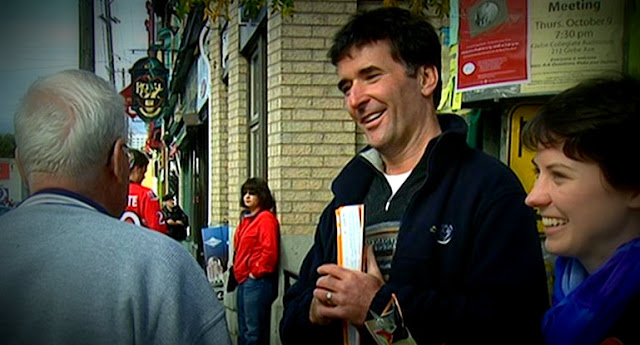 It's also about people like Paul Dewar who died yesterday, and left this letter behind to inspire us to try to do even better.

The time has come for me to say goodbye. While I have left this place physically, I have some final words I'd like to share.

In my time on this earth, I was passionate about the power of citizens working together and making a difference.

I wanted a Canada where we treat our fellow citizens with the dignity, love and respect that every one of us deserves.

In the stoic stillness of my journey, I have found my way to peace. May you keep building a more peaceful and better world for all.

Rest in peace Paul Dewar, your decent journey is done.

While those who love this country go on to try to make it an example to others.

And an even better place to live... 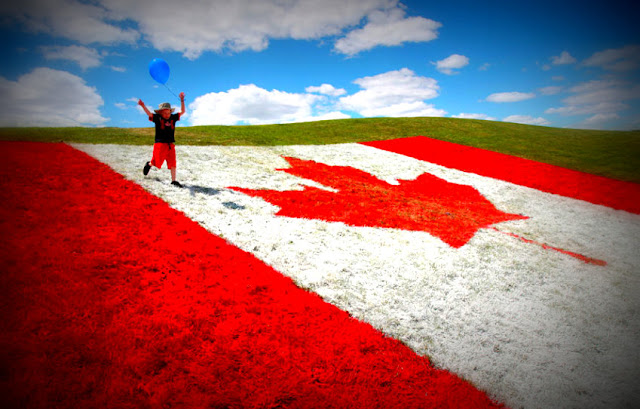 Yep, we're moral leaders in the free world alright. After five record hot years in a row of global warming, we

Keep on burnin' in the free world...

Fucking Wormtongue Kinsellout and Margaret the Wino Wente just stabbed Justin front and back again. God, short of outright shooting him, there's nothing the dirty tricksters won't do to bring this guy down. He's getting the Clinton treatment ("Lock him up, lock him up") in an election year. This has Harper's land mines written all over it.

I am not sure we can claim to be a moral leader but, at least, we seem to have avoided any number of crimes of moral turpitude or outright crimes against humanity that a number of members of the UN General Assembly or the Security Council have committed or are committing.

I cannot remember the last time we have had accusations of war crimes or crimes against humanity leveled against us. Even our treatment of First Nations people seems slightly better in the last few years.

I am rather shocked and ashamed that Canada seems to be supporting that US-sponsored coup d'état in Venezuela. That does not look good on our record.

World Index - WOW! REALLY! Not only up there with but ahead of those awful northern European socialist countries! Former PM Harper must be rolling in his grave - or, whatever.

Hey, we're not perfect. But, we can still be a great place to live.

It's over. I'm probably going to cry myself to sleep tonight. Merkel's retired, Macron is a lame duck and now Trudeau has been crucified.

The free world is dead.

Transparency International also has some reasonably positive things to say about Canada
https://viableopposition.blogspot.com/

Yes its not looking good. I thought that Harper would have went down with the SNC millstone around his neck when he fired our nuclear safety watchdog and gave our nuclear technology and infrastructure to them for safe keeping. Seems he gift wrapped the millstone and gave it to Trudeau.... beware of enemies bearing gifts.
RT

During the last federal election Kinsella had Conservative ads running on his “blog”. I called him out on it and got banned.

I thought it was Wino Wente who wrote the article but but it was Fife the Knife. Based on, again, Consellout's "anonymous sources." The media is going to have a field day congratulating themselves on building up and tearing down their own "creation." Just think of all the books they'll $ell about the end of the Trudeau legacy. Chew a good man up and spit him right out.

@RT: If Paul Wells is correct, Justin is surrounded by a poor-performing lot of hangers-on, and Butts in particular has a spectacularly shitty track record in Ontario. Perhaps Justin needs better friends or he just picked the wrong line of work. He's a good guy, an idealist, and, well, as I said talking to people about this on another site, Fred Rogers never ran for office and for good reason. No helpers to be found.

The Cons are evil through and through, but I think the Liberals and the Ottawa machine used him and rode on his father's name. I do recall reading or hearing on several occasions that the party had to practically beg him to run. He hated politics because he knew what it did to his family. But he threw his toque in the ring anyway, because he thought there was something he could do for his country.

Now he's going to end up being the fall guy, the modern-day Icarus who dreamed of brighter days but flew too close to the sun. His public image is tarnished and he'll go down as the most hated man in Canada. The Cons already hate him for simply existing, and the Liberals will blame him for PM Scheer. He'll be remembered as a combination of Joe Clark and Paul Martin. Joe the idealist who never had a chance and Martin, well, we know who came after him.

I want to extend an invitation for him to come to America and leave the dirty, backstabbing world of politics behind. Don't even bother being a pundit like Angry Tom. Be a mental-health advocate or philanthropist. A science fiction author. Head to sunny-ways California, buy a nice place (where he won't have to justify it to Penishead Poilivere), and move the family in next door to Ryan Reynolds and Blake Lively. Everyone knows heroes only win in movies anyway. Just ask Barack Obama.

Might be that Warren Kinsella, you know a guy with actual links and contacts within the Liberal Party might know a bit more but Trudeau’s true nature than you do.

@anon 7:20 (or is that Warren)? -- Bullshit. He's the Roger Stone of Canada. He has an axe to grind and he just chopped Justin's head off with it. He doxxed that woman from the Creston Valley paper after she begged to be left alone. The vulture media hounded her. He's scum and anyone with an ounce of decency knows it.

Justin is more than welcome to come to the US where people would actually appreciate him, if the tall-poppy-syndrome-afflicted Brutuses and Cassiuses of Ottawa throw him under the bus and the Con paparazzi want to chase him into a tunnel. What was it Thomas Wolfe said? You can't go home again? If you don't want him, we'd be happy to have him move right in!

Yes it is certainly a nasty bump in the road after enduring over 3 years of intense hate filled propaganda but he is a fighter and not to be counted out yet. Too many Canadians are counting on him whether they know it or not.
RT

How soon we forget. Canada was a willing partner in the unlawful US attack on Libya that saw Gaddafi filleted with a bayonet.

Canada was credibility accused of handing over Afghan detainees for torture. As the allegations spanned both Martin and Harper governments, the Cons and Libs teamed up to rag the puck preventing the public release of tens of thousands of relevant documents. It's telling that Trudeau prefers to keep that dark chapter in Canadian history closed.

But you're absolutely right in condemning Canada's support for the attempted US-led coup in Venezuela. That's another shameful Canadian contribution to US meddling in Latin America.

Jackie it’s a nasty bump on the road but it’s far from over. Trudeau is a fighter and I believe as this story comes more clearly into focus people will see it for what it is. Even the people who are “meh” on Trudeau or mildly critical do not view him as corrupt, they view him as unserious.

I find MSM in Canada are acting like vultures.......ready to believe Anything!

Hi UU...Thanks for answering anon@12:42 because I don't have the energy to deal with that kind of Canada hating negativity. The negative ones resemble religious fanatics who stand on a hill and condemn us for not being perfect, while we toil in the fields trying to make our world better than it is now. And unless we can keep,hope alive we will get nowhere..l

Hi Jackie...Kinsella and Wente are mirror images of each other, two bitter people who are becoming more cranky and pathetic with every passing year. Please try to ignore them because they are their own worst enemies...

Hi jrkrideau...I believe that everything is relative, and that no countries like no humans are perfect, except for me of course. 🏂 As for the situation in Venezuela, I am a bit concerned that Canada is getting involved in a situation it doesn't really understand. But so far it has said it is opposed to any military intervention, and can serve as a useful counterweight to countries like Brazil....

Hi Jackie...don't despair, the battle is far from lost. The fact is whether the PMO wanted SNC-lavalin to get a so-called DPA the fact is they didn't, and as for Jody Wilson-Raybould's suggestion that she as transferred be cause she opposed it there are reasons to regard that with scepticism as I have explained in my latest post...

thank you for printing the letter. Dewar served this country well.