Donald Trump and the Orange Mystery of the White House 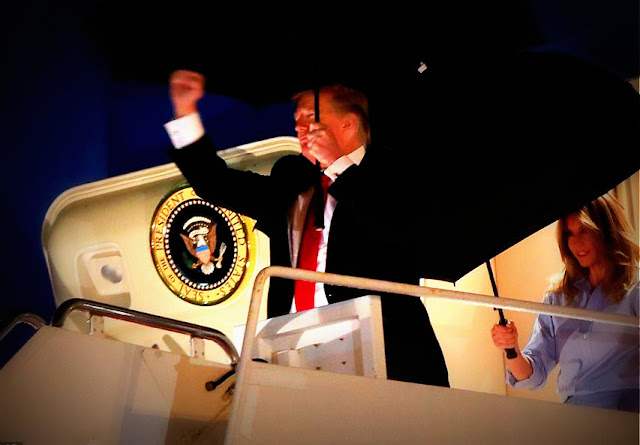 As soon as he stepped out of Air Force One at the Palm Beach International airport, Donald Trump couldn't hold back his joy.

After more than a month in freezing grey Washington, he was back at his beloved Mar-A-Lago.

Free to play golf and work on his tan.

Except that while his golf game is probably a little rusty.

His tan is already picture perfect. 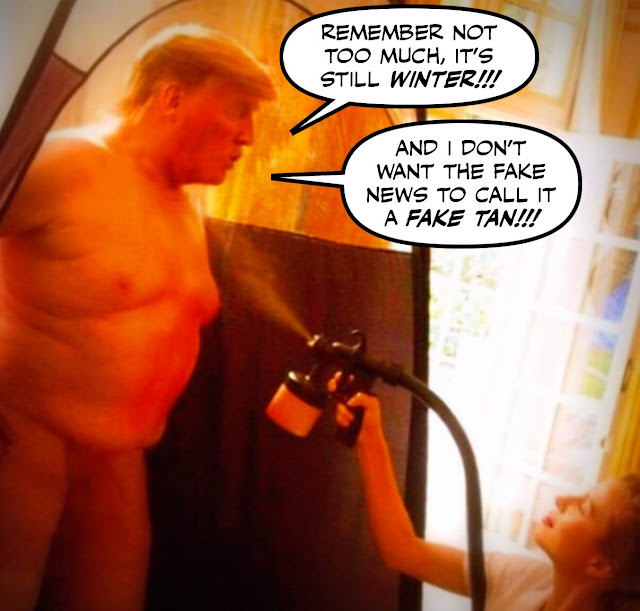 Yes, it's true. As orange as a Florida orchard, as red as a monkey's behind.

But don't try to find out how he does it, because apparently it's a state secret.

In a town where not even the longtime operation of the federal government seems certain, Mr. Trump has adhered to one constant: a conspicuously sun-kissed glow, one that has shone like a stoplight against Washington’s graying backdrop. Much like Warhol’s shock of white hair or Big Bird’s saffron plumage, the president’s vibrant hue is so consistently present and meticulously maintained that it was a culturally embedded representation of him long before he entered politics.

The official line from the White House, as with other matters surrounding the president’s physical health and appearance, is that Mr. Trump’s glow is the result of “good genes,” according to a senior administration official who would speak only on the condition of anonymity.

So is there a tanning bed hidden somewhere in the White House as James Comey once suggested?

The president’s “face appeared slightly orange,” Mr. Comey wrote in his memoir, “with bright white half-moons under his eyes where I assumed he placed small tanning goggles.”

And does Trump spend as much time fixing his face, as he does fixing his hair? 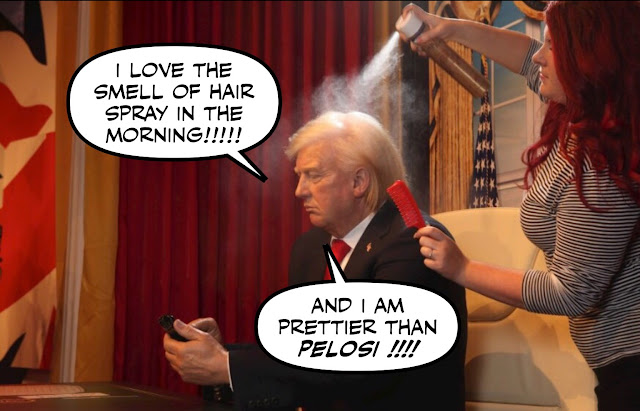 Trump has repeatedly documented the act of self-styling his coif, a process he has not strayed from in decades. His system includes a Head & Shoulders shampoo and an hourlong air-drying of the strands while he peruses newspapers or watches television. And tweets.

I guess the only way to find out what really happening is to get a job at the White House.

But as Family Guy found out, that could be dangerous...

If you thought the scenes of Trump swirling his hair around like a gorgon, or Justin Trudeau flying off on two Canada geese was funny, there's also this:

The religious fanatics and uber homophobic One Million Moms think that episode is disgusting.

Fox’s “Family Guy” is encouraging violence, and almost every scene is filled with crude language, sexual innuendos, implications, or graphic encounters. It is almost impossible to describe the depth of depravity found in the Fox program "Family Guy." No child should be subjected to this vulgar content in this outrageous show

So let me get this straight. One Million Moms will enthusiastically fanatically support the sleazy, misogynistic, pussy grabber, but they want to censor a cartoon?

Oh boy. Only in America

Or in Andrew Scheer's Canada... 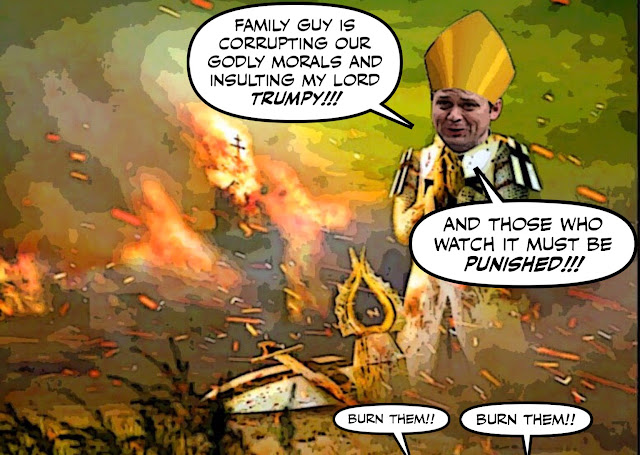 And have a great weekend everybody..
Posted by Simon at 7:25 PM

Well, we know Harper paints Andy's diabolical dimples on. As to who puts on Harper's Lego hair in the morning, I dunno: Baird? Novak? Whoever's on his staff to empty his litterbox through the night?

I can't deal with the level of stupid coming from people. Now there's conspiracy theorists accusing Trudeau of snuffing out the Auditor-General. Media continues to be spineless and silent as the cheaters work the referee.

This is going to be the longest and most grueling nine months for anyone who hasn't been through labor.

one could look at it this way, trump will be forever punished by not having enough hair for a proper "do" and he is desperate to look like he has enough hair. It may not be much, but it will do as punishment in the meantime and his having a permanent orange look to him. omg, doesn't matter how powerful he is, he is never going to look good. He will always be known to some of us as the "orange maggot" he does not look good. he looks oily

My barber has speculated that Harper uses cement on his hair but I am dubious.

We need to worry when Jordan Peterson spends an hour or more talking to Doug Ford. Ford is just the type to fall for some of Peterson's xenophobic, misogynist, lobster-loving facile philosophy.

I've taken the comments from the million moms and slightly altered it to show their ridiculous hypocrisy.
"Donald Trump is encouraging violence, and almost every rally is filled with crude language, sexual innuendos, implications, or graphic encounters. It is almost impossible to describe the depth of depravity found in the President's words. No child should be subjected to this vulgar content by this vulgar President."
As you said, Simon, only in America.
JD

Lego hair a Simpson Ha Ha to that.

Well at least Trump is not perpetually black dyed like Ronald Reagan and to wonder if he used chemicals was treason. Trump is destroying the Republican party, destroying America's reality distortion field and opening the world up for something new. Will it be better? As Bruce Cockburn said " the trouble with normal is it always gets worse" and that was 20 years ago. John Prine always comes to the resuce in moments like this.
"Common sense it makes no sense no more"